Can guidelines direct our strategy?

When presented with bleeding trauma patients, our management strategy may be directed by guidelines, e.g. the European trauma guideline (Rossaint et al. 2016). This recommends treatment with fibrinogen concentrate or cryoprecipitate if significant bleeding is accompanied by viscoelastic signs of a functional fibrinogen deficit or a plasma fibrinogen level of less than 1.5–2.0 g/L. An initial fibrinogen supplementation of 3–4 g is suggested, and repeat doses must be guided by viscoelastic monitoring and laboratory assessment (Rossaint et al. 2016).
Guidelines are developed on a scientific empirical basis, but in clinical practice it can be hard to define which patient will bleed in the next 30 minutes with a clinically substantial bleed. The U.S. guidelines recommend 1:1:1 massive transfusion packages (American Society of Anesthesiologists Task Force on Perioperative Blood Management 2015), which have the advantage of additional volume effect, but the disadvantages of side effects of fresh frozen plasma (FFP), time delay, prophylactic transfusion and lower efficacy. The European guideline recommends individualised targeted controlled coagulation management and transfusion, which requires point-of-care monitoring and administration of colloids/crystalloids to give additional volume. The advantages are that no prophylactic transfusion is required, there are fewer side effects of transfusion-related complications and it is efficacious.

The evidence for a 1:1:1 (platelets:FFP:red blood cells [RBC]) ratio in transfusion is that it is not beneficial. Abdel-Wahab and colleagues showed in an audit of patients transfused FFP for mild coagulation values that prothrombin time (PT) was partially normalised in a minority of patients and did not correct the PT in 99 percent of patients, regardless of the number of units of FFP transfused (Abdel-Wahab et al. 2006). Concentration is not increased by transfusing FFP, which has a low concentration of coagulation factor.
Studies on 1:1:1 transfusions have a clear survivor/publication bias, as most studies in support came from war situations, when RBCs were available in 20 minutes and plasma within 90 minutes. The result was not that FFP saved the patient, but that the patients who survived at least the first 60-90 minutes were able to receive the plasma. For example, Snyder and colleagues (2009) found an association between higher FFP:packed red blood cells [PRBC] ratios at 24 hours and improved survival, which after adjustment for survival bias was no longer statistically significant. Manotti and colleagues (2011) analysed outcomes for trauma patients who received massive blood transfusion. Patients who received a higher plasma ratio during the first 24 hours had an improved survival rate, but were in less shock. The authors note: “The proposed survival advantage of a high-ratio may be because of selection of those not likely to die in the first place; that is, patients die with a low-ratio not because of a low-ratio.”
A prospective cohort study of 517 trauma patients in whom FFP and RBCs were administered in fixed ratios found that fibrinogen was always low at admission, and they needed to administer cryoprecipitate to increase fibrinogen levels (Rourke et al. 2012). In patients with low fibrinogen at admission mortality was increased, while patients who received cryoprecipitate had improved survival.
Frith and colleagues (2015) analysed thrombin generation parameters in 440 trauma patients following FFP transfusion in a RBC:FFP:platelets ratio of 1:1:5. Both patients with and without acute traumatic coagulopathy had low thrombin generation after receiving four units. Both groups had a further 25% decline in thrombin generation during the next four units, so conventional haemostatic resuscitation failed to support the thrombin generation required for fibrinogen conversion.
Khan and colleagues, in an international prospective cohort study, drew a blood sample when trauma patients arrived at the hospital, and after 4, 8 and 12 PRBC transfusions in 160 patients. The percentage of coagulopathic patients went up the more transfusions were received (58% after 4 PRBC, 81% after 8) (Khan et al. 2015).
Nascimento and colleagues compared the effect of a fixed-ratio (1:1:1) transfusion protocol vs laboratory-results-guided transfusion in 78 patients with severe trauma (Nascimento et al. 2013). They concluded that the 1:1:1 protocol could be exposing patients not only to unnecessary blood transfusion but also to increased risk of acute respiratory distress syndrome, sepsis and multiple organ dysfunction.
The Prospective, Observational, Multicenter, Major Trauma Transfusion (PROMMTT) Study compared the effectiveness of early transfusion of plasma and/or platelets to time-varying plasma:RBC and platelet:RBC ratios, with the primary outcome of in-hospital mortality. Higher plasma and platelet ratios early in resuscitation were associated with decreased mortality in patients who received at least three units of blood products over the first 24 hours after admission. In patients who survived 24 hours, the subsequent risk of death by day 30 was not associated with plasma or platelet ratios, however (Holcomb et al. 2013).
The Pragmatic, Randomized Optimal Platelet and Plasma Ratios (PROPPR) trial compared transfusion of plasma, platelets and red blood cells in a 1:1:1 vs 1:1:2 ratio and found no difference in mortality at 24 hours or at 30 days (Holcomb et al. 2015). More patients in the 1:1:1 group achieved haemostasis and fewer experienced death due to exsanguination by 24 hours.
Formula-driven protocols are not effective to reverse coagulopathy, and result in high complications. FFP transfusion increases the risk of hospital-acquired infection by three (Sarani et al. 2008). Dara and colleagues (2005) found no difference in new bleeding episodes, but new-onset acute lung injury was more frequent in the transfused group (18% vs 4%, p = 0.21). The more plasma used, the more complications. Watson and colleagues (2009) showed that each unit of FFP transfused was associated with a 2.1% higher risk of multi-organ failure (MOF) and 2.5% higher risk of ARDS.

The alternative to 1:1:1 transfusion is to give plasma first in hypovolaemic situations and then on top factor concentrates. Innerhofer and colleagues investigated exclusive use of CFCs in 144 trauma patients with similar ISS (37-38). One group received coagulation factor (CF) only and the other group was treated with CF+FFP in the emergency room (ER). The primary outcome was the response profile for coagulation parameters and secondary transfusion rates and outcome. Table 1 shows the transfusion requirements in the first 24 hours. Table 2 shows the outcomes. 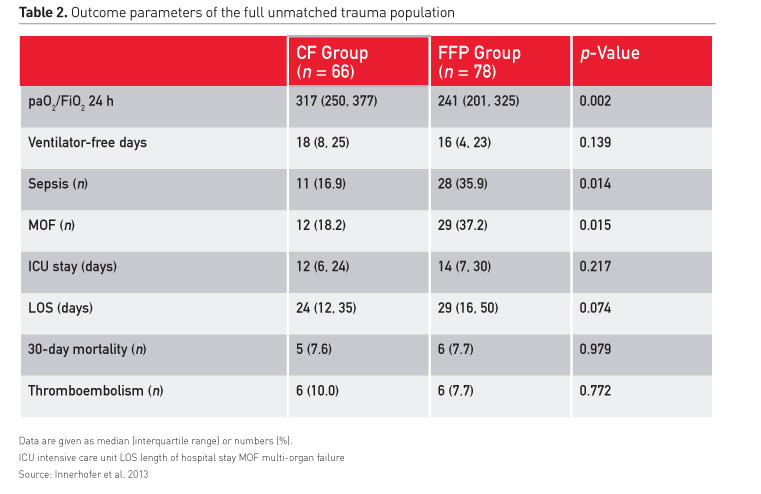 Outcome was worse in the group that received FFP additionally, and there was more ARDS, more MOF, more sepsis, and by day 30 increased mortality. The use of CF alone effectively corrected coagulopathy in patients with severe blunt trauma.
In the RETIC single-centre open label parallel-group crossover study (Innerhofer et al. 2017), patients who were coagulopathic in the ER were randomised to receive FFP or CFC and were monitored for incidence of MOF. Patients who received initially coagulation factors had 50% less massive transfusions. Bleeding was increased in coagulation factor-treated patients, especially those patients who received some kind of rescue therapy. The group treated with plasma and then with coagulation factor had a higher MOF score.
Therefore a 1:1:1 transfusion protocol is ineffective, but FFP initially and then coagulation factor concentrates also result in higher mortality and higher numbers of massively transfused patients. 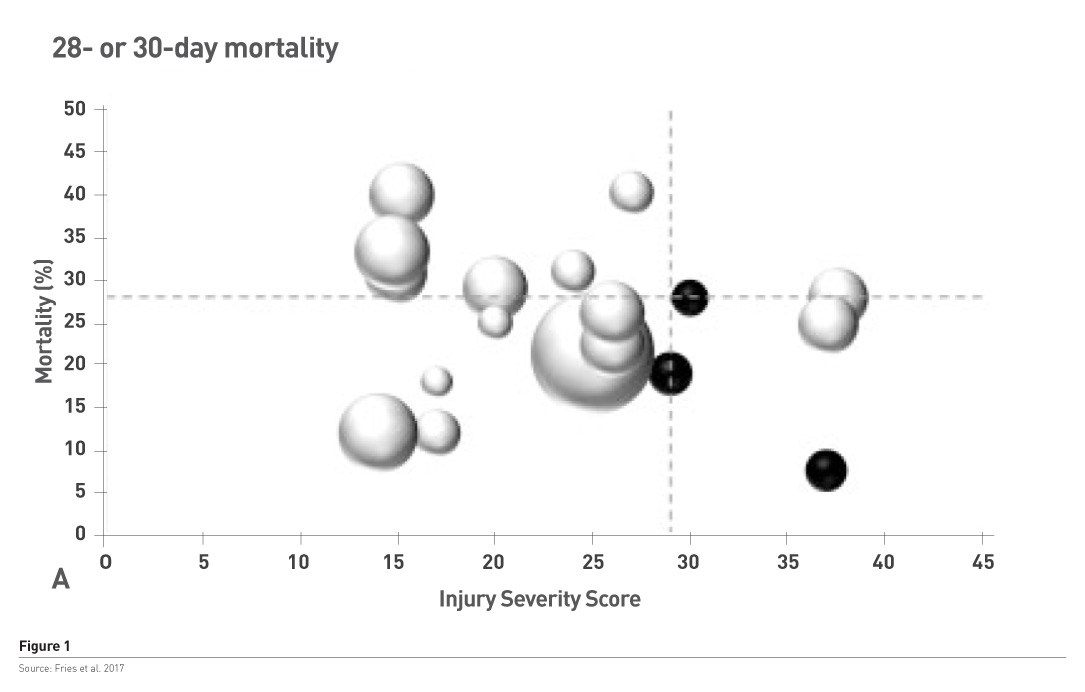 Coagulopathy During Cardiac Surgery: The Role of Factor Concentrates

The fifth edition of the European Trauma Treatment Guidelines that have already been cited 1650 times and downloaded... Read more

Point-of-care ultrasound (POCUS) is an invaluable tool to differentiate the various types of shock which may co-exist in... Read more

Caring for very old patients in the ICU

Describes the epidemiology and outcomes for very old patients as known in 2018, along with a short introduction to the... Read more