How to manage severe dengue infection

Share
Download Article Back
A review of diagnosis and treatment of dengue, a mosquito-borne febrile illness caused by flavivirus with a clinical spectrum ranging from self-limited fever to dengue haemorrhagic fever with shock.

Dengue is a febrile illness, caused by one of the serotypes of Flavivirus (DENV1-4), transmitted by Aedes aegypti and Aedes albopictus mosquitoes during a blood meal (Simmons et al. 2012; Guzman et al. 2015; Pai-Dhungat et al. 2013). The vectors live in an urban habitat and are daytime feeders. Aedes albopictus is now spreading to North America and Europe due to international trade. The island of Madeira, Portugal, and five other European countries have witnessed an outbreak of dengue (Guzman et al 2015).

The World Health Organization (WHO) currently estimates there may be 50-200 million dengue infections worldwide every year. Half of the world’s population living in endemic areas is at risk (Pai-Dhungat et al. 2013). Recovery from infections in one serotype provides lifelong immunity against that serotype. However, cross immunity is only partial and temporary. Subsequent infection by either serotype increases the risk of developing severe dengue.

As per the WHO 1997 classification, dengue comprises a clinical spectrum, which consists of

The revised WHO classification scheme (2012) consists of

Expanded dengue comprises unusual or atypical manifestations of dengue which can happen in the absence of plasma leakage.

The differentiating features of dengue with warning signs consist of haemoconcentration with a more than 20% rise in haematocrit, pleural effusion and ascites secondary to plasma leakage because of increased vascular permeability.

After the virus is introduced into the skin by an infected mosquito, viraemia is detected from 6 to 18 hours before onset of symptoms and ends as the fever results. Both innate and adaptive immune responses play a role in clearance of infection. Virus-specific T lymphocytes response and antibody-dependent enhancement of infection decide severity of the infection. Plasma leakage, haemoconcentration and abnormalities in homeostasis characterise severe dengue.

A transient and reversible imbalance of inflammatory mediators, cytokines and chemokines occurs during severe dengue, probably driven by a high early viral burden, and leading to dysfunction of vascular endothelial cells, derangement of the haemocoagulation system, then to plasma leakage, shock and bleeding.

During the first week of illness: 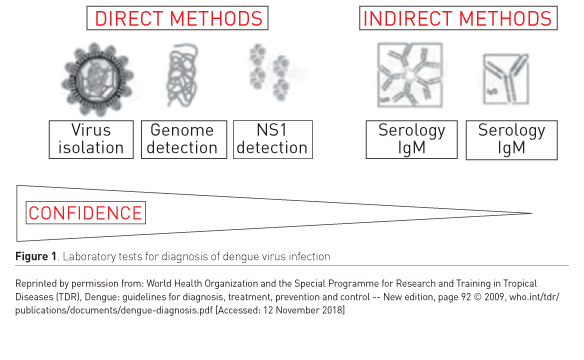 Liver tissues have highest yield. This is rarely indicated.

Treatment according to groups A to C:

Group A: Patients who may be sent home (outpatient management) Group B: Patients with warning signs, co-existing conditions and those with social circumstances need inhospital management for close observation.

Further divided into patients with compensated and uncompensated shock (Figures 4-5). 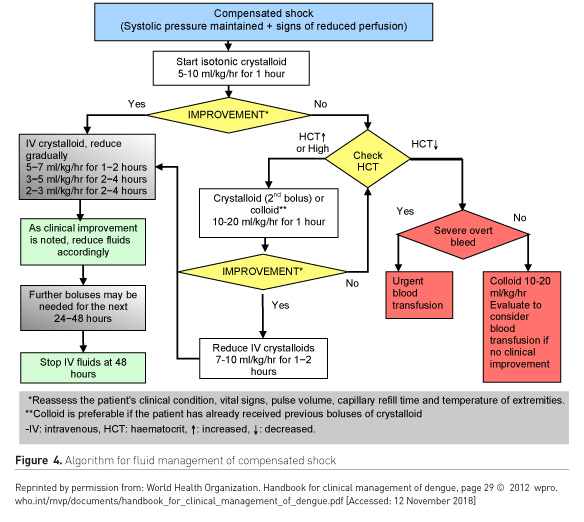 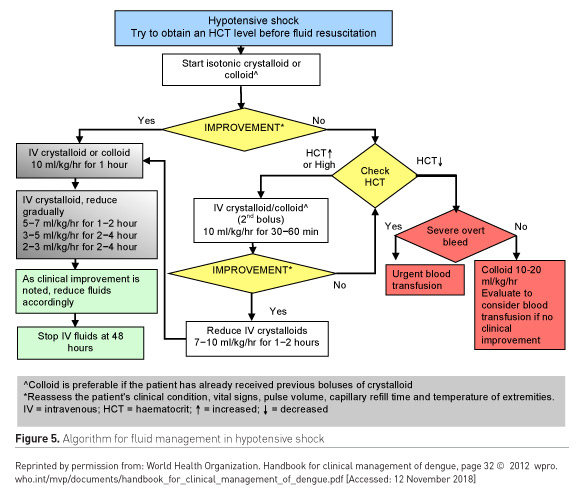 When to stop IV fluids

Prophylactic transfusion of platelet concentrates in absence of bleeding, even if profound thrombocytopaenia and use of steroids, unless proven haemophagocytic syndrome, has not been shown to improve outcome (Dondorp 2016).

Both hypoglycaemia and hyperglycaemia can occur in the same patient during critical phases.

Electrolyte and acid base imbalances

Dengue, as a mosquito-borne disease, can be prevented by effective mosquito control measures and vaccine development, which is under evaluation. Suspected dengue cases should be assessed carefully and directed to the appropriate care setting. Early recognition of severe dengue infection is essential as it needs prompt initiation of more aggressive therapy. Outpatient management is appropriate for patients without warning signs, with plenty of fluids and advice to watch for signs of dehydration, clinical deterioration or lack of improvement with defervescence or impending shock. Inpatient management is warranted for patients with dengue with warning signs, severe dengue infection or with coexisting conditions. They should be closely watched for signs of bleeding or worsening shock. Thus, high clinical suspicion, appropriate diagnostic measures and treatment at the right time is the key to achieve good outcomes in these patients and reduce morbidity as well as mortality.

dengue A review of diagnosis and treatment of dengue, a mosquito-borne febrile illness caused by flavivirus with a clinical spectrum ranging from self-limited fev...