Distributing a life source in Africa

To what degree has the blood shortage in Nigeria been tackled so far, due to the work of LifeBank?

It’s a very small degree to be perfectly honest. It’s such an endemic problem that it would be such a difficult thing to say that we solved the problem in two years. We’ve saved about 4,000 people from dying. I don’t think we’ve solved the problem significantly, but we’re on our way to solving it. We have the determination that can solve it. And now we need to figure out the skills set in Nigeria, and get the investment we need to do that.

Have you reached your goal so far?

Absolutely. We set out to prove that you could build a business that is valuable, that solves this problem. We feel very confident that we’ve met our goals.

How does the LifeBank process work? How have you made use of innovative technology?

It starts with the people who have the blood—the blood banks. When they get to work in the morning, they list their products with us, so that gives us an inventory of how many units of blood are available in parts of our community. We have a map and database that has a list of all the blood that is available in the parts of our community—very simple. Then we deploy this information into the hands of the hospitals who need the blood. Whenever any hospital needs blood, they contact LifeBank, and we get them the blood they need. They can contact us, either via a phone call—we have a 24/7 call centre—or they can use our web app. It is a very simple app; it just requests certain things from the person requesting the blood. As from the beginning of March, hospitals are now also able to connect with us using an Unstructured Supplementary Service Data (USSD) platform. This USSD platform allows people who don’t have an internet connection to still communicate with one another, using the mobile phone network. So hospitals and clinics can still make purchases using USSD. 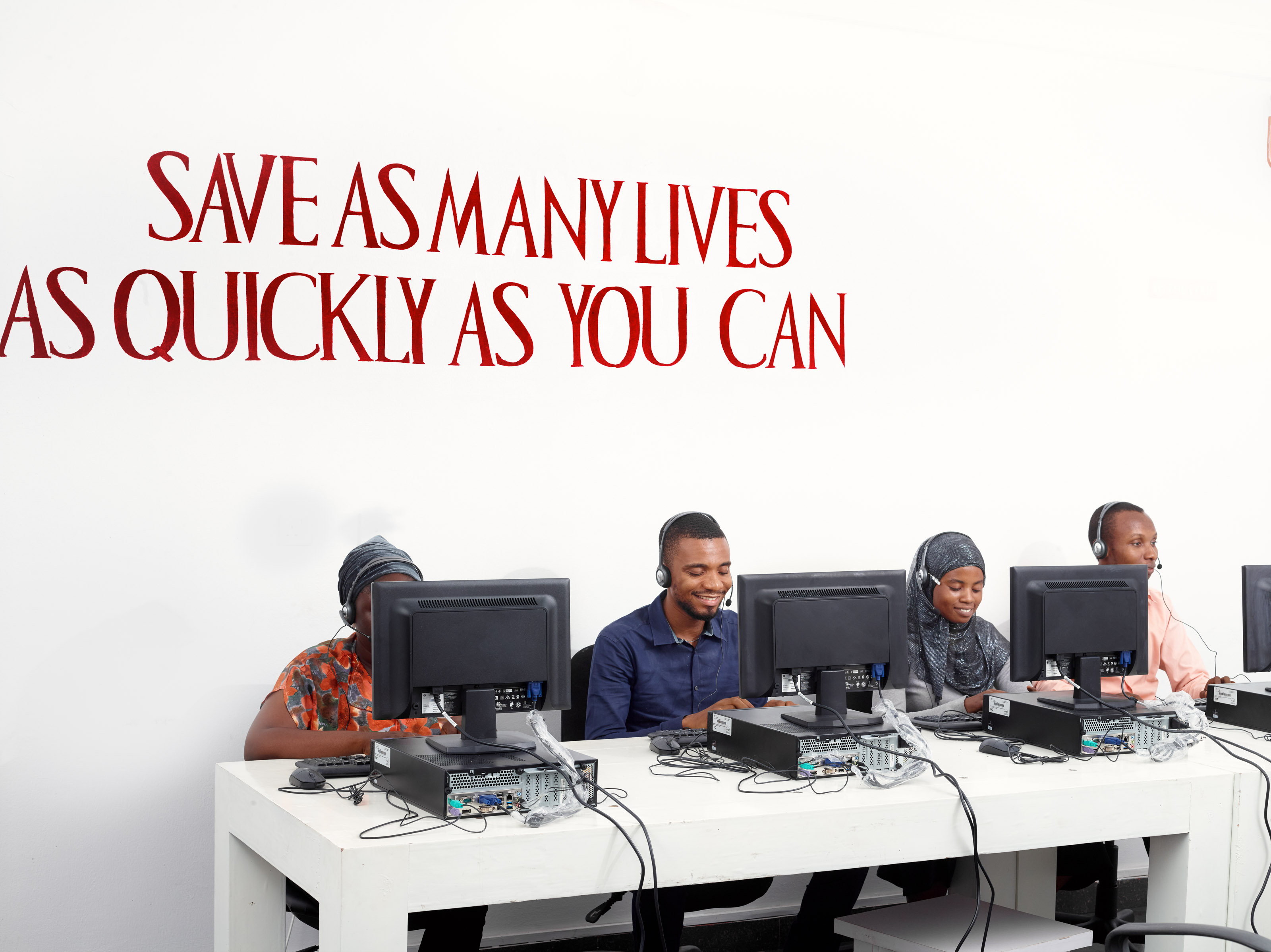 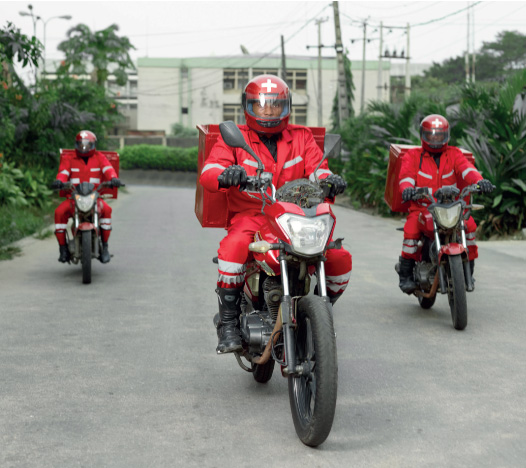 How vital is LifeBank in providing an effective supply chain?

We’re essentially a distribution company that distributes these products to the people who need it, in the right conditions and on time. The first thing we do is we connect blood banks to blood donors. People who are interested in becoming blood donors can register on a different app that we run, and it connects them to blood banks. Then, after blood banks have collected, stored and tested the blood, we connect them to the hospitals. So we are basically the conduit that was missing before, we connect everybody in this blood chain and make sure that patients, at the end of the day, get the blood they need.

In what other healthcare areas do you think technology, smart logistics, and big data can be applied to deliver a seamless health supply-chain system across Africa?

I think it could be very useful in various sectors of healthcare. I think this kind of distribution could be helpful with vaccines, organs, oxygen and medical samples. I think it could be really interesting with things like drugs and supplies, such as insulin, anti-venom, anti-rabies, basically anything that patients need and anything that hospitals generally don’t like to stock in the hospital. I think our innovation can be absolutely useful for things like that.

Will LifeBank branch out from the distribution of blood to organs and other essentials for hospitals?

We’re already working on it! We are going to launch new operations in a few months. We want to move vaccines, organs and oxygen, and basically anything that hospitals need that they cannot find.

Is the goal for the LifeBank enterprise to be eventually deployed across Africa?

We would like to. Our big, ambitious goal is to be in every village and every last mile in Africa, and to be able to distribute these essential medical products to every single hospital on the continent. That’s our big goal and we’re working towards it.

Why do you believe social enterprises such as LifeBank are so important to healthcare in Nigeria and in other countries?

That’s a very good question. I have a strong belief in businesses. I think businesses can help to solve unique and major problems in Africa, and in the developing world in general. I think the businesses that have a social niche can be absolutely the best way to solve a lot of these problems that we’ve been dealing with for so long. I think that having a business model ensures longevity. It allows you to continue solving this problem over time. It allows you to completely focus on the problem and deliver value to the people who need the value the most. And the reward you get for delivering value is money, and that money allows you to be sustainable, to sustain your ambition. I feel very strongly that businesses with social impact can be a significant way of solving an endemic and entrenched problem, especially problems around infrastructure, and that includes infrastructure within healthcare.

How have you and your team encouraged people to donate blood, and what methods will you use to continue to do so in the future?

I don’t think we have actually encouraged people to do this, as I think people always wanted to give blood, but they just didn’t know how. If you talk to most people in Nigeria, and you tell them how many people are dying in Nigeria every year because they have no blood, and you tell them they have the power to change that, I think most people are really interested to solve the problem. The problem in the past has been giving them the right tools, the right places, so they can go and actually give the blood. I think that’s what we’ve been able to do very well.

What are the biggest organisational and managerial challenges you have faced within LifeBank?

Building infrastructure in a community that has no infrastructure and no history of infrastructure. I think it’s actually very difficult.
One story I found interesting was from Jeff Bezos, Amazon CEO. He recently spoke about when he started Amazon.com and said that when he got his first order, he just took it to his local post office and his local post office was able to get it to where it was needed. I just thought that was so fascinating. There’s such a thing in Nigeria where if you want to open a bookshop, if you want to distribute blood, if you want to distribute anything—in fact it’s the same across the continent and in any developing country—you basically have to create your own infrastructure, your own distribution system. When we launched, we originally wanted to be just an app, and not a distribution company or a logistics company, but we realised we just couldn’t move away from a distribution and supply chain. And that’s how we came to where we are. I think that’s the biggest challenge. And if you know logistics, then you know it’s actually quite difficult to build, especially on the African continent. One of the challenges we have is to find enough capital—capital that will allow us to grow in a way that is sustainable.

What is your leadership style and what advice do you have for other leaders and managers? Any advice specifically targeted at female leaders?

I think women lead differently to men. I think my style is more collegial. Although I’m trying to make it a little bit less so, just to have a good balance between structure and getting along. I think my leadership style is more collegial and not autocratic in any way. The good thing about that is that it allows employees to take responsibility. I’m not giving anyone orders, I give them responsibilities, and I hold them accountable for the responsibilities I give them. I think that’s absolutely important, and an interesting way to lead, in preference to shouting or telling people exactly what to do. I think it’s important to allow people to rise to the occasion, to give them additional responsibility, and to allow them to grow into the jobs they have. So that’s been my big leadership style.
I think, generally, women tend to be like that, and I don’t think there’s anything wrong with that. I don’t think women should emulate other people’s, or the other gender’s leadership style. I think we should have our own way of leading, and I think we should understand that there are good parts about running a more collegial, more open and more diffused leadership system, instead of having it always top down where the CEO tells everybody what to do. I think sometimes we women feel like we have to learn and pretend to be men at work, but I don’t think that’s necessary. I think the world would be a better place and people would be treated very well and very kindly. I think the most important thing is that women should understand their own leadership style and make sure they are looking at their blind spots. If, let’s say, you’re very collegial, make sure that as you’re being collegial, as you’re allowing your staff to take responsibility for parts of the business, you also make sure you hold them responsible for those parts. And if you’re more autocratic, then also ensure that you’re creating a structure in which the people you’re leading can also learn and grow in their jobs. I think you should own whatever leadership style you have.

I think the biggest reason for that is that we had no money. When we launched, we launched literally with $35,000, and we made that last for two years. And because we had no money, everyone had to be super committed to the customers we had. We had to make sure that we were servicing them very well. We had to make sure we were focused on giving the best service we could to them. So that lack of money created a hyper focus on customer service, but also on excellence. We had to make sure that the little money we had went a long way. So that is what I think has made LifeBank so awesome—that hyper focus on our customers, and the fact that we are very excellent at discipline in terms of our operations.

How many people do you have working within LifeBank, and how many do you hope to expand this to?

We currently have about 22 staff, and in the next few years we’re going to expand to about 50 people. Challenges in the Management of the Critically Ill Patient

Is the gender gap a concern for intensive care medicine (ICM)? ICM is not gender friendly by design and this could have a... Read more