Share
Download Article Back
Ultrasonographic assessment of the neck vessels in critically ill patients contributes to rapid and non-invasive management of fluids to evaluate responsiveness and tolerance and blood volume status.

For a long time, placing a central venous catheter to measure CVP or placing a catheter in the pulmonary artery to measure pulmonary artery occlusion pressure were parameters to decide upon the administration of IV fluids in shock patients (Rivers et al. 2001); in present day, CVP is considered a reference point to stop IV resuscitation, in addition to evaluating venous congestion; later, the dynamic variable PPV was widely used to assess fluid responsiveness (Michard et al. 1999; Yang and Du 2014). Both techniques have the disadvantage of requiring an invasive device; furthermore, they imply additional financial costs. In the last decade, point-of-care ultrasound (POCUS) has been proposed as a non-invasive, low-cost device to evaluate fluid responsiveness and tolerance, such as the assessment of the inferior vena cava (IVC) and transthoracic echography (TTE), which require some degree of expertise; nonetheless, neck vessels are relatively easy to assess with ultrasound, and may provide prompt information for decision-making in critically ill patients, while properly correlating with other methods.

Positive responsiveness to fluids is defined as an increase in SV of 10 to 15%, and therefore of CO after the administration of an IV fluid challenge, usually 5 to 10% of the estimated blood volume. The neck is an accessible anatomical region in most critically ill patients in Intensive Care Units (ICU), emergency departments (ED) and operating rooms (OR), unlike the ultrasonographic evaluation of the IVC and transthoracic echocardiography which may not be feasible or may be technically difficult to obtain images from, such as in patients with abdominal or chest pain, patients with abdomen or chest surgeries, patients on mechanical ventilation (MV) or on prone position, obese or ascites patients, or patients with chest wall deformities or with a poor anatomic window. Performing an ultrasonographic scan to the internal jugular vein (IJV) and the common carotid artery (CCA) could be much easier and faster than other methods and may provide valuable information to manage fluid therapy in critically ill patients, particularly in patients with circulatory shock (Table 1). 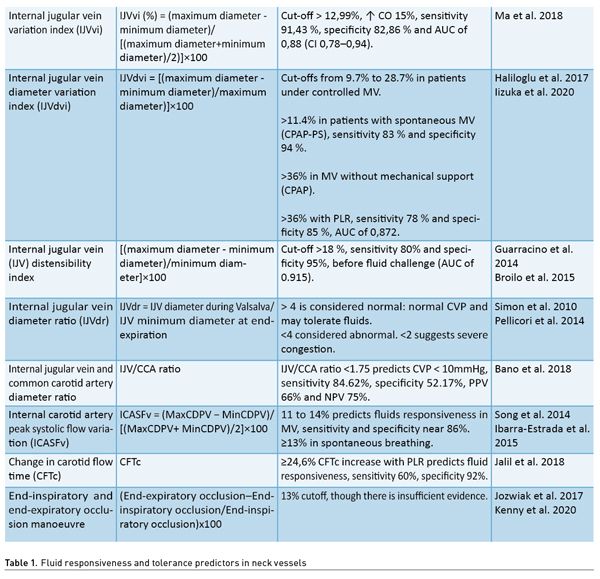 Evaluation of Fluid Responsiveness With the Internal Jugular Vein

IJV is a superficial vessel that lies beneath the sternocleidomastoid muscle, and it can be easily observed with an ultrasound. Cyclic changes in the pressure and volume of the intrathoracic systemic venous compartment induced by mechanical ventilation or spontaneous breathing can be transmitted to extrathoracic veins, which makes the evaluation of blood volume possible.

For this approach, a high-frequency linear transducer (10 MHz) with B and M modes is required. With the head of the patient at 30 to 45°, the transducer is placed transversely to the trachea at the level of the cricoid cartilage, to subsequently slide laterally to the line that goes along the angle of the mandible until observing the IJV and the CCA, the former being usually more lateral, of greater diameter, oval in shape, collapses on compression, distends with Valsalva manoeuvre, has a continuous flow and has thinner walls compared with the CCA. Once the image of the jugular vein is cantered, caution must be taken not to press it with the transducer to avoid unnecessary manipulation, in order to reduce the risk of a vasovagal reflex; for these purposes, we suggest leaning the operating hand in some bone structure or on the patient’s bed. We then switch to M-mode and measure the maximum and minimum IJV diameter.

IJVdvi measurement can be performed with the formula: [(maximum diameter–minimum diameter)/maximum diameter)] ×100. Also known as IJV collapsibility index, it predicts adequate fluid responsiveness with cut-off points from >9.7% to >28.7% in patients under controlled MV, >11.4% in patients on spontaneous mode MV, and >36% in patients without MV (Haliloglu et al. 2017; Iizuka et al. 2020).

IJVdvi has also been described with the following formula:

Note: multiple authors describe internal jugular vein diameter variation as “collapsibility” or “distensibility” according to the phase of the respiratory cycle and MV mode, which may lead to confusion, thus we propose to only name it as internal jugular vein diameter variation index (IJVdvi), whilst taking into consideration the cut-off points referred to in the studies according to the type of patient.

It has been determined that a CVP >8mmHg is associated with greater risk of acute kidney injury, while CVP >10 mmHg has been associated with greater mortality risk. The previously proposed goals of 8-12 mmHg in early resuscitation in patients with sepsis are no longer recommended. One proposal to assess the systemic venous congestion is the IJV diameter ratio (IJVdr), which is the ratio between the maximum IJV diameter during Valsalva manoeuvre and the resting diameter at the end of the expiratory phase. It can be performed in patients without MV, with a low inter-rater error bias. Even in patients with heart failure, a good correlation with NT-proBNP plasma levels has been documented, with a cut-off point of <2 (Simon et al. 2010; Pellicori et al. 2014). Resting IJV diameter is low (0.10-0.15cm), and it usually increases up to 1 cm during Valsalva manoeuvre; this is similar between patients with and without heart failure. Normal IJVdr is >4, which identifies patients who have normal CVP and who may be able to tolerate fluids. When IJVdr is <4, it is considered abnormal, and if it reaches <2, it is considered a case of severe congestion. IJVdr calculation is performed with the following formula: IJV diameter during Valsalva/ IJV minimum diameter at the end of the expiration. Another alternative method to estimate CVP is the measurement of the internal jugular vein and common carotid artery diameter ratio, which is known as the IJV/CCA ratio, with a cut-off point of <1.75 to predict CVP <10 mmHg with sensitivity of 84.62% and specificity of 52.17%, positive predictive value (PPV) of 66% and negative predictive value (NPV) of 75% (Bano et al. 2018). Measurement of anteroposterior IJV diameter (AP-IJVd) measured at 2 cm above the clavicle, also correlates with CVP. An AP-IJVd <7 mm adequately correlates with a CVP <10 mmHg in patients without MV in the supine position (r= 0.92) (Donahue et al. 2008).

It is important to mention the limitations that the assessment of the IJV has, which are similar to that of the assessment of the IVC and the CVP. Any increase in the intrathoracic pressure can generate IJV distensibility and therefore underestimate its variation as occurs in mechanically ventilated patients with high positive end-expiratory pressure (PEEP), tension pneumothorax, severe air trapping, venous outflow obstruction such as venous stenosis, superior vena cava syndrome, cardiac tamponade, severe tricuspid regurgitation, heart failure, low lung compliance, arrhythmias, or jugular vein thrombosis. In the case of patients with spontaneous ventilation with vigorous respiratory effort, modifications in the IJV diameter will be significant and may overestimate its variation.

Evaluation of Fluid Responsiveness With the Internal Carotid Artery

CCA is another superficial, easy-to-access vessel for ultrasonographic assessment. It has been shown that in shock patients, deviation of blood flow is greater in this territory, which confidently reflects the status of systemic resistance and the respirophasic variation of SV.

To perform this evaluation, a linear transducer and pulsed Doppler are required. With the head of the patient at 30°, the transducer is placed in the longitudinal plane of the internal carotid artery with the probe orientation marker towards the patient’s head, and pulsed Doppler is applied placing the sample volume at the centre of the vessel lumen with angle correction, observing the trace of the systolic flow spectrum and its variance with the patient’s respiratory cycle (Figure 1). Preferably, the sampling sweep is increased to more easily observe the peak systolic flow velocity (PSFV); the one with the highest velocity is identified and compared with the one with the lowest velocity by using the following formula:

Another assessment which is not affected by changes in spontaneous breathing is the measurement of the change in carotid flow time (CFTc), by measuring the maximum velocity; subsequently, passive leg raising is performed for 60 seconds. An increase in CFTc of more than 24.6% is expected in order to consider fluid responsiveness, with sensitivity of 60% and specificity of 92%. 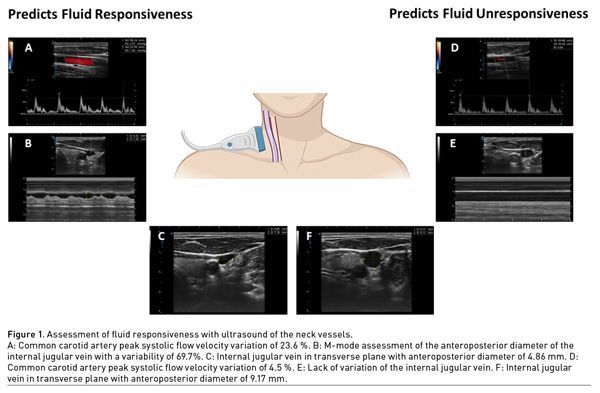 On the other hand, in patients who are under MV, the end-inspiratory and end-expiratory occlusion manoeuvre can be performed, with a separation of 15 seconds, observing the pattern of change in pulsed Doppler flow velocity of the carotid artery with a cut-off point of 13% for precise fluid responsiveness prediction (Jalil et al. 2018).

The most important limitations of this technique, which can decrease its clinical predictive value, can be recalled with the mnemonics “LIMITS”- L: Low heart rate (HR)/respiratory rate (RR) (for instance, severe bradycardia, high ventilator frequency), I: Irregular heartbeats, M: Mechanical ventilation with low tidal volume or high total PEEP, I: Increased abdominal pressure, T: Thorax open, and S: Spontaneous breathing (Michard et al. 2015), which is why it is advisable to use at least two assessment techniques of fluid responsiveness to increase certainty in evaluation and clinical judgment (Michard et al. 2015).

Neck vessels ultrasonography is a simple, non-invasive technique that allows for evaluation of fluid responsiveness and tolerance in critically ill patients.


Speed of Cooling After Cardiac Arrest: Sub-study from TTM-2 Trial »»

Bedside Point-of-Care Ultrasound Use in the Critically Ill

Historical Perspectives and a Path Forward Critical Care Ultrasound is a rapidly evolving field with an ever-expanding footprint... Read more

POCUS in Critical Care Physiotherapy: Give Me Sight Beyond Sight

An overview of the main ultrasonographic tools that allow physiotherapists to improve their evaluation in the critical patient,... Read more

Imaging is integral to managing critically ill patients in the ICU as it is a key source of diagnostic information to guide... Read more