Share
Download Article Back
A third anniversary update on the findings of the INTUBE study, a large international prospective observational study aiming at collecting data on peri-intubation adverse events in critically ill patients.

Tracheal intubation in critically ill patients is among the most commonly performed and high-risk procedures (Russotto et al. 2019). Until now, information on peri-intubation adverse events was limited to data from single-centre, national level or retrospective studies.

In 2018 we launched the INTUBE study, a large international prospective observational study aiming at collecting data on peri-intubation adverse events in critically ill patients. In this third anniversary update we are pleased to describe our journey and our findings from the primary analysis recently published in JAMA (Russotto et al. 2021).

We excluded patients undergoing intubation to receive general anaesthesia, patients intubated during cardiopulmonary resuscitation for cardiac arrest and out-of-hospital intubation. One hundred ninety-seven centres from 29 countries across five continents joined the INTUBE family, making this the first study providing data not only from Europe, US and Australia but also from Asia, South America and Africa. A total of 2964 patients were finally enrolled. The primary reason for intubation was respiratory failure in 52.3% of patients, followed by neurological impairment in 30.5% and cardiovascular instability in 9.4%. The primary outcome of the study was the composite of cardiovascular instability, severe hypoxaemia and cardiac arrest. Secondary outcomes included incidence of aspiration of gastric contents, difficult intubation, airway injuries and ICU mortality.

Among the study patients, 45.2% experienced at least one major adverse peri-intubation event. The predominant event was cardiovascular instability, observed in 42.6% of patients. Severe hypoxaemia and cardiac arrest were observed in 9.3% and 3.1% of patients respectively. First-pass intubation success was achieved in approximately 80% of patients, a second attempted intubation was necessary for 16%, while 4% of patients required more than two attempts. First pass intubation failure was associated with an increased risk of adverse events. 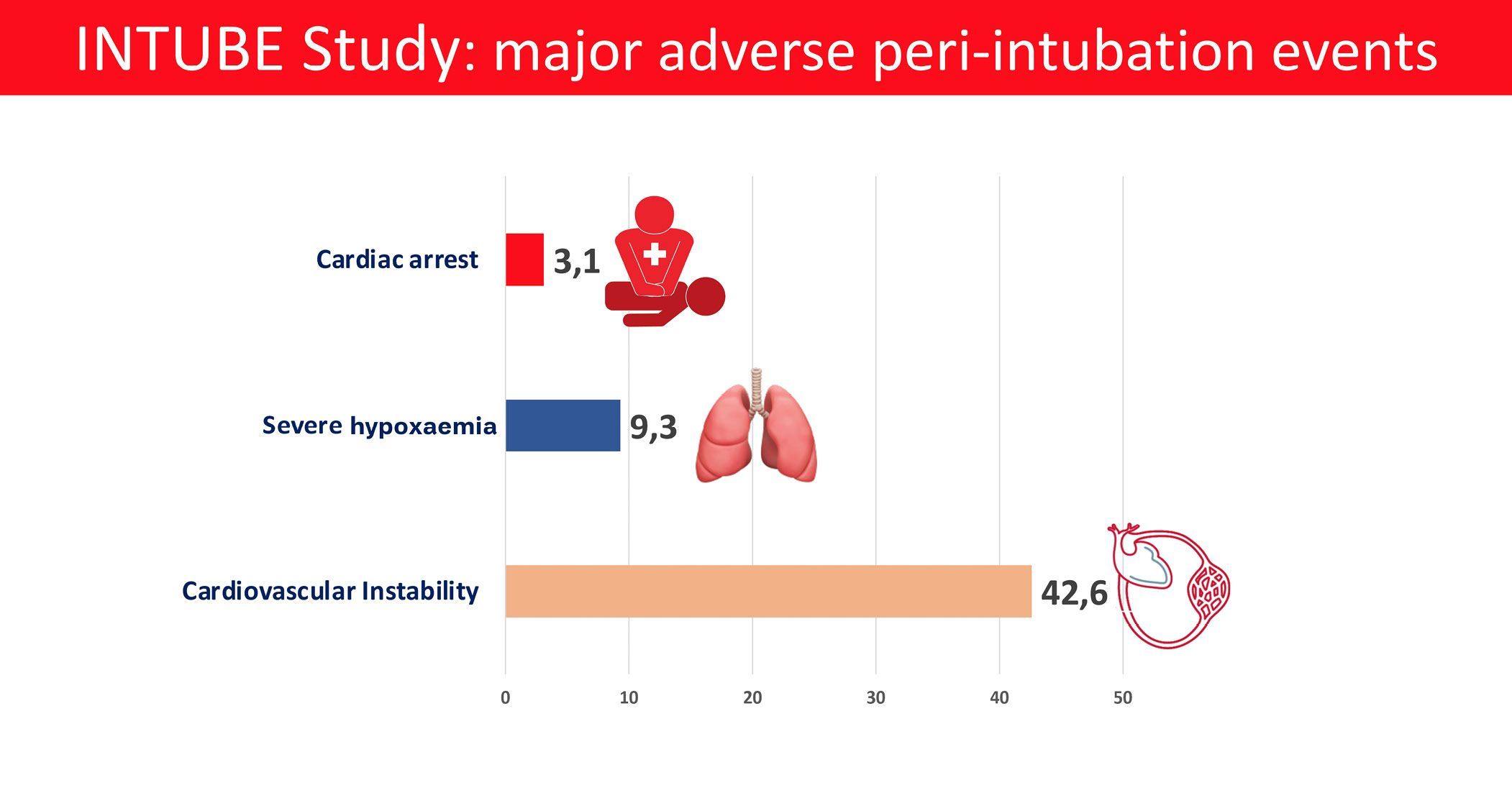 The “haemodynamically friendly” agents ketamine and etomidate were used in 14% and 18% of patients respectively, while propofol, used in 40% of patients, represented the most frequently used induction agent. When administered to patients with underlying haemodynamic instability, propofol was associated with a significantly higher incidence of cardiovascular collapse compared to etomidate.

Videolaryngoscopy has been used as a first-choice method in 17% of patients, in most cases when an anticipated difficult airway was detected.

Another striking observation was the use of waveform capnography as elective method to confirm successful intubation in only 25.6% of overall patients. In 70% patients who had undergone oesophageal intubation, capnography was not used. Although the study was not able to detect a direct association between the waveform capnography underuse and patients’ related outcomes, this observation is of concern. Indeed, it came after 10 years from the publication of the National Audit Project 4 in UK which reported how the majority of catastrophic airway adverse events were associated with either an underuse or misinterpretation of capnography (Cook et al. 2011). The INTUBE study highlights how many recently investigated interventions (e.g., noninvasive ventilation for preoxygenation, apnoeic oxygenation, videolaryngoscopy), are poorly applied in daily clinical practice.

The INTUBE study highlights the high number of major adverse events associated with intubation of critically ill patients. The finding that cardiovascular instability constitutes the leading adverse event underlines the need for future research to optimise peri-intubation haemodynamics to make tracheal intubation in the critically ill a safer procedure.

«« Human Connection in the Time of COVID-19

Diaphragm Ultrasonography in ICU: Why, How, and When To Use It?

An overview of the principles and current applications of diaphragm ultrasound and innovative ultrasound-based techniques.... Read more

Oxygen Therapy in COVID-19 Patients: The Role of HFNC and CPAP

Oxygen therapy and mechanical ventilation in patients with COVID-19 and steps to choose the right therapeutic strategy for each... Read more

Apnoeic Oxygenation for Intubation - Where is the Evidence?