Is Videolaryngoscopy the New Gold Standard for Intubation Following the COVID-19 Crisis?

Share
Download Article Back
Videolaryngoscopy may be the new gold standard for tracheal intubation following the COVID-19 pandemic onset.

Videolaryngoscopes were first proposed to improve airway management through improved glottis visualisation, aiming to reduce incidence of difficult intubation in the operating room. Then, their use was extended to airway management in other settings. These devices contain a miniaturised camera aimed at the tip of the blade to indirectly visualise the glottis.

Videolaryngoscopes differ in design, blade type and technical configuration. Three main categories of videolaryngoscopes exist according to the type of blade. First, the Macintosh blade-shaped optical laryngoscopes have Macintosh blades combined with video technology. The glottis can be seen either directly or via a video screen. Second, the anatomically shaped blades without a tube guide have anatomically shaped, giving a view of the glottis without the need to flex or extend the neck, providing only an indirect view of the glottis, with the need to use a preshaped stylet into the tracheal tube. Third, the anatomically shaped blade with a tube guide do not necessitate a preshaped stylet.

What are the Data in Literature? 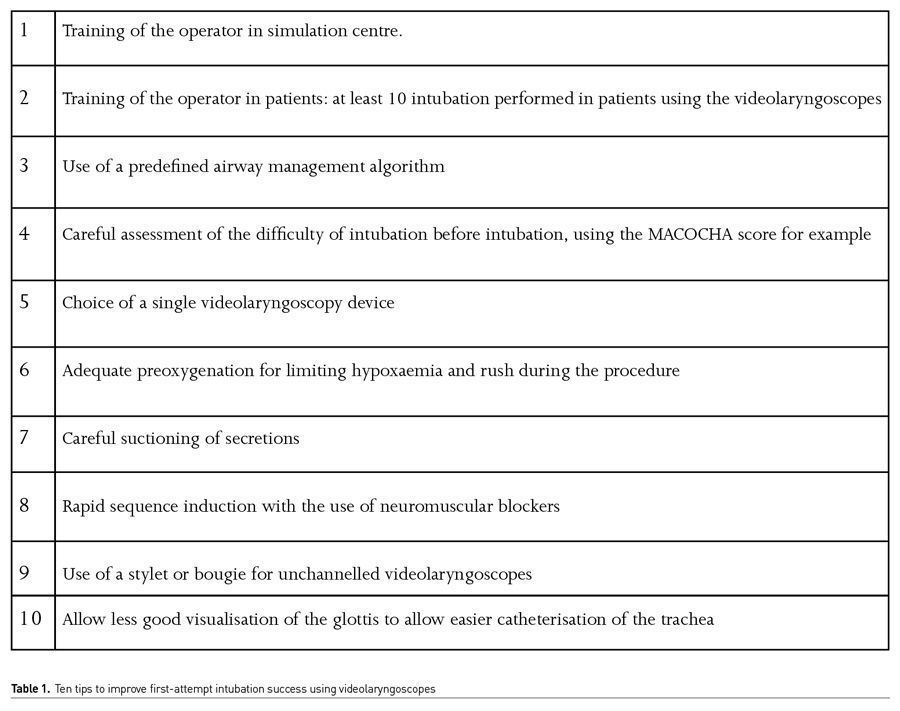 These results were confirmed in 2014 by a systematic review and meta-analysis establishing that use of videolaryngoscopes for intubation in ICU could reduce the rate of difficult intubation (De Jong et al. 2014b). Videolaryngoscopy improved difficult intubation, first-attempt success, Cormack 3/4 grades, oesophageal intubation, and did not modify severe hypoxaemia, severe cardiovascular collapse, and airway injury, when compared with direct laryngoscopy. However, in 2016, Lascarrou et al. (2017) showed in a large multicentre randomised controlled trial that videolaryngoscopy compared with direct laryngoscopy did not improve first-pass orotracheal intubation rates and was associated with higher rates of severe life-threatening complications.

Several meta-analyses (Arulkumaran et al. 2018; Zhao et al. 2017; Huang et al. 2017) were then published, with conflicting results regarding the superiority of the videolaryngoscopes over direct laryngoscopy for intubation in critically ill patients. The disparities between included trials were however considerable, with high heterogeneity.