Share
Download PDF
Accenture’s recent ‘European Hospital Rating Report’ has conducted an in-depth review of the 2011 financial statements from more than 1,500 public and privately owned hospitals hospitals across Germany, Austria, France, Belgium, Italy, Portugal, Norway, and Switzerland. In Spain only private hospitals were included, as sufficient public hospital data was not publicly available.
Findings have shown that in the face of rapidly rising operating costs 33 percent of the institutions are reporting operating losses and generating negative earnings after tax. Nearly half (46 percent) of them are potentially ‘at risk’ of defaulting on financial commitments such as paying vendors for hospital services.
According to the managing director of Accenture’s Health business in France Kiryakos Chebel, a high number of hospitals are burdening their national health system with increased levels of financial strain, an unsustainable practice in the long run. In order to ensure the stability of their institution, these hospitals must manage their finances in the same manner as commercial enterprises.
In France almost half of the establishments are able to meet their financial commitments, whereas a quarter were considered as ‘high risk. This classification was given to 59 percent of Portuguese hospitals and 41 percent of Norwegian hospitals.
Also of importance is an institution’s higher-earnings margin (EBITDA - Earnings before interest, tax, depreciation and amortisation) as this enables investment funding via operating cash flow. This margin stands at an average of 10.7 percent in France, yet almost half of its hospitals still had some risk of default, suggesting they could have insufficient cash flows to cover deficits.
Italy’s hospitals proved highest operating profitability at an EBITDA margin of 12.1 percent, nearly four times better than Switzerland. Despite the fact that 48 percent of Italian hospitals face some degree of financial risk, the ‘high risk’ factor is low at only 16 percent.
Chebel went on to state that the financial management of French hospitals had to be addressed in order to avoid its citizens being faced with drastically different standards of care in the long run, maybe even seeing the closure of  local hospitals. He added there was still time before to the current state would escalate into a crisis, however it was up to the hospitals to establish business models that will ensure a solid financial base for the future. 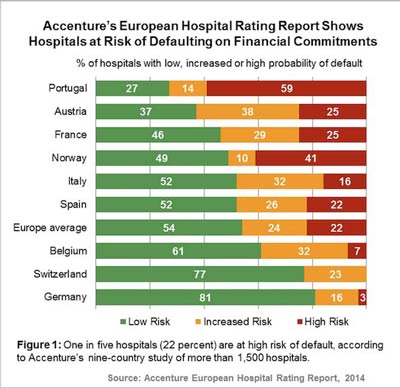 «« New Beckman Coulter Workcell Solution For In Vitro Diagnostic Use

Developing regions, Asia, Africa and Latin America present the biggest opportunities. Due to the growth in the infectious... Read more

International Research on Quality in Healthcare “Spend no more but smarter”

In recognition of her research to understand the organisation and development of the cell   EMBO, an organisation of more... Read more

We are happy to announce that Akram Boutros,MD, the President and CEO... Read more