There is arguably no aspect of social policy more complex or controversial in today’s world than how a country goes about assuring health for its people. Major challenges facing the Indian public healthcare system are the sheer complexity of financing and managing preventive, promotive, curative and rehabilitative care; of proactively addressing the social determinants of health; of assuring quality in the public sector; of harnessing the initiative and resources of the private sector while ensuring effective regulatory systems; and of ensuring equity of access to services across social and economic divides.

Since the Union Budget 2018 announcement on the Ayushman Bharat-National Health Protection Mission (AB-NHPM), valuable viewpoints, evidence and analysis have come up containing a mix of admiration and scepticism. As a result, the NHPM has been labelled many things—visionary, populist, pro-private insurance market, scaled-up version of old schemes, pre-election gimmick and more. The most important question that remains in the minds of health economists is how will publicly funded health insurance cover a population ten times that of Obamacare with less than a hundredth of a budget and still reduce out-of-pocket expenditure of patients.

Current status of health financing including health insurance in India

Public health expenditure in India (total of central and state governments) remained constant at approximately 1.3% of gross domestic product (GDP) between 2008 and 2015 and increased marginally to 1.4% in 2016-17. Including the private sector, total health expenditure as a percentage of GDP is estimated at 3.9%. In 2018-19, the Ministry of Health and Family Welfare received an allocation of Rs. 54,600 crore. The National Health Mission received the highest allocation at Rs.30,130 crore and constituted 55% of the total allocation. According to the National Family Health Survey 4 (2015-16) (Ministry of Health and Family Welfare 2017), only 29% of households in India have one member covered under any health insurance scheme, be it public or private (20% women and 23% men). The top five states according to coverage are Andhra Pradesh (75%), Chhattisgarh (69%), Telangana (66%), Tamil Nadu (64%) and Tripura (58%).

OOPE is typically financed by household revenues (71%). Rural households primarily depended on their 'household income/savings' (68%) and on 'borrowings' (25%) while urban households relied much more on their 'income/saving' (75%) for financing expenditure on hospitalisations and on (18%) borrowings (National Sample Survey Office 2015). OOPE in India is over 60%, which leads to nearly 6 million families getting into poverty due to catastrophic health expenditures.

The Government of India will set up three bodies:

Members: health ministers of all States/UTs.

Composition: headed by full-time CEO at the level of Secretary/Additional Secretary to the Government of India.

Function: to manage the AB-NHPM at the operational level in the form of a Society.

Cost-effective health coverage must cover primary care. This is where the second feature of Ayushman Bharat Programme—the creation of 150,000 health and wellness centres across the country—is very significant. The previous government missed the bus when it failed to implement the recommendations of the High-Level Expert Group (HLEG) on Universal Health Coverage (UHC) (Planning Commission of India 2011). However, those recommendations resonate in the National Health Policy 2017, NITI Aayog’s three-year action agenda (2017-2020) and Union Budget of 2018 when they mention “Assuring availability of free, comprehensive primary health care services” at sub-centre level. Sub-centres are the first line of contact of citizens to the public health system in India. Yet, even with the talk about strengthening health at the grassroots, overall allocation to the Department of Health and Family Welfare rose by a meagre Rs. 1,250 crore from the revised Budget estimate for 2017-2018, and allocations to the National Health Mission have fallen by more than Rs.600 crore. Our biggest constraint is also an acute shortage of human resources.

RSBY was announced by Prime Minister Manmohan Singh in August 2007. The aim of the scheme was to “improve access of below the poverty line (BPL) families to quality medical care for treatment of diseases involving hospitalisation and surgery through an identified network of healthcare providers” (Rashtriya Swasthya Bima Yojana 2009). The scheme provided for annual coverage of up to Rs. 30,000 per household. The policy covered hospitalisation, daycare treatment and related tests, consultations and medicines as well as pre- and post-hospitalisation expenses for some 700 medical and surgical conditions and procedures. During 2016-2017, 3.63 crore families were covered under RSBY in 278 districts of the country, and they could access medical treatment across the network of 8,697 empanelled hospitals. 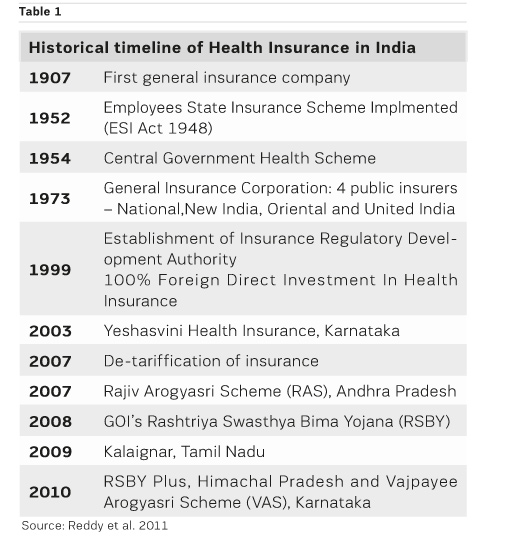 The Situation Analysis document of National Health Policy 2017 mentioned concerns regarding RSBY: “Low awareness among the beneficiaries about the entitlements and on how and when to use the RSBY card. Another concern is related to denial of services by private hospitals for many categories of illnesses and oversupply of some services. Some hospitals, insurance companies and administrators have also resorted to various fraudulent measures, including charging informal payments” (Gupta 2017). Additionally, it notes: “Schemes that are governed and managed by independent bodies have performed better than other schemes that are located in informal cells within existing departments or when managed by insurance companies” (Gupta 2017).

NHPS is different from RSBY in one fundamental way: RSBY was based on enrolment whereas NHPS is an entitlement-based scheme, ie all the identified population sub-groups under NHPS will automatically get covered once the scheme becomes operational. The functions of risk and resource pooling, which is the central role of any insurance company, are almost non-existent in NHPS as the scheme is fully subsidised by the Central and State Government through their budgetary support. The key functions that remain central in NHPS are hospital empanelment and claims settlement.

RSBY provided limited coverage of only Rs. 30,000, usually for secondary care. Though it improved access to healthcare, it did not significantly reduce OOPE as proved in many studies. The NHPS tries to address those concerns by sharply raising the coverage cap, but shares with the RSBY the weakness of not covering outpatient care. which accounts for the largest proportion of OOPE.

“We will give specific QR codes to families entitled to the scheme. QR code or a barcode is a machine-readable optical label that will contain information about the families and their members. These codes will be sent to the beneficiaries’ addresses. Learning from RSBY we decided not to issue cards, for saving time as it took more than one year to distribute cards in RSBY,” said Preeti Sudan, secretary, Ministry of Health and Family Welfare (Sharma 2018).

Challenges in effective implementation of NHPS

As the National Health Policy 2017 concludes: “A policy is only as good as its implementation” (Sundararaman 2017). Selecting the insurance provider is an extremely complex process. Each step, such as the design of the tender documents, contract and legal agreements, payment terms, penalties for non-compliance, pre-qualification of bidders, transparent and secured e-tendering process, which tenders would be called state-wise or nationally—must be considered carefully. Otherwise, the process would invite unnecessary litigation.

I discuss below the advantages and disadvantages of both the models: Trust and insurance.

Key advantages of implementing the scheme through a trust model are:

Risks of this model are: 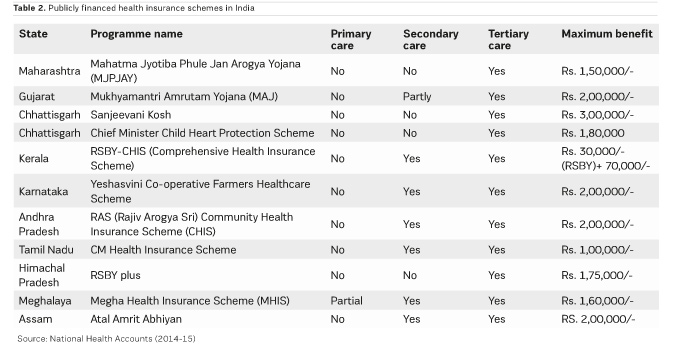 Some of the main advantages of implementing the scheme through an insurance company are:

The risk associated with this model though is in cost-escalation overtime through possible collusion between for-profit entities (insurers, TPAs, and healthcare providers). Maharashtra and Tamil Nadu are currently using the insurance model.

In conclusion, I would like to quote Anil Swarup, Secretary, Ministry of Human Resource Development, “An idea is worth its salt if it is politically acceptable, socially desirable, technologically feasible, financially viable and administratively doable” (Swarup 2017).

In a federal polity with multiple political parties sharing governance, although the Bharatiya Janata Party is currently the ruling party in 21 states, an all-India consensus on the design and implementation of NHPS requires a high level of cooperative federalism, both to make the scheme viable and to ensure portability of coverage across states.

Overall, the effective implementation of AB-NHPM will largely depend on ensuring that the package of services prioritised under NHPS is based on community needs, evidence-based, well governed and inclusive.

As the Government of India has made districts a geographical unit of policymaking through its aspirational districts programme, my recommendations are:

Narayanan N (2018) Interview: ‘Insurance should not be the only financing model for public healthcare in India’. Scroll.in 17 Feb. Available from scroll.in/pulse/869000/interview-insurance-should-not-be-the-only-financing-model-for-public-healthcare-in-india

Paul V, Shukla A, Sundararaman T (2018) Can Ayushman Bharat make for a healthier India? The Hindu 13 Apr. Available from

Personalised Medicine: The road ahead

How can healthcare accelerate the implementation of the science?   Where is Personalised Medicine (PM) already improving... Read more

What role is telehealth playing in improving the genomics playing field?   How one company is breaking down barriers to... Read more

A snapshot of activity in and impact of emerging markets. Read more

Lessons for healthcare from emerging markets

Can the vision of emerging markets transfer to developed countries for better healthcare?   From the mobile banking revolution... Read more