PUSHING THE BOUNDARIES WITH UNCONVENTIONAL TECHNIQUES

Prof. Dr.-Ing. Georg Schmitz gave the State of the Art lecture at the Euroson 2016 conference on the subject of “More than only echoes - unconventional techniques for ultrasound imaging”. HealthManagement.org asked him about his medical engineering research and its potential clinical applications.

What are “unconventional techniques” for ultrasound imaging? Which techniques show promise and for what clinical applications?

Several new methods are in some aspect unconventional. One technique that could change the appearance of ultrasound images fundamentally is based on so-called full-wave reconstruction. This means that the acoustic waves are modeled physically more correctly for the image reconstruction process. For example, we take into account multiple reflections, changes in the speed of sound, and multiple scattering. These effects are neglected in current imaging techniques and therefore artifacts arise in difficult imaging situations. Additionally, first results indicate that these techniques may be able to deliver quantitative data for material parameters like density and compressibility of the tissue, even with today’s standard ultrasound scanners. Currently, these algorithms are computationally too complex to run in real time on standard hardware, but the progress in computational speed as well as in algorithmic development is expected to resolve this issue.

Another unconventional technique is photoacoustic imaging, where absorbed infrared laser illumination generates ultrasound waves that can image light absorption in the tissue. First systems are already available for clinical testing.

In addition, a technique that is close to first clinical tests in research is microbubble tracking using clinically approved contrast agents, where super-resolution techniques similar to optical microscopy are adapted to generate high-resolution images of microvessels.

What techniques have you developed to image microvessels? Will this translate into clinical practice?

For microvessel imaging we use conventional clinically approved microbubble ultrasound contrast agents but unconventional processing techniques: as we can detect and localize single microbubbles even when they pass the smallest capillaries, we can track them. Showing these tracks results in super-resolution vessel images because localisation of single bubbles is possible with about a tenfold higher accuracy than the imaging resolution of the scanner. Additionally, we can measure the velocity of these bubbles and by this capillary bloodflow down to less than 1 mm/s. Currently, this is achieved in small animal studies but we see no reason why this should not be translated to clinical imaging in the next phase of our German Research Foundation (DFG)-funded project.

What is your research into photoacoustic imaging hoping to achieve?

Photoacoustics is unconventional as it generates ultrasound waves by light absorption of the tissue. It shows a different physical property of tissue, which is also dependent on the wavelength that is used. In the EU-funded FULLPHASE project (fullphase-fp7.eu) we use a point-of-care scanner with four different wavelengths in the infrared range. In this consortium clinical partners hope to achieve for example early diagnosis of rheumatoid arthritis by imaging the increased angiogenesis in the inflamed finger joints, which is potentially more sensitive than power Doppler ultrasound. In the long run penetration depth of the method remains a major issue we plan to address in the EU-funded project CVENT . If a clinical system can achieve an imaging depth of up to 3 cm, important diagnostic questions like the differentiation of vulnerable and stable plaques of the carotid can be addressed. 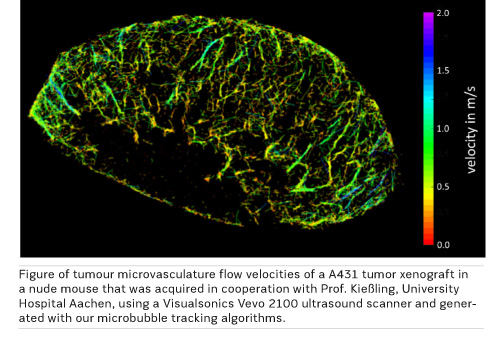 What is your research into tential tumour therapy with ultrasonic targeted imaging aiming to achieve?

Ultrasound targeted imaging quantifies the accumulation of microbubbles that attach to molecular markers within the blood vessels. A typical target is VEGFR-2, a receptor linked to angiogenesis. Microbubbles will accumulate in regions of angiogenesis as in tumors and the response to antiangiogenic therapies can be monitored at a very early stage helping in patient stratification. Our work as engineers is aimed at the correct quantification of the concentration of bound microbubbles as this is not simply proportional to image brightness.

What is the current situation for Canadians living in remote communities who need an ultrasound scan? Are there any mobile services,... Read more

The Importance of Team Work in Healthcare   The challenges of organising healthcare in a public hospital are considerable.... Read more

President, Radiological Society of North America “Show respect for all individuals at all times, no matter what your... Read more

Culture is King: But Only if You Do These Three Things

But Only if You Do These Three Things The phrase “culture is king” is thrown around quite a bit in business circles and... Read more