A new ultrasound device has been developed by scientists at Nanyang Technological University (NT U) that can generate sharper medical images with the use of 3D printed lenses. The precise images can help doctors and surgeons have greater control and precision during noninvasive diagnostic and surgical procedures.

Medical procedures that require the use of ultrasound to kill tumours, loosen blood clots and pass drugs into targeted cells will be a lot more accurate thanks to this new device.

HealthManagement.org spoke to NTU Associate Professor Claus-Dieter Ohl about this new device, its key findings and the advantages it brings to ultrasound treatment.

Please briefly summarise your research and the key findings.

We are working on acoustic devices. The purpose is to develop a better meter of acoustic waves that are used a lot in medical devices either for diagnostics or for therapy.

Diagnostics is commonly associated with medical ultrasound. Therapeutic uses are becoming more and more popular. One very common use is for the destruction of kidney stones called extracorporeal shock wave lithotripsy (ES WL). We are looking to have a device that can put a very narrow focus on acoustic waves. The premise of this is to deposit this acoustic energy on very small spots. Then we also want to have control on the acoustic waves. Both are non-trivial processes. Focusing on small spots means you need very high frequencies and having the control on the wave would need a complex apparatus to shake the waves from electric signals to acoustic signals.

So why have we done this? This device can help with the destruction of unwanted tissue or delivery of drugs. All is done noninvasively because we can sufficiently focus on the acoustic waves.

We came up with a device (Figure 1) using photoacoustic effects, which is a pretty simple phenomenon— whenever you heat something up, it expands. We heat up the surface very quickly and it expands very quickly. It then generates high frequencies. The faster it expands, the higher the frequencies. This is called a photo-acoustic effect, which involves converting the photons into acoustic waves. Using a laser, we hit the surface, the surface absorbs the light, it heats up and then sends the waves—it’s as simple as that. If the wave is very short that means it was implemented for a short duration and the acoustic waves will be there for that short time. 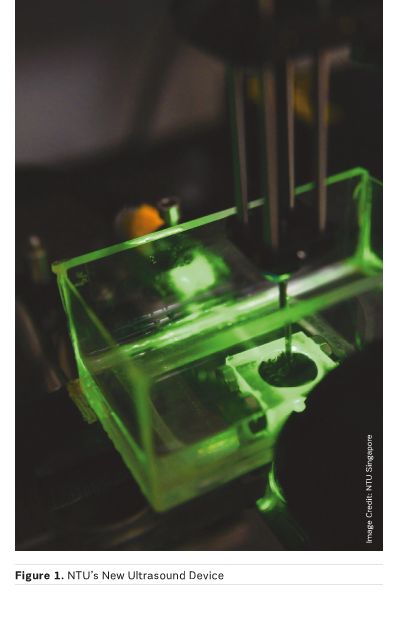 Now, we have two pieces. One is that the surface can be shaped—meaning, the waves that we start with can be shaped accordingly. The other one is that these all work as a very simple protocol, like paint. So we have a surface which we can shape into arbitrary shapes and arbitrary waves and then we have an absorber which is put on this surface and then generates strong enough waves.

What advantages does the 3D printing used in this new device bring to focused ultrasound treatment?

We are not the first to use photo-acoustics for focused ultrasound waves. Although it is recent in research areas, a few groups have already been working on it. We not only want to focus on waves, but also have control of them and then shape the surface. Current research efforts use glass as a substrate. This has very good acoustic properties and you can control the absorber on the surface, but it is very difficult to shape glass. Glass lenses are commonly used as a surface material and the result is a single focus. These lenses only have a single focus and you have no control on it. The idea now is to use three dependent surfaces where you can design the surface with the desired wave form. There are very interesting wave forms that are already being used in medical experiments. I think they were first done on animals. There are also human trials happening where multiple shock waves are used. Not a single shock wave, but multiple shock waves. This technique is called histotripsy. Histo means tissue, and tripsy means destruction or fragmentation and it is a way to destroy benign tumours or maybe even malicious tumours. The idea is to design a device based on photo-acoustics and have the control that would not be possible with a glass surface. It is a pretty simple idea. The tricky part is not the 3D printing part. There must be a surface which is compatible with the plastic used and it has to have sufficient absorption to get strong acoustic waves.

What other benefits does this device bring?

This comment is not as general as it was stated. Now we have a device which can be personalised for the patient. As I mentioned before, we have a surface to adapt to the shape of the eye, specific to a patient. The focus can be set precisely. The device will make a scan of the eye and make a 3D print, much like how dental surgeons use 3D printers for braces. For ultrasound, such treatments are not yet in application. So, the comment is not as bold as it was stated, it is more like a new opportunity in medical devices.

What are the next steps to bring this into development and eventually into clinical use?

The acoustic waves need to have a certain pressure and/or tension that can press but also pull on a tissue to destroy it. This is currently underway and it is looking pretty good. So the aptitude of the pressure waves has to be strong enough and then we have to perform a first trial with tissue phantoms before we go to animals. Our idea is to use it for eye surgery. In this case, we need to have very small incisions, especially if we want to do multiple eye surgeries on a patient. For example, glaucoma and cataracts is becoming common in Asian societies. The glaucoma procedure is mainly done once. If the lenses become opaque afterwards, it is very difficult to make another incision and remove that lens. So Asian society is depending on that first cataract surgery. People may have suffered from impaired vision over ten or fifteen years after the first operation. For glaucoma, the standard procedure is done while inserting small tubes into the eyes to release the pressure. This structure is typically done only once and the channels get blocked. This can be a very drastic operation, which might actually lead to blindness. Here is where we hope to release temporary pressure from the eye by making small holes.

This would be an area where this technology could be used to make very small but controlled holes on surfaces. The advantage here is that we have a surface to adapt to the shape of the eye so that it can be measured first and then printed. The high frequencies and multiple shockwaves can presumably make these very small holes. But this is still work in progress so it is not something that can be used directly just yet.

Why did you decide to offer this course?   A major reason for developing this course was to share health-related activities... Read more

RAD-AID is a non-governmental organisation with a mission to promote radiology in global health with emphasis on sustainability... Read more

The nuances of the English language give “pay” and “cost” many meanings. When a person has no health insurance and no access... Read more

Patient Advocate, Inspire2Live, Amsterdam, the Netherlands If about us, not without us... Read more