By enhancing the ability of cells to absorb chemotherapeutics, ‏an ultrasound technique has nearly doubled the median ‏patient survival time from diagnosis in a phase I clinical trial. ‏During our research at Haukeland University Hospital in ‏Bergen, Norway, we have combined a laboratory ultrasound ‏technique called “sonoporation” with the commercially-available ‏chemotherapy compound Gemcitabine to increase the ‏porosity of pancreatic cells with microbubbles and to help ‏get the drug into cancer cells where it is needed.

The outcomes of a phase I clinical trial involved ten people ‏undergoing treatment for pancreatic cancer. We found the ‏new approach nearly doubled the median survival time from ‏7 months to 18 months without increased chemotherapy ‏dosage and with no added toxicity or additional side effects. ‏When we compared the amount of treatment our patients ‏were able to undergo, compared to a historical cohort, we ‏saw a significant increase of treatment cycles.

Technique Still at its Infancy

We are just at the infancy of this technique and there is a ‏lot of potential to unlock. I only expect the results to get ‏better and better.

In addition, we are working on a lot of improvement to this ‏method developing from every aspect: from the basic physics ‏and mechanics, to microbubble structure, pharmacokinetics, ‏and first in kind in vitro and in vivo experiments, making sure ‏our improvements translate into the clinical trials. ‏Nevertheless, these results are promising for a disease ‏with an often poor prognosis. The one-year survival rate ‏for all stages of pancreatic cancer combined is 20 percent, ‏and the five-year survival rate is 6 percent, according to the ‏American Cancer Society.

The fact that the overall survival can be improved is very ‏important. In terms of the technique, its extremely important ‏that it doesn’t need specialised equipment, as this ‏means that any hospital can start improving patients’ (and ‏their families’) lives, and just as important, is that it can be ‏applied to nearly any other form of cancer as long as the ‏ultrasound can reach it. This opens up a whole new “playbook” ‏for cancer treatment.

This is such a complex interaction that it combines all ‏scientific fields (physics, engineering, chemistry (physical ‏and molecular), pharmacology, cell biology, cancer pathology, ‏and medicine). It’s simply amazing that we reached so far so ‏quickly. It’s like going to a beach and finding that one stone ‏with the perfect combination, its not easy. Once you find it, ‏you can then polish it up and turn it into a piece of jewellery, ‏that’s the stage we are at now.

The concept of delivering payloads via ultrasound, or ‏sonoporation, has been around for decades, and was initially ‏used to enhance gene uptake. I first became involved while ‏working on my doctorate at the University of Hull in the ‏United Kingdom, ultimately delving into interactions between ‏cells and bubbles during short bursts of ultrasound exposure. ‏During that time, a collaboration with a group of French ‏biologists led to the technical development of forcing single ‏microbubbles into a cell with ultrasound — opening the door ‏to forcing any number of other compounds into the cell. As ‏one of the largest barriers to a drug’s efficacy is its ability ‏to permeate a cell membrane, this was a significant development ‏— one that I took with me to a postdoctoral fellowship ‏in Bergen, translating the laboratory concepts to a clinical ‏bedside.

Using Technology and Materials Available on the Market

For our phase I clinical trial, we recruited a cohort of ten ‏volunteers who had locally advanced or metastatic pancreatic ‏adenocarcinoma. To facilitate more rapid clinical translation, ‏our team of researchers and clinicians agreed to use ‏technology and materials already available on the market ‏at every step.

If this worked, in 20 years, we didn’t want a hospital to ‏have to purchase specialised, expensive, one-use equipment. ‏Our equipment consisted of a slightly older clinical diagnostic ‏ultrasound scanner, the GE Logiq 9, combined with ‏a 4C abdominal ultrasound probe. Using a diagnostic ultrasound ‏scanner also allowed us to see and treat the tumour in ‏real time. To generate the microbubbles, we used SonoVue, ‏a sulphur hexafluoride-based solution commonly used to ‏help diagnose liver lesions through ultrasound. Since the bubbles are only stable in the blood stream for a few minutes, ‏we decided to inject a small amount every three and a half ‏minutes. 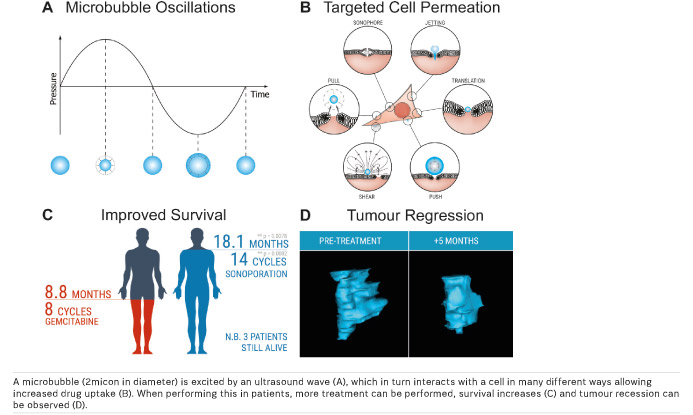 We began the procedure by administering standard chemotherapy ‏to the patients according to the existing protocol. ‏Once the chemotherapeutic concentration in the blood ‏reached its maximum, the ultrasound scanner was used to ‏induce sonoporation for 31.5 minutes, at 3.5 minute intervals. ‏The microbubble’s permeability-enhancing mechanism of ‏action is somewhat opaque, but is believed to be one of ‏two methods.

At high acoustic pressures, microbubbles undergo inertial cavitation — an implosion that creates tiny pores in the cell, allowing a greater concentration of drugs to enter. This effect, which includes shockwaves, may penetrate deeper into the tissue, thus having a deeper effect. Due to potentially violent ripple effects — similar to throwing a cannonball against a wall — this is generally avoided.

At low to moderate acoustic pressures, the bubbles tend to interact with cells, bouncing and rolling against them to push and pull the membrane, occasionally entering the cells — more akin to cracking open a safe by drilling some small, precise holes.

When treated with sonoporation, the volunteers were able to undergo 14 (±6) cycles of treatment, versus 8 (±6) with normal chemotherapy.

This ultimately had the effect of stabilising or decreasing the tumour volumes in 50 percent of the patients and increasing the median patient survival time from approximately 7 months to 18 months.

Future work will include performing a larger-scale phase I/II clinical trial with international collaborators, and working to develop a microbubble compound optimised for targeted drug-delivery at low acoustic intensities. We will also seek to fully understand the mechanisms of sonoporation by using advanced mouse models and bioreactors.

• Results are promising for a disease with an often poor prognosis.

• Using technology and materials already available on the market.

PUSHING THE BOUNDARIES WITH UNCONVENTIONAL TECHNIQUES   Prof. Dr.-Ing. Georg Schmitz gave the State of the Art lecture at... Read more