Sustainability at heart of healthcare complex

A leading Australian health architecture firm has focused on patient experience to focus on sustainability and re-engineer the whole concept of how a hospital works.

One of the world’s most advanced hospitals - $1.71 bln new Royal Adelaide Hospital (RAH) in South Australia – reached technical completion in March and welcomed its first patients in September. Designed by Silver Thomas Hanley in joint venture with Design Inc and constructed by Hansen Yuncken Leighton Contractors as part of a Public Private Partnership model, the 800-bed hospital can care for an estimated 85,000 inpatients and 400,000 outpatients each year. It is part of a multi-billion dollar Adelaide BioMed City health precinct.

The RAH , in the South Australian capital Adelaide, is set to be the epicentre of the state’s health system and is reportedly the third most expensive building in the world. It replaces the old Royal Adelaide Hospital, which was established about 2 km up North Terrace from the new site in 1856.

Silver Thomas Hanley led the design for the new 180,000sq m hospital, 230,000sq m including car parking, following a brief based on a model of care aimed to rejuvenate and disrupt the way health services are delivered in South Australia.

“The Royal Adelaide is intended to be the jewel in the crown of t hat restructured statewide service,” Silver Thomas Hanley Managing Director Ernest Girardi said. “They were very clear in the way they wanted the facility to operate, they were very clear about the model of care and the brief encapsulated a number of strategies, which enables them to deliver services differently, more effectively and in the long-run better for the consumer, the clinicians and the treasury. We re-engineered the whole concept of how a hospital works right down to the bedrooms.”

The 10-level hospital on a sloping 10-hectare site has its main entrance on Level 3. The narrow piece of land was once home to the city’s railyards. The design for the hospital was managed within the height restrictions posed by the flight path for the nearby Adelaide Airport.

The landscaped gardens and courtyards are located within two minutes of all 800 patient rooms, which also feature views of the surrounding parklands and windows that open.

Girardi said the design of the rooms were a good example of how the hospital’s concept had been re-engineered to provide a patient-focused facility.

“If you walk into many current hospital bedrooms they are what I call the motel solution with the ensuite on the left or the right before you walk into the sleeping area – often you can’t see the area where the patient is sleeping because the ensuite is in the way,” he said. “What we did is we provided visibility both ways – from the corridor so the clinicians can look in without any obstruction and the patient can look out. It is a solution that is nothing like any other hospital bedroom in this country or the world for that matter.”

The hospital’s long and narrow shape has allowed it to be laid out vertically rather than laterally, in a series of vertical clinical villages, which are accessed by three strategically located banks of lifts across the spine of the building. 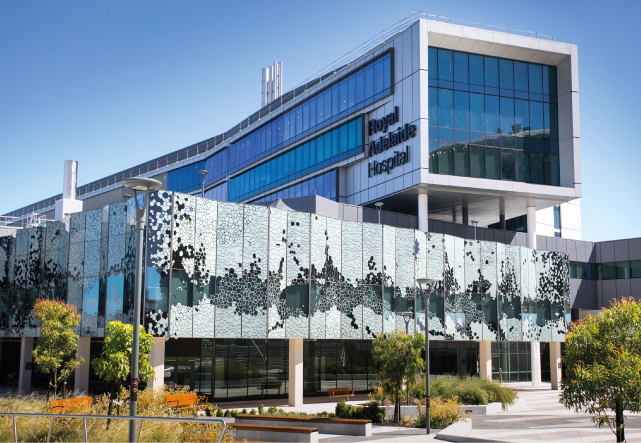 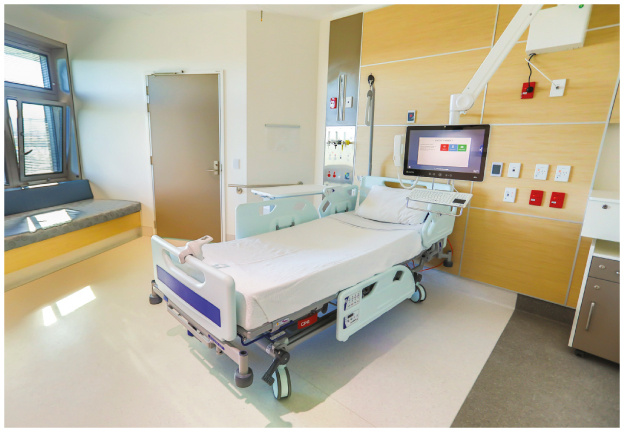 “For instance, all the cancer services are not located on the one floor – you might not think that’s a good idea – we’ve located them on top of each other at the eastern end of the building,” Girardi said. “At the lower level we’ve got the radiotherapy bunkers where people have radiation treatment, on the next level we have the outpatient services for consultations or chemotherapy treatment and on the upper levels we have the overnight accommodation for the oncology patients. So clinical movement is generally up or down over two or three levels rather than lateral east to west along the hospital’s long spine.”

Similarly, at the western end of the hospital, the trauma modalities include the Emergency Department, Intensive Care Unit and operating theatres all stacked below the helipad and connected by a series of “hot lifts”.

The Royal Adelaide’s technology includes a fleet of 25 Automated Guided Vehicles (AG Vs) to transport food, linen, waste and stores around the hospital, advanced telehealth facilities enabling staff to consult with colleagues and patients across the state, wireless technology and equipment with tracking capabilities so it can be located quickly and easily and the biggest pneumatic tube system in an Australian hospital, designed to speed up diagnosis and treatment by rapidly delivering critical supplies like blood samples and medicine.

The long-term objective is for the facility to be paperless with all medical records, orders for pathology and medical imaging to be dealt with through devices and computers.

There is a tablet-style device in each patient room that can be used by consumers to do everything from surf the internet, watch TV and call nurses. The devices can also be used by clinicians to order pathology and look up results.

“It’s a very clever integrated engine that’s been developed by our team, which is designed to provide technological access to all aspects of the facility; everything from booking rooms to ordering meals and calling a patient services ambassador can all be done from a single smart device,” Girardi said. 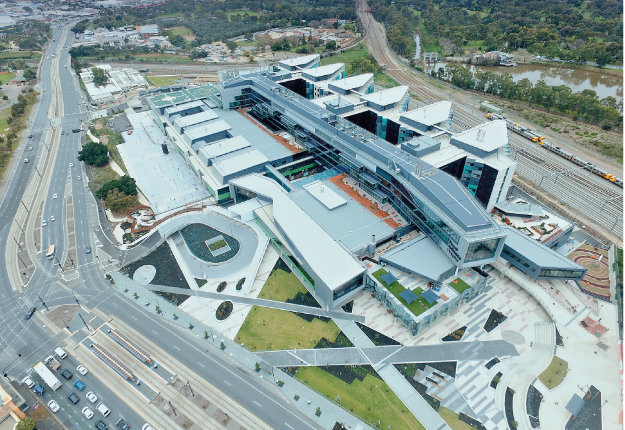 As the centre of the South Australian health system, the hospital is equipped to respond to major disasters and will play a significant role in the state’s post-disaster management strategies.

The Emergency Department at the new hospital has capacity to respond to chemical spills, with decontamination showers for mass decontamination, as well as natural or man-made disasters, such as a plane crash. The new hospital also has capacity to respond to an infectious outbreak with five negative pressure rooms and a quarantine room that can be segregated from the rest of the department. The quarantine room is designed to the standards required to support patients with Ebola.

The hospital has also been built to withstand an earthquake, and has an independent water and electricity supply allowing it to operate in “island mode” for at least 48 hours in the event that these public utilities fail.

“Imagine an event like a smaller earthquake or a terrorist attack where services across the city were disrupted,” Girardi said. “You need to think about what the Royal Adelaide is, it is the primary referral centre for South Australia so it’s not surprising that it has that level of post-disaster function.

This is a world-class facility and I think we will start seeing a lot of people coming to Adelaide specifically to see what we’ve done there.”

The hospital site features 3.8 hectares of green space including 70 internal courtyards, terrace and gardens, three wetland walks and an Australian Aboriginal garden. Passive solar design ensures that the use of natural light is maximised throughout the hospital, particularly in high-traffic areas and patient rooms. This means taking advantage of sunlight to help to minimise the need for artificial heating and cooling and maximise energy efficiency.

The hospital also has a natural ventilation system, with suitably filtered fresh air to meet healthcare and infection control standards and minimise the impact of pollutants generated either internally or externally. On site waste heat generation contributes towards the hospital’s energy requirements, and an extensive energy metering and reporting strategy is in place to identify and manage energy consumption.

The new site also has mechanisms for capturing and storing stormwater run-off, and the facility uses captured and recycled water for toilet flushing and irrigation to minimise the use of mains water.

Girardi said the hospital’s location on the edge of the city’s parklands was also integrated in the design. The hospital was conceived as a hospital in a park. “We took that theme further and integrated green spaces right through the facility,” he said. “I think that one of the key features if you walk through the facility are the courtyards, they are really quite stunning and we were a ble to collaborate with a n umber of local artists to develop sculptures that have been installed into those courtyards and terraces. They are each really quite unique so they serve as a way finding element to help people find their way around the facility.“

Girardi said there was a substantial evidence base that indicates that access to green spaces plays a major role in helping patients recuperate.

“The staff are equally important. When staff are on it can be a pretty harrowing and intense environment to work in so we’ve provided lots of opportunities for them including green space where they can get away from that stressful environment and take the opportunity to gather their thoughts and relax.”

The hospital also has digital kiosks to help people navigate the building.

It is set to become one of the largest health and life sciences clusters in the southern hemisphere.

“We’ve completely changed the character to the point where the size of the workforce, the academics and the consumers that are going to be drawn to that end of town is going to attract a lot more in the way of restaurants and those sorts of amenities into the future,” Girardi said. “We’ve integrated ourselves with The South Australian Health and Medical Research Institute building next door. We’ve got that public amphitheatre that we’ve incorporated into our design that deals with the level difference between the two entry levels. The amphitheatre is intended to be used as an open space day-to-day but that space will also be available for public performances and for the ongoing music and arts programme the hospital has embraced to the point where performances may be able to be broadcast to patients in their beds using the technology that has been incorporated into the facility.”

Andrew Spence is a South Australian journalist with extensive experience in a range of fields including health, architecture, wine, agriculture and technology. After more than a decade working with News Corporation, Spence has spent the past two years as senior writer with The Lead South Australia, which specialises in producing Australian news for a global audience.

Is the “Smart Hospital” a chance for change? Prof. Heinemann explains how futuristic and smart technologies that are used... Read more

Prepare your hospital for the future

NICE guidelines for ultrasound-guided placement of central venous lines in adults and children were first issued in the UK... Read more

healthcare, sustainability, most, expensive, hospital, Adelaide, Australia, construction, design One of the world’s most expensive hospitals on building sustainably.