The main goal of this research was to quantify scatter radiation exposure from mobile x-ray examinations. The simulation consisted of reproducing the technical conditions for the chest anteroposterior (AP) examination in supine and semi-supine positions as well as for the abdomen tangential projection, using a full body anthropomorphic phantom and an x-ray detector. For distances above 1m, the national dose limits for exposed workers is not exceeded (12 mSv/year), but for members of the public it is exceeded (2 mSv/year). Therefore, exposed workers should use a personal dosimeter, employ protective measures and stand behind the mobile equipment. The use of ionising radiation for diagnostic and treatment purposes has increased due to the development of new equipment and easier access to radiologic examinations.

It is also a useful tool to evaluate devices for clinical support, such as catheters, tracheal tubes and other life support systems (American College of Radiology 2011). The radiograms are acquired using ionising radiation and they rely on the differences in the coefficients of attenuation of human tissues. Several effects result from interaction of the radiation with the human body. However, the best known are the photoelectric and Compton effects, the transition between these two phenomena being approximately at 80 kVp in the soft tissues (Lima 2009; Bushong 1999). The interaction of radiation with tissues may produce scattered radiation, which is prejudicial for image quality and contributes to patient and professional/staff exposure (Lima 2009).

Physical interactions of radiation with matter constitute the first stage of a set of phenomena that cause biological changes of two types: the acute or chronic effect and the immediate or late manifestations. To reduce these effects and to ensure the best working conditions for the professionals, diagnostic reference levels were developed to standardise the doses applied by radiographers (Evans et al. 1999; Siemens Medical Solutions 2004).

Since the rooms where mobile x-rays are performed aren’t prepared for radiation exposure, special radiation protection measures have to be considered to protect patients and healthcare professionals. This includes lead aprons and other personal protective equipments (Decree-law 180/2002; Soares et al. 2011). In keeping with the ALARA principle (as low as reasonably achievable), all exposures have to be justified and be as low as possible, respecting the national dose limits established for exposed workers (20 mSv/ year) and members of the public (1 mSv/year) (Decreelaw 222/2008).

During the procedure, radiographers must use personal protective equipment and/or other protective imaging measures that minimise the exposure and absorbed radiation (Soares et al. 2011). In a hospital environment, the radiographer may need to access the ward to acquire x-rays from non-transportable patients. During this procedure, there is a need for some individuals to remain in the room, such as bedridden patients, the radiographer and other staff. The basis of this study and the main concern is the increasing number of examinations required for nontransportable patients in environments where many individuals are present and unprotected as well as to verify whether radiation exposures are within the limits established by national law considering the frequency of this type of examination (Santos 2010; Santos and Maia 2009; Medeiros et al. 2002).

The first stage of this study was conducted through an observational grid where technical parameters were recorded (examination type, mAs, kV, distance between the patient and the x-ray tube and the requesting department) from 194 chest AP mobile x-ray examinations.

Then the simulation consisted of reproducing the conditions of a mobile x-ray examination in three different configurations:

The background dose rate was measured with a maximum intrinsic uncertainty of ± 15% in continuous mode. The mobile x-ray equipment used was a Siemens Mobilett XP Hybrid. Quality control of mobile equipment was performed with an Unfors Xi detector. The table was placed at a height of 0.96m above the room floor, the distance between the x-ray tube and image plate was 1.27m (maximum allowed by the equipment), and the detector was placed at 1m distance from the centre of the region under study. The technical parameters for voltage and current were in accordance with the results obtained in the first stage for every configuration (77kVp and 2.5mAs).

A. Dose rate variation depending on the voltage (between 60-133kV).

B. Dose rate variation depending on the current-time product (between 1.25- 5mAs).

C. Dose rate variation depending on the distance (to study the scattered radiation dose rate depending on the distance, the equipment and the phantom were maintained in their original positions, and the radiation monitor was placed at a fixed height of 0.96m, corresponding to the middle coronal plane of the phantom for configuration 1. As technical conditions 2.5mAs and 77kVp were used, only the distance between the phantom and the detector varied in both configurations. Measures were taken for both configurations at a 90º angle to the median sagittal line of the phantom, between 0.25 m and 1.5 m, with the detector being repositioned in increments of 0.1m. After 1.5m, the detector was repositioned in increments of 0.5m up to 2.5m).

D. Dose rate variation depending on the height (once again, the equipment and the phantom were maintained in their original positions, and the radiation monitor was placed at a fixed distance of 1m from the centre of the region under study. Readings were taken at a 90º angle to the median sagittal line of the phantom, between 0.1m and 1.80m, changing the position of the detector in increments of 0.1m). E. Dose rate variation around the phantom (radiation monitor was placed at 1m from the centre of the exposure field, at a height of 1.25m in the plane of incidence of the radiation beam in configuration 1. The position of the detector was changed in 15o increments; the 0o  angle corresponds to the median sagittal line in the direction of the head).

The hospital department that requires the highest percentage of mobile x-ray examinations (36.7%) is the intensive care unit (ICU). In accordance with the measures mentioned above the following results were obtained:

A. Dose rate variation depending on the voltage

For 60kVp corresponding scattered radiation was 0.258µSv, and for 125kVp it was 0.455µSv for chest AP x-rays in the supine position (Figure 1). The change between 77 and 81kVp may be due to the transition between the Compton effect and photoelectric effect. Voltage and exposure were correlated and linear regression analysis confirmed that the scattered radiation is directly proportional to the voltage (R=0.9994). The values are similar for both configurations (1 and 2) due to the same technical conditions. 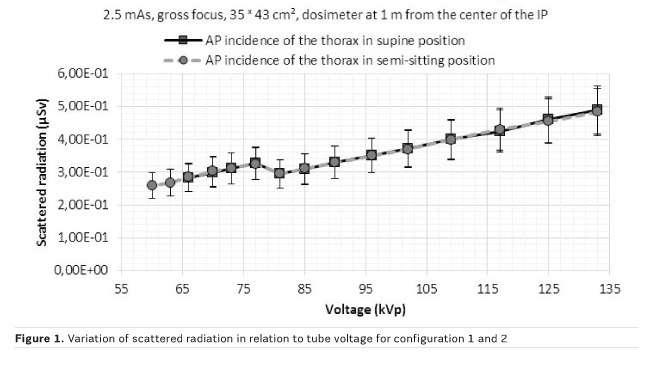 B. Dose rate variation depending on the current-time Product 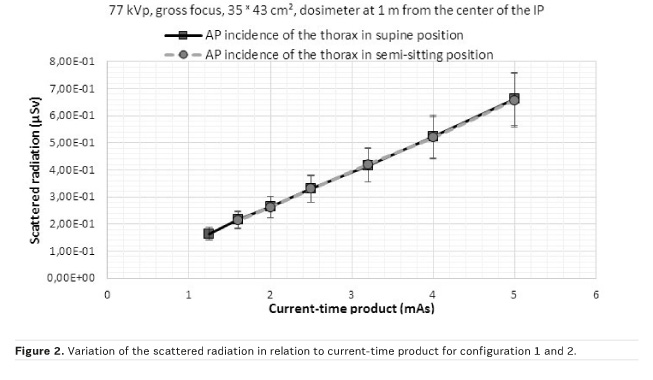 C. Dose rate variation depending on the distance 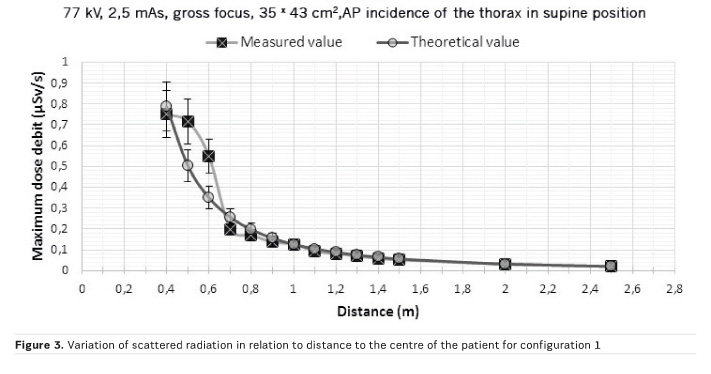 D. Dose rate variation depending on the height 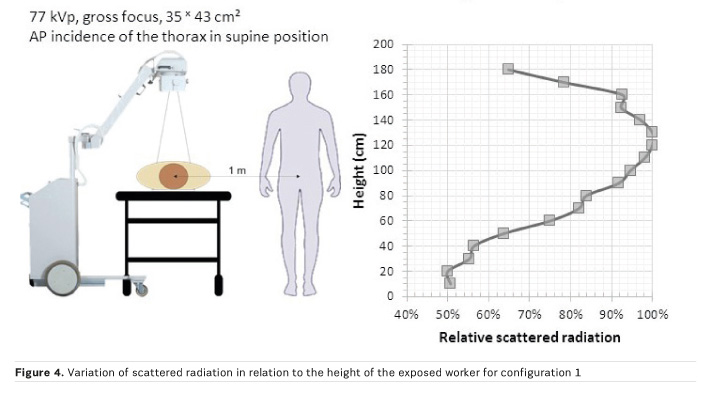 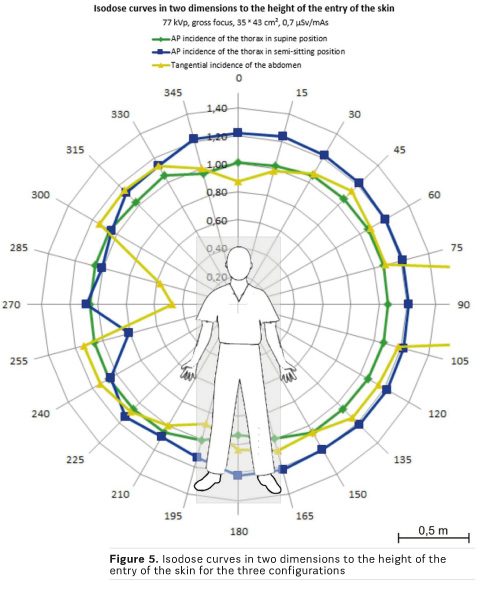 Radiation protection is necessary in order to reduce the levels of radiation exposure in medical imaging activities such as mobile x-ray examinations, which subject patients and healthcare professionals to radiation exposure. Mobile x-rays on patients do not reach dose limits established by the national law and by international standards for protection against radiation (Directive 96/29/Euratom), provided that the individuals stay more than 1m away from the centre of the exposure field and measures of radiological protection are applied.

As the United States moves to value-based healthcare, how should radiology concentrate on delivering better value, both at the... Read more