Radioprotection in Chest CT: An Approach with Bismuth Breast Shield

The main goal of this study was to assess the viability of the bismuth breast shield in chest computed tomography (CT ) examinations. Dose measurements on a phantom (Cardinal Health 76 415) with an ionisation chamber were performed with and without bismuth breast protection in different configurations using the routine chest CT protocol. Image quality control was performed using a phantom (Gammex 464). In all measurements with bismuth protection (no sponges), we observed a dose decrease of 22.6%. Dose decreased by 19.9% with protection (one sponge), 17.6% with protection (two sponges) and 28.2% with the protection coupled to the gantry. It is therefore appropriate to implement the protection configuration coupled to the gantry as a protective measure for patients undergoing chest CT scans.

The indiscriminate use of ionising radiation for diagnosis and therapy purposes has increased significantly due to the fast development and easy access of CT equipment, and, in several cases, to weak justification of these examinations.

Since 1993 the number of CT exams in the United States has tripled to 70 million exams per year. Approximately 29,000 of the US population are at high risk of developing cancer as seen by the CT scans conducted (Berrington de González et al. 2007). In Europe, a survey about European population doses from medical imaging took place in 2015 (European Commission 2015). The participating 36 countries reported the average frequencies per 1000 of the population, for the top 20 groups, compared with similar data from the 10 European countries in the Dose Datamed 1 project and United Nations Scientific Committee on the Effects of Atomic Radiation (UNS CEAR ) Health Care Level 1 (HCL1) countries.

In all CT groups, average frequencies have significantly increased, and in some cases have more than doubled (for CT trunk, the increase was approximately threefold). These CT examinations represent a total of 55% of relative contributions of the four main groups (plain radiography, fluoroscopy, CT and interventional radiology) to overall collective effective dose.

A CT scan subjects the human body to between 150 and 1,100 times the radiation of a general x-ray, or around a year's worth of exposure to radiation from both natural and artificial sources in the environment (Storrs 2013). Therefore, there is a need to create measures and procedures to protect the patient from the biological effects of ionising radiation, which varies according to the cells’ radiosensitivity and the absorbed radiation dose. At the same time, it should be noted that the tissue weighting factor (WT) value has changed in the publications of the International Commission on Radiological Protection (ICRP ) from 0.05 to 0.12 (Wrixon 2008). 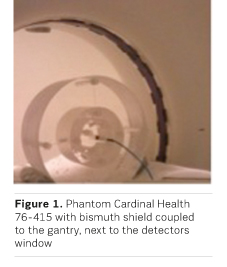 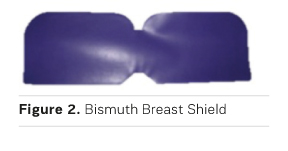 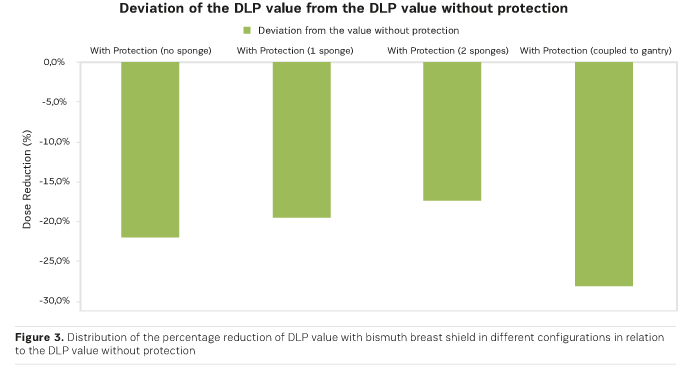 Given the above, the aim of this study was to determine the percentage of dose reduction obtained by the phantom using a bismuth breast shield in different configurations. It was also to assess their viability in chest CT examinations through the evaluation of image quality, taking into consideration a broad range of scanner parameters (HU value or CT number accuracy; low and high contrast resolution, noise and artifacts).

135 measurements were made using a 16-slice CT scanner with and without bismuth breast shields in different configurations (Figures 1 and 2):

Dose measurements were performed on a phantom (Cardinal Health 76-415) with an ionisation chamber, taking into consideration the configurations indicated above using the routine chest CT protocol (130 kVp, 70 mAs; collimation of 4x1.2mm, rotation time of 0.6 sec. and Pitch=1). This phantom is 32cm in diameter and 15cm in length. The placement of the bismuth breast shield was only made after acquisition of the topogram, due to the automatic exposure control (AEC).

To determine and evaluate the dose, CTDIw, CTDIvol and DLP values were calculated:        DLP=CTDI Vol×L:

Image quality control tests were performed using the phantom (Gammex 464) for the same configurations, using the chest and abdomen routine protocol. This phantom consists of solid water (0 ± 5HU) with a length of 16cm and diameter of 20cm, and is divided into four modules (Supertech 2013):

In this study, we evaluated the dose rates for the routine chest protocol by taking into consideration the dose received by the phantom with and without the bismuth breast shield in the different configurations. The values of CTDI Vol, DLP are presented in Table 1.

It was found that the percentage of dose reduction was higher when sponges were not used, compared to when they were used. When coupled to the gantry, the bismuth shield reduced the dose in the phantom by 28.2 %. 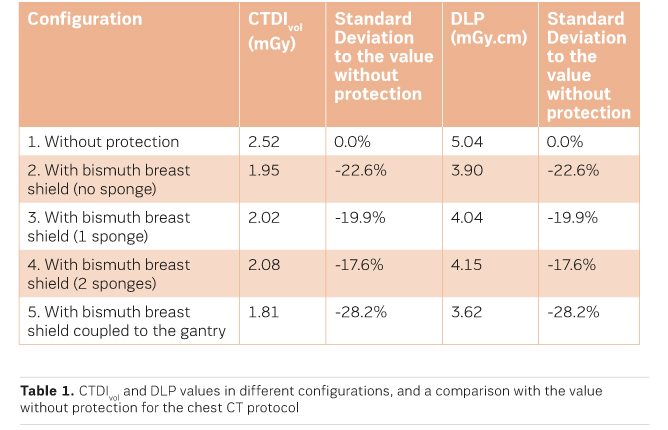 The evaluation of image quality control in this study was performed by comparing the images obtained with the phantom when no protection was used with when the bismuth shield was used in the different configurations.

In module 3 (Figure 6), it was observed that without protection on the phantom, all the ROI s (12H, 9H, 6H, 3H and centre) were within the tolerance range. When the bismuth shield was placed on the phantom without and with a sponge, there was no uniformity of the periphery ROI s in relation to the central one. With the bismuth shield coupled to the gantry, it was found that periphery ROI values were within the tolerance range, except the central ROI .

In module 4, for both protocols, it was possible to identify 7 pl/mm in all configurations using a B41s kernel (soft tissue) and 9 pl/mm for a B50s kernel (lung parenchyma).

Overall results indicate that the dose values obtained with one sponge and two sponges did not reduce the dose as expected, which was influenced in some way by the interaction of radiation with the bismuth shield. The backscattering effect is what best explains this phenomenon, in which the photons when exiting the x-ray tube interact with a surface and produce secondary/scattered radiation. This, when produced in all directions, can be limited by the use of protection. Due to the presence of the sponges, a propagation medium was created, resulting in an absorption of some radiation dispersed by the phantom, and leading to a dose reduction of only 19.9% and 17.6%.

Another possible reason comes from the fact that in these two configurations, the 360º x-ray tube rotation, when emitting the primary beam in the posterior region of the phantom, allowed the secondary radiation released in the anterior region to collide with the bismuth protection and resume being absorbed by the phantom. Once the protection was placed near the detector window, the above-mentioned effects were found to be lessened, contributing to a greater percentage reduction of 28.2% of the dose.

In this study, the reliability of the bismuth protection in the different configurations was verified, percentage of dose reduction was determined, diagnostic image quality was checked and the influence of bismuth breast shield coupled to the gantry in the normal functioning of CT scans was tested.

The configuration with protection coupled to the gantry was the most acceptable in this study, proving that the low contrast resolution, noise and the spatial resolution were in agreement, without negatively affecting the image quality. It was also found that streak artifacts were lessened in this configuration. In conclusion, and having obtained acceptable results in image quality with a decrease in radiation dose in the phantom, it would be pertinent to implement this protective measure in CT examinations as a routine procedure, especially considering that it allows a reduction in breast irradiation.

There is a pressing need for intelligent leaders who are able to deal effectively with today’s challenges and demands—and... Read more

Confident Voices in Health Care Boston, USA Medical improv is an exciting teaching tool that can be used to promote... Read more

The nuances of the English language give “pay” and “cost” many meanings. When a person has no health insurance and no access... Read more

AIRIS Vento Plus:  reliable hardware ,  patient centered  and  cost effective . The newly launched  AIRIS Vento Plus Open MRI  offers you an affordable system with a patient centric design. If you are looking for strong imaging quality combined...