Radiology in Iran – Coming Out of Sanctions

The Iranian Society of Radiology (ISR ) is the largest in the ‏Middle East and Levant region, with the only other country ‏with more radiologists in this area being Turkey. Presently, ‏there are about 2,400 radiologists practicing in Iran – the ‏Iranian society was founded in 1966 and is now one the ‏largest and best organised medical associations in the ‏country.

The main area of preference in the practice of radiology ‏is still “general radiology” but there is a growing demand ‏and interest for sub-specialty imaging services. Solo radiology ‏practice is the predominant form of establishing and ‏running radiology centres in the country, but group practices ‏with about five to ten radiologists is a growing trend, ‏thus allowing for the provision of subspecialty services to be ‏tailored to national needs.

Annual congresses of radiology and refresher courses play ‏a major role in post-graduate training, which is a significant ‏ongoing demand, considering the rapid developments taking ‏place internationally in the field of radiology. This makes Iran’s ‏annual congress of radiology, which is the largest in the region ‏and held every May, a bridge that connects the Iranian radiological ‏community with modern medical imaging worldwide.

Although sanctions against Iran have had a devastating effect ‏on medical imaging, currently the situation is changing and ‏the radiology community is hopeful that it will face better ‏conditions ahead. As Iran is a great regional market for ‏vendors, when the removal of sanctions relieve this action, ‏major companies will get access to the largest potential ‏market for radiological equipment in the whole region.

We could say that one of the “positive impacts” that the ‏sanctions had on the Iranian radiology sector was the introduction ‏of picture archive communication systems (PA CS) in ‏medical imaging technology, as well as the practice of filmless ‏or ‘less film’ radiology. Because of the limited availability ‏of films, PA CS installation and CD/DVD image distribution ‏was adopted very rapidly during the sanction period. ‏Of course, the market leaders of PACS and imaging informatics ‏solutions are mostly local vendors and the market ‏is still very much promising for reasonable internationally ‏approved products in this field.

Teleradiology is becoming more and more popular in Iran ‏and a growing number of radiologists and clinicians view ‏the medical images retrieved remotely as an ideal solution, ‏despite the lack of nationally-approved rules and regulations ‏for teleradiology practice in the country.

Hybrid imaging is a missing sector altogether in the Iranian ‏radiology arena. There are only a handful of PET /CT installations ‏in the country which is clearly far less than what we ‏actually need. The biggest obstacle in the availability of hybrid ‏imaging equipment has been the sanctions that have been ‏imposed on Iran that prevented the free import of machines ‏and equipment into the country.

The Iranian radiological community has a very good relationship ‏with the regional and international communities. ‏There are a number of ongoing agreements and protocols ‏of cooperation between the Iranian Society of Radiology and ‏all neighbouring countries including Turkey, Iraq, Pakistan ‏and Afghanistan. Also, Iran is playing a leading role in the ‏establishment of a regional radiological community under the ‏banner of the Eurasian Radiology Initiative. Iran is a founding ‏and key driver in this exciting project that aims to cover ‏regional collaboration between 34 countries. Iran will host ‏the first Eurasian Congress of Radiology at Kish Island later ‏this year.

End of Sanctions. What Next?

The imposition of sanctions on Iran has made any scientific ‏collaboration with international radiological communities ‏extremely difficult. Inviting and including guest scientists at ‏meetings or events hosted by departments of radiology were ‏hampered by political issues. Also, the participation of Iranian ‏scientists in international radiology events has been limited ‏due to the restricting barriers in securing a visa. Hopefully, ‏after the removal of the sanctions, the scientific collaboration ‏with the international community will be restored and ‏will even expand. All international speakers who visited the ‏country during the past decade have expressed their surprise ‏that, “Iran is much better than what we see in the media!”

• Iran has 2,400 practicing radiologists, the second largest community in the Middle East.

• Around 150 radiologists graduate each year.

• Playing a leading role in the establishment of the regional Eurasian Radiology Initiative.

• Sanctions have prevented the free import of machines and equipment. 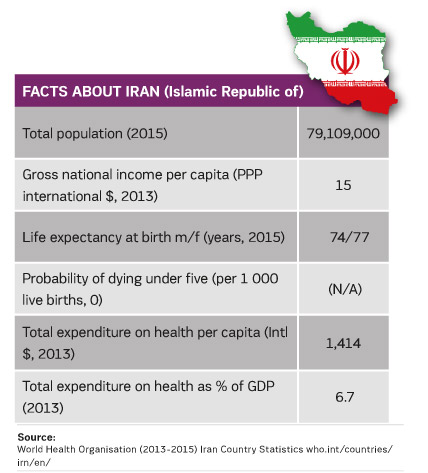 Why should radiologists engage in Twitter?   As the term "social media network" implies, using Twitter is about... Read more

Radiology At the Crossroads

Radiology is now at a crossroads. Let us expand the ‏metaphor. If we are to proceed we are to be mindful of ‏the traffic... Read more