Apps for Cardiovascular Disease: The Role of Avatars In Personalisation

So why don’t people go to cardiac rehabilitation? Cardiac rehabilitation is typically time-limited, conducted in groups and requires people to visit a hospital or community centre (Clark et al. 2013). Distance to the facility, dislike of participating in groups, and the timing of the programmes, which are frequently conducted during working hours, may deter people from attending (Clark et al. 2013).

The explosion of digital technologies gives hope that mobile applications (apps) might be able to deliver cardiac rehabilitation at a time, place and in a mode more convenient to individuals (Neubeck et al. 2015). Studies of programs which deliver services remotely show some promise (Albarran et al. 2007). For example, the TEXT ME study, that used automatically generated text messages to give cardiovascular health advice, was successful at improving multiple cardiovascular risk factors in the 352 patients who received them (Chow et al. 2015).

Personalisation appears to be a critical element of the success of apps in this field. When researchers from the TEXT ME study interviewed participants, they found that the participants imagined that the friendly research assistant who had recruited them was personally sending individual text messages (Redfern et al. 2016). It seems that the more apps can be personalised, the more relevant and meaningful they become to us (Neubeck et al. 2015).

Digital avatars are theorised as a way to increase the sense of personalisation. The word ‘avatar’ comes from a Sanskrit word meaning descent. In Hinduism, an avatar was the manifestation of a god on earth. In digital terms, an avatar is the graphical representation of the user in a digital environment. Avatars can be anything from simple two-dimensional icons to complex three-dimensional images. Avatars are frequently, and successfully, used in gaming (McGonigal 2011).

Gaming apps make up a large proportion of time spent online. At least 70 percent of people in the UK have a gaming app on their phone, and women of all ages now game more than men (Neubeck et al. 2015).

This is particularly important, because women are less likely to go to cardiac rehabilitation, but may use an app more readily. Apps make games less threatening, and gamification has been successfully used to improve health (Neubeck et al. 2015).

For a short time in 2016, headlines were filled with stories of Pokémon Go—the good, the bad, and the ugly. On the one hand, people were reported to increase their physical activity exponentially, with success stories of weight loss, increased fitness, increased interest and engagement with other players (Clark and Clark 2016). On the other hand, traffic was stopped as players swarmed the streets in search of an elusive Pokémon, people risked their lives on train tracks, and parents were cautioned about the safety of their children (Clark and Clark 2016).

At this stage, the research hasn’t been completed to show whether the use of avatars or gaming will be able to augment traditional cardiac rehabilitation services. However, lessons learned from other apps help to highlight some important considerations. Researchers are now testing different models of avatars to prevent and manage chronic disease. Keele University in the UK launched an app called ‘Manage Your Health’ in January 2016 (https://iii.hm/7q4). The aims are to offer support to people with asthma, COPD, diabetes, and back pain. This app uses an avatar of a health professional to demonstrate key points, like how to use an inhaler correctly. If successful, this could reduce time spent on demonstrating techniques, while offering the opportunity for users to regularly remind themselves of key points.

Another avatar that was launched this year is the MyHeartMate app (Figure 1) (Neubeck et al. 2016). It was designed as a game, where the actions taken in the real world improve the heart avatar in the game. Players look after their heart avatar and their own heart health by undertaking good health behaviours. Points are earned through health quests and fun games and then spent on their heart through exercise, managing stress, eating a healthy diet and taking medications. If you are not looking after your real heart, your virtual heart looks increasingly unwell. Manage Your Health and MyHeartMate have been developed in English, and although one stated benefit is that apps are readily translated into other languages, these apps have not yet tested that. 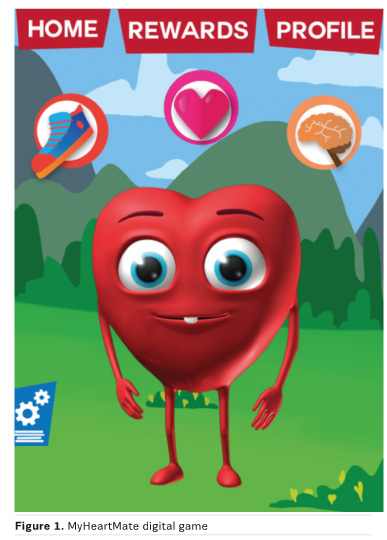 Cultural relevance is extremely important. It is easy to dismiss information if the people who give it are perceived as ‘not like me’. Avatars have the advantage of being tailored to be culturally relevant. Researchers in Stirling recently developed an animation using avatars to encourage young people with asthma to be more physically active (Murray et al. 2016). Avatars varied in relation to gender and skin colour so that users could select the avatar that appealed to them most. Young people were also involved from the beginning in designing the intervention, something the authors conclude was essential to making the final intervention acceptable to those it was designed for. In the digital age language can be quickly translated, but literal translation can bring about some startling results. It is imperative that when apps are developed for diverse cultural backgrounds, people of the relevant culture are involved throughout to avoid translations that are in the best case laughable, or in the worst case inappropriate or offensive.

One app for people with heart disease that hopes to address this is the Flinders University ‘Cora’ app (Figure 2). Cora is the avatar of a healthcare professional that advises people on how to manage their chest pain. She has been developed to be as universally appealing as possible. Extensive research went into the look and content of the avatar, and eventually the researchers will be able to let users customise the avatar even further (Clark et al. 2014). Patients provided feedback on the look and feel of the app and reported a high level of satisfaction. Importantly, the patients also felt they had gained a better understanding of how to recognise and respond to symptoms of a heart attack. Now the researchers are testing their findings in a large randomised controlled trial: “A Simple avatarbased Application for improving heart attack education: SAVE” (https://iii.hm/7q6). 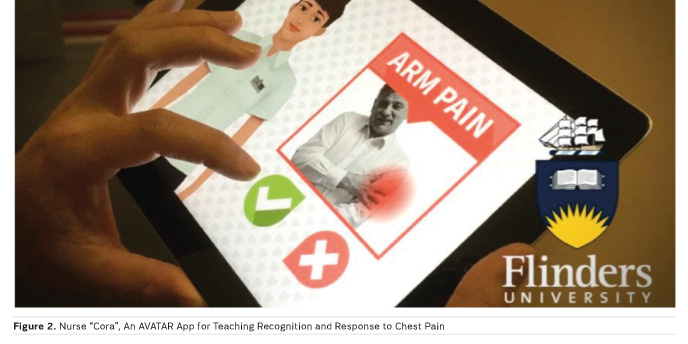 Another study addressing patients’ response to heart symptoms has used animated characters and a ‘storytelling’ approach to illustrate different scenarios and experiences (Farquharson et al. 2016). This intervention has systematically included behaviour-change techniques (Michie et al. 2013), highlighting the potential to incorporate existing theories and evidence about what changes behaviour into the new digital modalities. This will hopefully increase effectiveness. 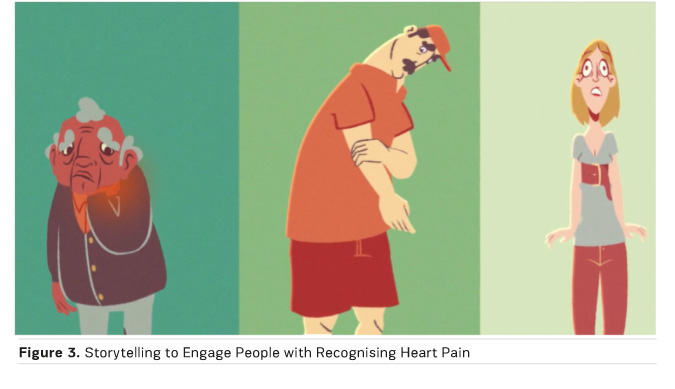 The role of avatars in apps is hypothesised to be important from the point of view of personalisation and engagement. Although extensive work is going on in this area, it is too soon to say if this will generate better healthcare outcomes for patients. Although something as simple as text messaging has been successful in achieving improved cardiovascular risk factors, it is critical to understand that a person-centred element is likely to be important in ongoing success and is critical in delivering healthcare interventions. It is possible that avatars could convey a sense of that person-centred support. The results of future studies are eagerly awaited.

Abarran JW et al. (2007) 'It was not chest pain really, I can't explain it!’ An exploratory study on the nature of symptoms experienced by women during their myocardial infarction. J Clin Nurs, 16(7): 1292-301.

Clark AM and Clark MT (2016) Pokémon Go and Research Qualitative, Mixed Methods Research, and the Supercomplexity of Interventions. SAGE Publications.

McGonigal J (2011) Reality is broken: Why games make us better and how they can change the world. New York: The Penguin Press.

Meet pioneering gynaecardiologist Angela Maas, who explains why there's still a lot to do when it comes to cardiovascular disease... Read more

The Recertification Process of a Chest Pain Unit (CPU)

With chest pain a leading reason for an emergency room visit, what is new in training and recertification processes for chest... Read more

Is value in cardiology well understood?   When we consider value we are focused on improving quality and lowering costs.... Read more