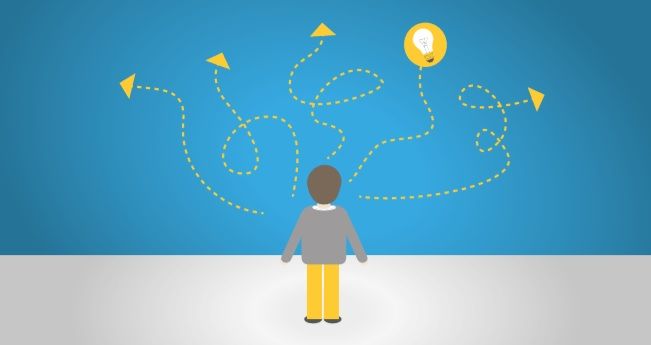 "We shape our tools, and thereafter our tools shape us” (McLuhan)
Wasteful, unhelpful imaging helps nobody, and may be associated with patient harms through unneeded and unwanted intervention. Appropriate imaging through referral guidance is advocated through the Bonn Call-for-Action (International Atomic Energy Authority and World Health Organization 2013), with supporting tools such as clinical decision support (CDS). Improving practice through delivery of evidence-based guidance in workflow is laudable, but there are difficulties. Evolution of CDS should address pitfalls of inadequate coverage of clinical scenarios, conflict of guidance, susceptibility to gaming and the need for user friendliness of the technology. Metrics for monitoring are important to improve use, and shape a better tool for clinicians and patients.
Awareness appropriate and audit – the principle first advocated by the International Atomic Energy Agency (IAEA) has gathered momentum, with adoption by many organisations and professional societies. This was the thrust of the first point of the Bonn Call-for-Action (International Atomic Energy Authority and World Health Organization 2013), which reiterates the need for evidence based imaging referral guidelines and tools for implementation, including clinical decision support (CDS). Furthermore, the need for such guidance has gone beyond the traditional clinical scenario of consultation between referring doctor and patient to patients’ self-presentation for individual health assessment. With complex, new imaging procedures, now more than ever we need to offer guidance aligned with best clinical practice to ensure patients get the best test first and to avoid wasteful, unhelpful imaging, which may lead to increased risk or even patient harms. For example, in patients with low clinical probability for pulmonary embolism, the false-positive reports in 25-42%  of CT pulmonary angiograms may lead to unnecessary anticoagulation (Ranji 2006; Hutchinson 2015).

The application of a computerised system to aid medical decisions needs to be balanced against the intricacies of an individual patient, his/her condition and co-morbidities. There are several examples where CDS is advantageous. In prescribing, the cost of non-generic drugs can be mitigated through suggestions for change to generic where such an alternative is possible and desirable. What differs in imaging is the need for justification of an imaging procedure at the individual level (International Commission on Radiological Protection 1996). It is essential to take into account the sensitivity of the patient, eg during pregnancy; incompatibilities, eg non-MRI compatible pacemakers; and coexisting conditions such as renal failure. Whereas there will be some choices which are clearly improved with decision support, eg ultrasound rather than CT for paediatric abdominal pain, there will be other decisions which are more complicated, such as the investigation of the pregnant woman for suspected pulmonary embolism where perfusion lung scintigraphy is the best choice.
Guidance is mainly for clinicians in primary care and emergency care, where presentations are diverse and not always familiar to the referrer. The challenges are to provide guidance where guidance is needed, available and applicable to the patient. In years gone by such guidance may have been through the guiding hand of an experienced colleague, a professional society or the health authority. The disadvantage of such advice is that, although valuable, this did not always reach the patient and his/her doctor in time to influence the decision to investigate or which investigation to undertake. Furthermore the advice may not have been uniformly available. A third concern was that advice from different sources may be discordant, leading the referrer to disregard any guidance given now or in the future.
The challenge with CDS is to provide timely and relevant advice with uniformity across a district, country or region. Such advice should guide both the immediate decision and referral behaviours. Systematic review of primary research identified four essential features, which will promote success in any CDS system (see Table 1 (Kawamoto et al. 2005). 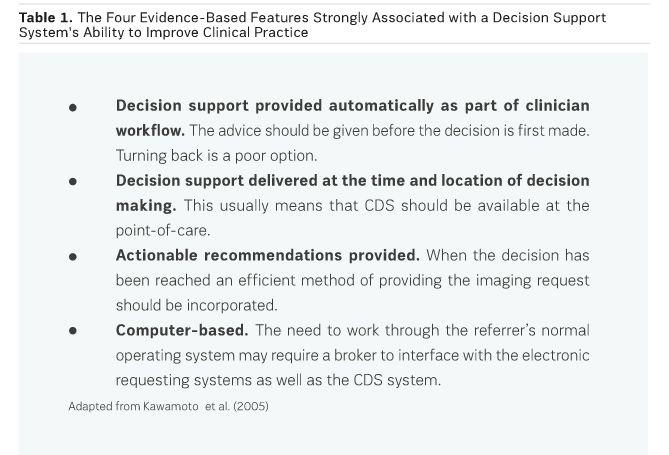 In radiology there are only a limited number of working CDS systems. Perhaps the one with more experience is from the joint venture between the American College of Radiology and the National Decision Support Company, ACR Select (acrselect.org/contact.html), which has been in use for a few years in North America. Use of such a CDS system has been mandated in the USA for implementation in the next two years (United States government Printing Office 2014). In Europe, the European Society of Radiology (ESR) is working with the ACR and National Decision Support Company on a project, the ESR iGuide, which has been piloted in Barcelona. The evidence to support the value of CDS is in part due to the reduction in growth in requests, which for CT is estimated at ten percent per annum (NHS England 2014). Although numbers are not actually reduced the rate of growth is reduced, possibly to lie in line with technological advance and appropriate indications (Sistrom et al. 2009).
Perhaps the overriding evidence in favour of CDS is conferment of a higher level of appropriateness of the imaging modality for the clinical scenario. If there is a real saving to be made this may be through avoiding inappropriate investigations along the way. A further advantage is the availability of auditable data, which may be fed back to clinicians to influence referral behaviour, leading to shared responsibility for a radiation safety culture. As systems grow more sophisticated the opportunity arises for machine learning to identify clinicians’ normal working practice and predict scenarios as well as mining of big data to identify useful information such as previous investigations and renal function assessment, tasks that referrers may otherwise need to do manually.
Formal assessment of national CDS implementation is limited. The Medicare Imaging Demonstration (MID) Final Evaluation report to the United States (U.S.) Congress was published by the Rand Corporation in 2014 (Timbie et al. 2014). This evaluated advanced diagnostic imaging orders, which were entered into and rated by a DSS for appropriateness. Findings are summarised in Table 2. Following amendment of the Protecting Access to Medicare Act in April 2014, ordering professionals in the U.S. would have to consult a qualifying decision support mechanism equipped with appropriate use criteria, starting in 2017 (United States government Printing Office 2014). 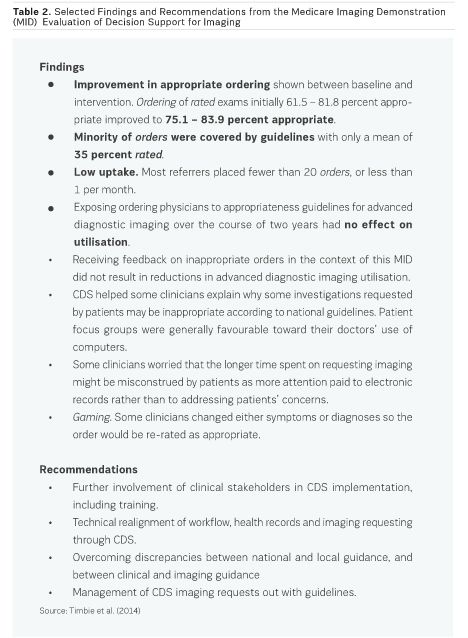 In making a choice as to where to go with CDS, local working practices and regulations should be taken into account together with clinician and patient preferences.
Four phases are recognised in the development of CDS systems. The first is standalone; the second supports integration with other medical systems; the third is standards-based; and the fourth is service model-based with intelligent function across systems.
In practice, there are three basic methods of providing decision support. The simplest is to make guidance available passively either through print copy, posters or hyperlinks. This has been used for many years and is of limited efficacy. The second model is to provide active guidance through a rule-based system, which may either be a standalone CDS system or an ‘add-on’ CDS to electronic requesting systems, such as ACR Select. The third model (currently only used for some clinical practice guidelines) is for intelligent guidance to be provided only when such guidance is available, nudging the healthcare professional along best practice, preferably through an electronic health record. In Europe, referral guidance is viewed by legislators and regulators as a professional matter and guidelines should be advisory, not mandatory. Furthermore, there may be 10-20 percent of cases in which decisions for the preferred modality fall outside guidance, usually due to good reasons, eg pregnancy or pacemaker (Remedios et al. 2014; Almén et al. 2009). Any system must allow for this level of compliance in auditable standards. Metrics should preferably consider surrogates of outcome rather than just organisation and process.

Evidence-based referral guidelines remain necessary behind any CDS system. To succeed, such imaging referral guidance should be concordant with clinical practice guidance. Awareness and education of clinicians and the public remain challenges, which could be addressed in part by campaigns such as Choosing Wisely, which receive support by patient advocates as well as clinician groups and departments of health (Academy of Medical Royal Colleges  2015). The area which may need more attention is monitoring through clinical audit for better use of referral guidance and to help reshape guidance to support the needs of both clinician and patient.

MEETING THE CHALLENGES Implementation Considerations Before planning implementation of dose monitoring software you should... Read more

The care continuum is well upon us and has become a rapidly evolving concept as the medical profession tries to move forward while... Read more