Share
Download PDF
A diet that's low in carbohydrates and high in protein is what many people take in order to lose weight. But low carbohydrate diets have been found to be unsafe and could lead to premature deaths, according to a large study presented at ESC Congress 2018 held in Munich. The findings suggest that low carbohydrate diets should not be recommended.
"We found that people who consumed a low carbohydrate diet were at greater risk of premature death," said study author Professor Maciej Banach, of the Medical University of Lodz, Poland. "Risks were also increased for individual causes of death including coronary heart disease, stroke, and cancer. These diets should be avoided."
Obesity is known to be a major risk factor for several chronic conditions, including cardiovascular disease, hypertension, type 2 diabetes, and cancer. Different diets have been suggested for weight loss, such as diets low in carbohydrates and high in protein and fat. The long-term safety of these diets is controversial, with previous studies reporting conflicting results of their influence on the risk of cardiovascular disease, cancer, and death.
In this new prospective study, Prof. Banach and colleagues examined the relationship between low carbohydrate diets, all-cause death, and deaths from coronary heart disease, cerebrovascular disease (including stroke), and cancer in a nationally representative sample of 24,825 participants of the U.S. National Health and Nutrition Examination Survey (NHANES) during 1999 to 2010. Compared to participants with the highest carbohydrate consumption, those with the lowest intake had a 32% higher risk of all-cause death over an average 6.4-year follow-up. In addition, risks of death from coronary heart disease, cerebrovascular disease, and cancer were increased by 51%, 50%, and 35%, respectively.
The results were confirmed in a meta-analysis of seven prospective cohort studies with 447,506 participants and an average follow-up 15.6 years, which found 15%, 13%, and 8% increased risks in total, cardiovascular, and cancer mortality with low (compared to high) carbohydrate diets (see figure for total mortality).
"Low carbohydrate diets might be useful in the short term to lose weight, lower blood pressure, and improve blood glucose control," Prof. Banach said, "but our study suggests that in the long-term they are linked with an increased risk of death from any cause, and deaths due to cardiovascular disease, cerebrovascular disease, and cancer."
Participants in the NHANES study had an average age of 47.6 years, and 51% were women. They were divided into quartiles based on the usual percentage of carbohydrates in their diet. The risks of all-cause and cause-specific death over an average 6.4-year follow-up rose with each fall in carbohydrate intake (see table), and remained significant after adjusting for all available factors that might have influenced the association (model 2 in the table).
The researchers also examined the link between all-cause death and low carbohydrate diets for obese (body mass index [BMI] 30 kg/m2 or greater) and non-obese (BMI under 30 kg/m2) participants in two age groups (55 years and older versus under 55) and found that the link was strongest in the non-obese older participants.
Regarding the mechanisms underlying the correlation between low carbohydrate diets and death, Professor Banach noted that animal protein, and specifically red and processed meat, has already been linked with an increased risk of cancer. 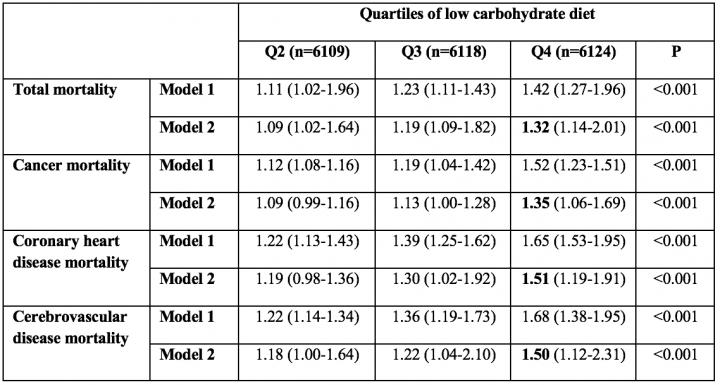 "The reduced intake of fibre and fruits and increased intake of animal protein, cholesterol, and saturated fat with these diets may play a role. Differences in minerals, vitamins and phytochemicals might also be involved," he explained.
Source: European Society of Cardiology
Image Credit: Pixabay

According to research presented at the ESC Congress 2018, people who have lots of deep forehead wrinkles, more than is typical... Read more

According to research presented at ESC Congress 2018, a clock drawing test for detecting cognitive dysfunction should be... Read more

Which is the horse and which is the jockey?  Let us share some intere 114139Read more

The 2017 Ethica Award, the highest honour of the European cardiovascular... 110709Read more