More than making lifestyle changes, new research shows that managing stress is also important in reducing the risk of cardiovascular disease and dying early. Taking off from work is found to be a good "stress reliever" and, what's more, taking vacations could prolong life, according to a 40-year study presented at the ESC Congress and accepted for publication in The Journal of Nutrition, Health & Aging.1,2

"Don't think having an otherwise healthy lifestyle will compensate for working too hard and not taking holidays," said Professor Timo Strandberg, of the University of Helsinki, Finland. "Vacations can be a good way to relieve stress."

The study included 1,222 middle-aged male executives born in 1919 to 1934 and recruited into the Helsinki Businessmen Study in 1974 and 1975. Participants had at least one risk factor for cardiovascular disease (smoking, high blood pressure, high cholesterol, elevated triglycerides, glucose intolerance, overweight).

The study participants were randomised into a control group (610 men) or an intervention group (612 men) for five years. The intervention group received oral and written advice every four months to do aerobic physical activity, eat a healthy diet, achieve a healthy weight, and stop smoking. When health advice alone was not effective, men in the intervention group also received drugs recommended at that time to lower blood pressure (beta-blockers and diuretics) and lipids (clofibrate and probucol). Men in the control group received usual healthcare and were not seen by the investigators.

The analysis presented at the ESC Congress extended the mortality follow-up to 40 years (2014) using national death registers and examined previously unreported baseline data on amounts of work, sleep, and vacation. The researchers found that the death rate was consistently higher in the intervention group compared to the control group until 2004. Death rates were the same in both groups between 2004 and 2014. 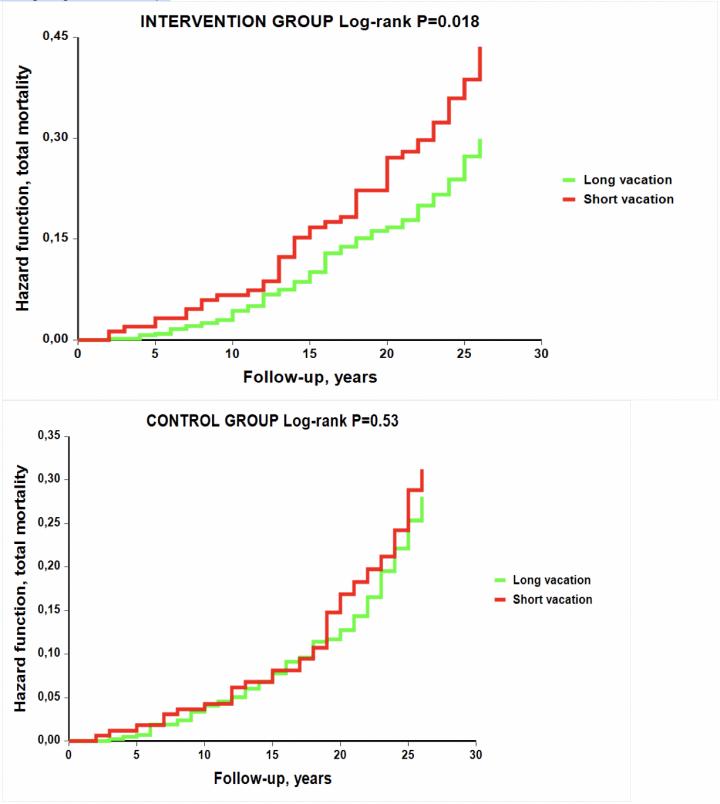 "The harm caused by the intensive lifestyle regime was concentrated in a subgroup of men with shorter yearly vacation time," Prof. Strandberg noted. "In our study, men with shorter vacations worked more and slept less than those who took longer vacations. This stressful lifestyle may have overruled any benefit of the intervention. We think the intervention itself may also have had an adverse psychological effect on these men by adding stress to their lives."

The findings suggest that stress reduction is an essential part of programmes aimed at reducing the risk of cardiovascular disease. "Lifestyle advice should be wisely combined with modern drug treatment to prevent cardiovascular events in high-risk individuals," the professor added.

According to research presented at the ESC Congress 2018, people who have lots of deep forehead wrinkles, more than is typical... Read more

According to research presented at ESC Congress 2018, a clock drawing test for detecting cognitive dysfunction should be... Read more

When it comes to imaging for ischaemic and non-ischaemic cardiomyopathy, clinicians should use their clinical acumen in order... Read more

Imprecision level of ≤10% at the 99th percentile of the normal population   The Acute Care™ cTnl assay on the Stratus ®  CS Acute Care™ Diagnostic System was the first to the market with a guideline acceptable sensitive Troponin-I assay in 2004...