Born in Elizovo, on the Kamchatka Peninsula in Russia on 14 November 1961, Prof. Valentin Sinitsyn began medical school at the Sechenov 1st Moscow Medical Institute in 1978, and graduated in 1984. From 1984 to 1988 he worked as a resident and fellow in the Diagnostic Radiology Department of USSR Cardiology Research Centre. In 1988 he was promoted to researcher and later to senior and leading researcher in the radiology department. He obtained his first doctoral thesis from the cardiology centre in 1989 (MD) and second (MD, PhD) in 1995. In 1994 he became professor of radiology. Today his main job is chief of the radiology department in the Federal Centre of Medicine and Rehabilitation. He has maintained a strong interest in cardiac imaging and serves as the Vice-President of the European Society of Cardiac Radiology (ESCR), which he co-founded. 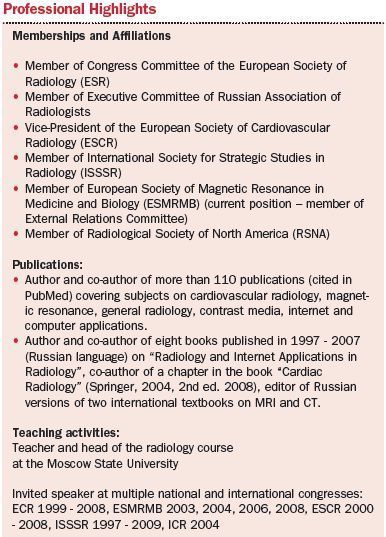 How did you get started in your career?

In 2008, I was promoted to head of the imaging department in the Federal Centre of Medicine and Rehabilitation. It was a real challenge, as the volume and complexity of my work increased  tremendously.

Please describe the Institute Where you work.

Today, I work in a modern, multi-profile hospital of 450 beds, which specialises in abdominal surgery, oncology, neurology and neurosurgery, cardiology, traumatology and sports medicine, gynaecology and urology, radiation oncology – and this is not even a full list.

Our specialists perform, annually, more than 9,000 surgical operations. Besides that, the hospital provides emergency care around the clock. Because of such multifaceted activity, demands made on the imaging department are quite high. The staff in our radiology department includes 45 radiologists and radiographers. It is equipped with three MDCT systems, four MR imagers, gamma camera and digital x-ray equipment, including a mammography service. For cardiac imaging in our department, we use 1.5T MRI (Avanto, Siemens) and VCT Discovery HD 750 (GE).

How did you come to be interested in cardiac imaging?

We work in all major fields of radiology, but cardiovascular diagnostics remains my favourite. This love of cardiac imaging began many years ago. In 1984, my hospital (at that time, the Cardiology Research Centre) acquired an MR imager- the first in the USSR. At the end of 1986, we acquired our first MR images of the heart. At this time, MR was a new area of imaging, and I was fascinated by the possibilities of this modality in cardiovascular diagnostics: one can do an assessment of heart anatomy and function, blood flow, myocardial viability and perfusion with one single modality. I still remember my first case of apical hypertrophic cardio myopathy, detected by cardiac MRI in a patient with an unknown diagnosis.

My colleagues were initially sceptical about making such a rare diagnosis with an unknown diagnostic modality, but pretty quickly they changed their minds and started to refer more and more patients with difficult diagnoses. Later, we got our hands on EBCT and started to perform coronary CTA, CT-ventriculography and studies of myocardial perfusion. After EBCT we switched to MDCT.

How did the creation of the European Society of Cardiac Radiology come about?

In 1999, a group of radiologists, including myself, founded the European Society of Cardiac Radiology (ESCR). It has grown rapidly since its foundation in 1999 and has hosted successful meetings in several European cities since the first annual scientific meeting in Berlin in 2002. The rapid growth and popularity of the society reflects the general success of cardiac radiology. Being Vice-President of the ESCR is a great professional honour for me.

What innovations will be made possible by cardiac CT and MR?

Cardiac images are getting better and better. We hope that the image quality of coronary CTA will be high enough to completely replace diagnostic invasive cardiac catheterisation in the very near future.

Besides that, many research groups are trying to use MDCT for simultaneous analysis of coronary anatomy and myocardial perfusion.

For many years, MRI was definitely superior to CT in cardiac studies, except for coronary imaging. Thanks to technological advances, cardiac CT is entering the myocardial imaging area, where until recently, nuclear medicine and MRI dominated. Even cardiac valves can be successfully imaged today with MDCT. The progress of cardiac MRI also is speeding up. Therefore, the situation between the clinical usage of CT and MRI is increasingly competitive.

Are specific management qualifications required to climb the career ladder?

Formally, in my country, one does not need special management qualifications in order to eventually be promoted to chief of a department. However, personal characteristics, experience in teamwork and working in a multidisciplinary setting, achievements in academia and research and in a variety of clinically different projects as well as poassing on knowledge and expertise through mentoring, matter a lot for any senior appointment.

One of the most enjoyable aspects of my profession is the education of young doctors. My department is a base for teaching radiology to medical students from the medical faculty of the Moscow State University and postgraduates from different institutions.

Since the mid ‘80s, we presented our papers and abstracts at different international meetings, read articles and books from our colleagues from Europe and the U.S. and, step-by-step I became acquainted with those radiologists performing non invasive cardiac imaging. Later, I got invitations to present lectures on cardiac imaging. One of the challenging aspects of my job is that running a radiology department takes a lot of my time. Honestly speaking, I didn’t expect that it would be so complicated. Nevertheless, I still find time for clinical work and to organise and direct research activities in my department.

How strong is the need for good leadership in cardiac radiology?

I believe that today, a radiologist must be a real leader and expert in his field. We are not just interpreting cardiac images. A good cardiac radiologist contributes a lot to a patient’s further management, helping to define further strategy and diagnostic work-up and treatment. Good cooperation between radiologists and cardiologists is crucial for achieving best results in cardiac imaging.

How comparable is the level of available sophisticated cardiac imaging technology in Russia to Western Europe?

The backbone of cardiac imaging is still formed by echocardiography and cardiac catheterisation. We have some local guidelines for usage of MDCT and MRI in cardiac patients written with my participation. At the end of the last century just a few academic centres in Russia performed cardiac imaging with EBCT, 4-row MDCT or high field MRI.

Today the popularity of cardiac radiology is tremendous. During the last five to six years, Russian hospitals acquired hundreds of MDCT and MRI systems. Russian radiologists like their western colleagues – have the latest generation CT and MR scanners. Information about the outstanding diagnostic capabilities of modern diagnostic equipment have spread all over our community and many radiologists are eager to master new fields of imaging like coronary CTA or cardiac MR. In conclusion, it looks like cardiac imaging, worldwide in general and in Russia in particular, is evolving and gaining in popularity.


Co-Founder of the European Society of Cardiac Radiology Talks About Collaboration Between Cardiologists and Radiologists Born in Elizovo, on the Kamchatka...

An alternative to Tropinin I that aids in diagnosing acute myocardial infarction   The Acute Care™ CK-MB assay is an in vitro diagnostic...