Also, diastolic dysfunction can be secondary to pathological states that adversely affect passive compliance during diastole, such as increases in myocardial wall thickness observed in concentric hypertrophy as a result of longstanding hypertension, or in myocardial fibrosis in patients with infiltrative pathology.

The Role of Echocardiography in the Assessment of Diastolic Function

Diastolic function can be evaluated noninvasively using two-dimensional transthoracic echocardiography. The evaluation of left ventricular diastolic function should be an essential part of any echocardiography examination. The three phases of diastole consist of a period of isovolumic relaxation time (IVRT) followed by early rapid diastolic filling period (E), a plateau and finally a late filling due to the atrial contraction or atrial kick (A). These can be evaluated by using the pulse wave (PW) Doppler of the mitral valve and pulmonary veins. The left ventricular filling pattern obtained will therefore indirectly reflect the left ventricular filling pressures. A complete left ventricular diastolic assessment should include assessment of the IVRT, peak E velocity, peak A velocity, E/A ratio, deceleration time (DT), and A duration, which are obtained from the transmitral inflow velocities. Pulmonary vein (PV) flow velocities are then measured, which include four components: two systolic velocities (PVs1) and (PVs2), diastolic velocity (PVd), and atrial flow reversal (PVa). Based on the echocardiographic parameters, diastolic dysfunction has been divided in three different grades of severity of ventricular compliance, relaxation rate, and filling pressures. Mitral annular velocity by tissue Doppler imaging also has been used to assess diastolic function. This referred to as E’. The E m (mitral)/ E’ (annular) ratio has been found to correlate well with increased pulmonary capillary wedge pressure (PCWP).The E/E’ ratio is normally less than 8. The E’ is shown to be low in restrictive stage less than 8. A ratio of greater than 15 indicates elevated PCWP (see figure 4). Although rarely performed for evaluation of diastolic dysfunction alone, the most accurate invasive diagnostic technique is cardiac catheterisation with direct measurements of left ventricular end-diastolic pressure. Parameters of chamber stiffness are correlated with changes in pressure to changes in chamber volume. 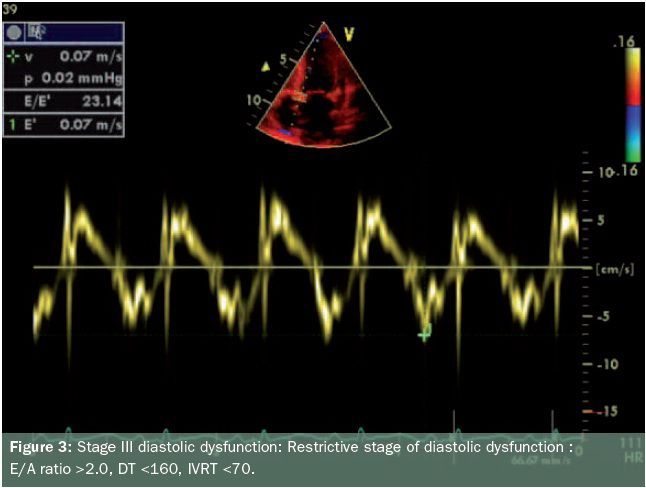 The underlying connection in the possible etiologies of left ventricular diastolic dysfunction is their ability to hinder one or both of the intrinsic diastolic properties of compliance or relaxation. Pathological states such as fibrosis and concentric hypertrophy can reduce compliance of the myocardium by increasing passive ventricular stiffness, thereby affecting the passive property of compliance in diastole. Ischaemia and disease processes leading to increased afterload affect diastole by impairment of the active rate of relaxation.


Diastolic dysfunction represents a mechanical malfunction of the relaxation of the left ventricular chamber primarily diagnosed by two-dimensional transth...