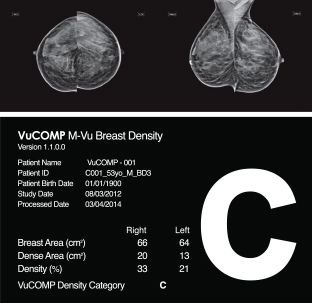 Share
Download PDF
VuCOMP, Inc. has announced that it has received clearance to sell and market its M-Vu Breast Density product in Canada.
The clearance is timely as bill C-314, An Act Respecting the awareness of screening among women with dense breast tissue has been introduced in Canada. The act requires the Government of Canada to encourage the use of existing initiatives in order to increase awareness among women about the implications of heterogeneous or dense breast tissue for breast cancer screening, and to assist women and healthcare providers in making well-informed decisions regarding screening.
Jim Pike, President and CTO of VuCOMP stated, “We are pleased to now offer M-Vu Breast Density to the breast radiology community in Canada. Breast cancer is the second leading cause of death from cancer in Canadian women, with over 24,000 women diagnosed each year. We hope our M-Vu Breast Density tool will aid radiologists as they fight to lower this statistic.”
Clinical studies have shown that dense breasts can hide a cancerous lesion by reducing the ability to visualise fine structures and details that could indicate a malignant abnormality, making breast cancer detection in a mammogram more difficult. M-Vu Breast Density is designed to advance the science of breast density measurement by identifying dense tissue in the breast that could be masking cancer.
In addition to M-Vu Breast Density, clinics around the world are using the company’s M-Vu® Computer-Aided Detection (CAD) for mammography. M-Vu CAD analyses mammograms to mark areas consistent with breast cancer using sophisticated mathematical algorithms.
Source and image credit: VuCOMP

Breast density, VuCOMP VuCOMP, Inc. has announced that it has received clearance to sell and market its M-Vu Breast Density product in Canada. The clearance is timely as bill C

IASS Potsdam: Unveiling the connections of a complex world