Share
Download PDF
Researchers in the UK have developed an algorithm to monitor the joints of patients with arthritis, which could change the way that the severity of the condition is assessed. The technique uses images from a standard computerised tomography (CT) scan, which isn't normally used to monitor joints, but produces detailed images in three dimensions. Their work is reported in the journal Scientific Reports.
The technique detects tiny changes in arthritic joints, which could help clinicians gain a better understanding of how osteoarthritis develops. This also provides a better way to assess the effectiveness of new treatments, without the need for invasive tissue sampling. The technique was developed by a team of engineers, physicians and radiologists led by the University of Cambridge.
Osteoarthritis is normally identified on an x-ray by a narrowing of the space between the bones of the joint due to a loss of cartilage. However, x-rays do not have enough sensitivity to detect subtle changes in the joint over time.
"In addition to their lack of sensitivity, two-dimensional x-rays rely on humans to interpret them," explained lead author Dr. Tom Turmezei from Cambridge's Department of Engineering. "Our ability to detect structural changes to identify disease early, monitor progression and predict treatment response is frustratingly limited by this."
The semi-automated technique developed by Dr. Turmezei and his colleagues is called joint space mapping (JSM). The JSM algorithm analyses CT images to identify changes in the space between the bones of the joint in question, a recognised surrogate marker for osteoarthritis. After developing the algorithm with tests on human hip joints from bodies that had been donated for medical research, they found that it exceeded the current "gold standard" of joint imaging with x-rays in terms of sensitivity, showing that it was at least twice as good at detecting small structural changes. Colour-coded images produced using JSM illustrate the parts of the joint where the space between bones is wider or narrower.
"Using this technique, we'll hopefully be able to identify osteoarthritis earlier, and look at potential treatments before it becomes debilitating," said Dr. Turmezei, who is now a consultant at the Norfolk and Norwich University Hospital's Department of Radiology. "It could be used to screen at-risk populations, such as those with known arthritis, previous joint injury, or elite athletes who are at risk of developing arthritis due to the continued strain placed on their joints." 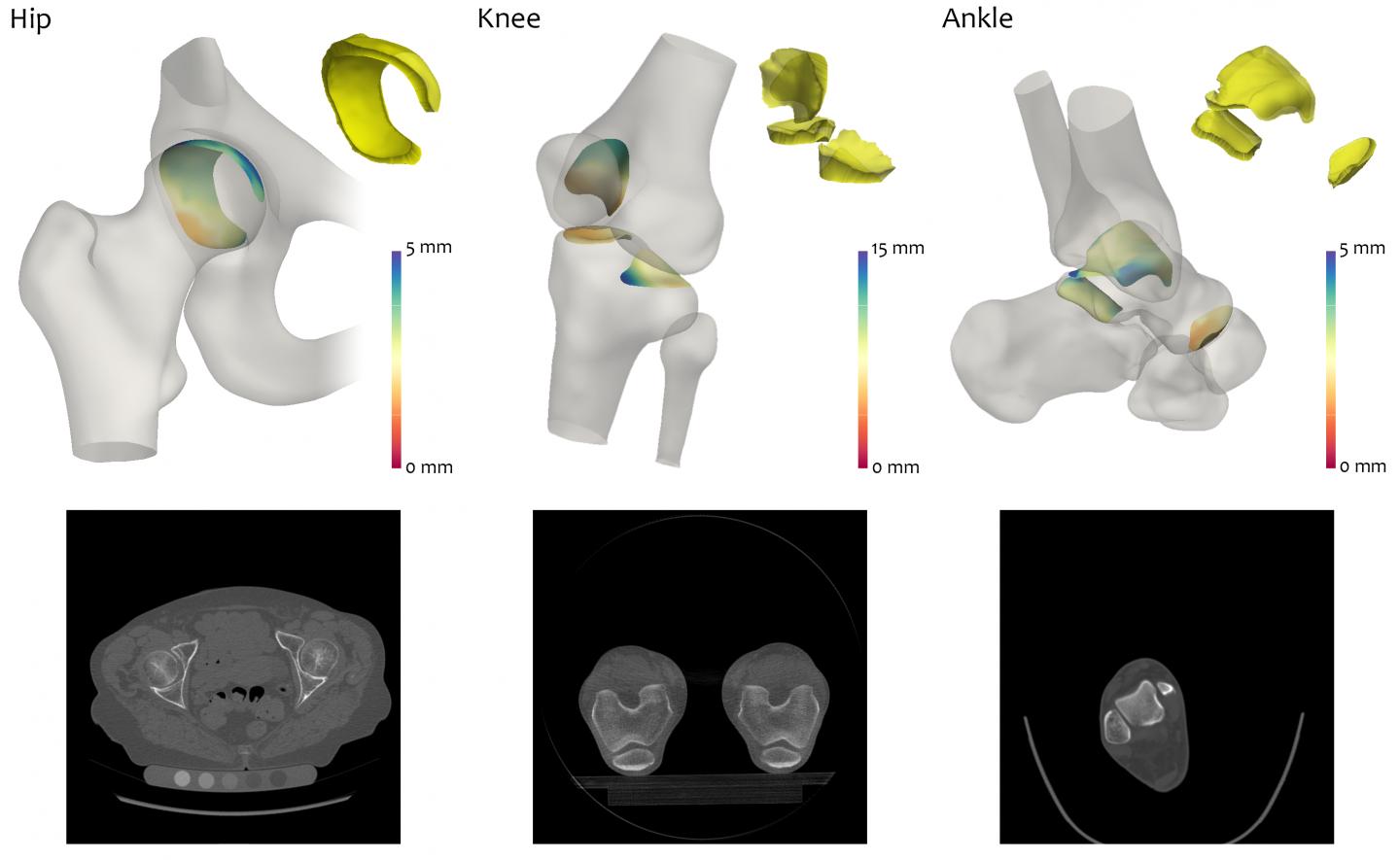 Joint space in hip, knee and ankle joints as analyzed by the JSM algorithm.
According to the researchers, the success of the JSM algorithm demonstrates that 3D imaging techniques have the potential to be more effective than 2D imaging. When combined with 3D statistical analysis, JSM could also be used to speed up the development of new treatments for arthritis, Dr. Turmezei added.
Source: University of Cambridge
Image Credit: Tom Turmezei

Imaging Manifestations of COVID-19 vs. MERS/SARS

Coronavirus disease (COVID-19) has now affected millions of people and caused over 250,000 deaths globally. Since the first outbreak... Read more

Arthritis, 3D imaging, CT scan Researchers in the UK have developed an algorithm to monitor the joints of patients with arthritis, which could change the way that the severity of the condition is assessed. The technique uses images from a standard computerised tomography (CT) scan, whi