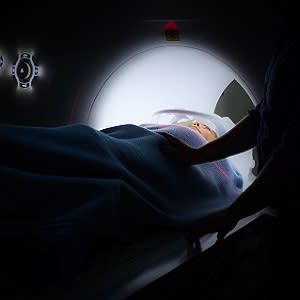 Share
Download PDF
In the United States, prostate-specific antigen (PSA) screening is often performed annually, with a low threshold for biopsy and aggressive treatment for detected cancers. Now, the use of multiparametric (functional and anatomical) magnetic resonance imaging (MRI) is being examined for the evaluation of men with an elevated PSA level.
The findings of the PRECISION (Prostate Evaluation for Clinically Important Disease: Sampling Using Image Guidance or Not?) trial, "suggest that multiparametric MRI may have a place in decisions about prostate biopsy," as noted in an editorial published by The New England Journal of Medicine.
The PRECISION study was a multicentre comparison of two strategies for biopsy among men with suspected prostate cancer. In that trial (by Kasivisvanathan et al.), men with an elevated PSA level or, much less frequently, an abnormal digital rectal examination, who had not undergone biopsy previously, were randomly assigned to undergo either multiparametric MRI, with or without targeted biopsy, or a standard 10-to-12–core, transrectal ultrasonography–guided biopsy.
MRI can be used in a targeted biopsy in different ways, according to the editorial, which explains that performing the biopsy in the MRI gantry is the most direct option -- but it was not used in the PRECISION trial. Alternatively, the results of multiparametric MRI can be used to inform transrectal ultrasonography–guided biopsy.
"In the PRECISION trial, the trial centres were allowed to use different protocols and equipment for multiparametric MRI, including optional use of an endorectal coil and use of either cognitive or fusion biopsy. Such heterogeneity may be vexing for some; however, this pragmatic approach helps to ensure generalisability," explains the editorial authored by Michael J. Barry, MD, Division of General Internal Medicine, Massachusetts General Hospital and Harvard Medical School, Boston, and Andrew B. Rosenkrantz, MD, Department of Radiology, NYU Langone Health, New York.
For the trial's primary outcome, the strategy of multiparametric MRI, with or without targeted biopsy, was superior to the strategy of standard biopsy, with a significantly higher percentage of men receiving a diagnosis of clinically significant prostate cancer (38% vs. 26%). In addition, fewer men in the MRI-targeted biopsy group than in the standard-biopsy group received a diagnosis of clinically insignificant cancer (9% vs. 22%), and 28% of the men in the MRI-targeted biopsy group did not undergo biopsy.
These results, the editorial notes, are similar to the results of the PROMIS study, in which men with suspected prostate cancer underwent multiparametric MRI and transrectal ultrasonography–guided biopsy, as well as template prostate-mapping biopsy. The PROMIS study showed that the sensitivity of multiparametric MRI in detecting disease of Gleason sum 7 or higher (a definition of clinically significant prostate cancer similar to that used in the PRECISION trial) was 88% (95% confidence interval [CI], 84 to 91), whereas the sensitivity of transrectal ultrasonography–guided biopsy was 48% (95% CI, 43 to 54). "However, the sensitivity of multiparametric MRI may be overestimated, since MRI-targeted biopsy was not performed separately," the editorial points out.
"The results of the PRECISION trial represent intermediate outcomes, whereas outcomes such as prostate-cancer morbidity and mortality will take large numbers of men and many years to assess," the editorial says. "Because of the major implications for wider use of multiparametric MRI in evaluating men with elevated PSA levels — including the need for additional MRI equipment and personnel and the effect on total costs — these findings should be replicated and extended."
Source: The New England Journal of Medicine
Image Credit: Unsplash.com