According to a new study published in Radiology, MRI can provide important information about a woman’s risk of developing breast cancer. The findings suggest that MRI can play an expanded role in breast cancer screening and prevention.

Previous studies show that dense breast tissue is associated with an increased likelihood of breast cancer development. However, assessing the future risk of breast cancer for women remains a challenge and that is why the oncology community is always looking for ways to better determine this risk.

One such potential tool is the contrast-enhanced MRI. It is already being used to supplement mammography in high-risk women. American Cancer Society guidelines recommend the use of annual breast MRIs in women with a 20 percent or greater lifetime risk of developing breast cancer in addition to routine annual screening mammography.

Study co-author Habib Rahbar, MD, a breast imaging expert at Seattle Cancer Care Alliance and assistant professor at the University of Washington, and colleagues reviewed screening breast MR images from high-risk women 18 years or older with no history of breast cancer who were screened at their institution from January 2006 to December 2011.

The research team looked for any associations between cancer risk and imaging features, including breast density and background parenchymal enhancement (BPE), a phenomenon in which areas of normal background breast tissue appear white, or enhanced, on the MR images. Previous research suggests that this enhancement may be linked to cancer risk.

The results of the study showed that women with elevated amounts of BPE on MRI were nine times more likely to have a breast cancer diagnosis during the study follow-up interval than those who had no or minimal BPE. The findings did not show any relationship between mammographic density and cancer risk.

The findings show that BPE could help physicians tailor screening and management strategies according to each individual’s breast cancer risk. Women at high risk for breast cancer can be helped with preventive treatment options including supplementing screening mammography with MRI, prevention therapy with tamoxifen, and preventive mastectomies. If validated in larger studies, BPE could provide more information to help guide these important decisions.

“MRI could be used in a broader group of women to determine who most needs supplemental screening based on their BPE levels,” Dr. Rahbar said. “This is important as we move into an era of more personalised medicine.”

The research team is now working to validate the findings in a larger group of patients and also plans to conduct additional research to gain more understanding about BPE and why it may serve as a biomarker of breast cancer risk. One theory is that BPE is related to areas of inflammation associated with early stages of the disease. Dr. Rahbar points out that breast cancer requires a supportive environment to grow and areas of inflammation are conducive to such growth. 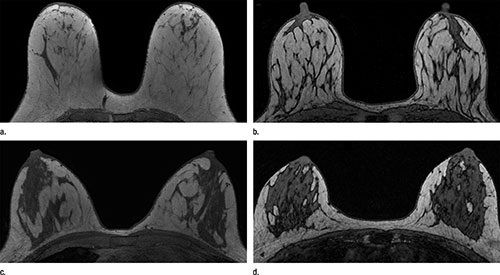 Figure 4. Postcontrast maximum intensity projection in a 48-year-old woman with a genetic history of breast cancer and prior excisional biopsy in the left breast shows moderate background parenchymal enhancement. A diagnosis of invasive ductal carcinoma was made 1044 days after index MR imaging.

Scientists at the research Institute MIRA at the University of Twente in the Netherlands have developed PAMmograph, a new technique... Read more