Hybrid imaging systems and their applications have gained widespread acceptance and continue to grow. Enthused by the success of PET-CT, medical imaging is witnessing the further development of hybrid solutions such as PET-MR and SPECT-CT through the collaboration of radiology and nuclear medicine. The emphasis lies in combining the strengths of functional and anatomical modalities into one system to provide a powerful hybrid imaging and diagnostic tool.

Since its advent in 2001, PET-CT has established itself as a clinical tool for oncology: diagnosis, staging and restaging of cancers. This hybrid imaging modality has a proven sensitivity of 90 percent to 100 percent, specificity of 70 percent to 100 percent, and an accuracy of 90 percent to 96 percent for characterisation of tumours. PET-CT provides high-quality clinical data making it a potentially attractive modality for radiation oncology applications. This hybrid system proves beneficial to patients and provides and overall cost savings as the need for separate scans are reduced. It also proves economic for imaging centres and healthcare facilities as the modality is not only used for fusion imaging but can also be used as a dedicated PET or dedicated CT depending on the facility’s needs. 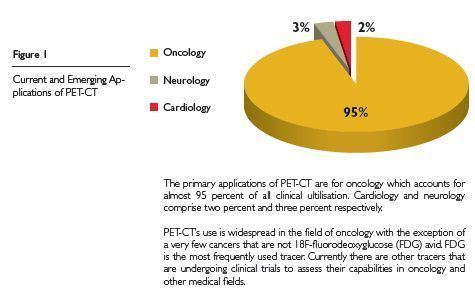 However the delaying factors for PET-CT are the inability to perform simultaneous scans as PET and CT images are acquired in sequences. other drawbacks of the system include poor soft tissue contrasts and artifact generation due to patient and organ motion as well as varied breathing protocols for PET and CT. PET amyloid specific radiotracers are currently being developed to distinguish between Alzheimer's disease (AD) and frontotemporal dementia (FTD), and dementia with Lewy Bodies (DLB). other amino acid PET tracers include F-18 fluorothymidine showing potential for the imaging of brain tumours. Flurocholine 11C choline is also undergoing trials and being assessed for its potential in prostate cancer. other radiotracers being developed and investigated for hepatic and prostate cancer include 11C-methionine, 68Ga-DoTANoC, 11C-acetate, 11C-thymidine, and 18F-DoPA.

Although the use of PET-CT in cardiology and neurology is not as significant as in the case of clinical oncology, the development of novel radiopharmaceutical agents is expected to widen the scope of PET-CT applications beyond oncology and towards cardiology and neurology. Recent studies suggest that PET-CT-based MPI using Rb-82 has comparatively better diagnostic characteristics than the traditional SPECT-based MPI studies done using Tc-99. SPECT-CT is also being used in bone disease diagnosis and management.

Current and Emerging Applications of SPECT-CT

SPECT-CT is gaining momentum in the orthopaedics, disease and infection diagnosis. The hybrid modality has been clinically proven to evaluate and diagnose infection and inflammation. SPECT-CT offers an edge above conventional SPECT systems owing to its ability to localise cardiac disease states. other emerging applications for SPECT-CT in cardiology include myocardial perfusion imaging. Recent clinical studies suggest that attenuation correction using hybrid SPECT-CT improved specificity in the right coronary artery, but decreased specificity in the left anterior descending. SPECT-CT has also been proven useful in diagnosing non-FDG cancers such as prostrate, neuroendocrine, thyroid and parathyroid cancers. 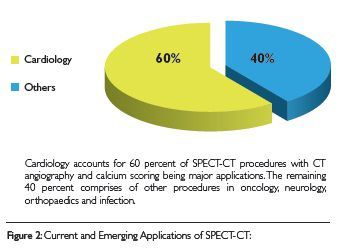 Current and Emerging Applications of PET-MRI

In comparison to CT, MRI offers endogenous contrasts and is preferred for imaging of soft tissues. Some of the current and emerging applications of PET-MRI are within the cardiology, oncology, neurology and preclinical imaging space. In addition PET-MRI does not deliver high radiation doses and can exploit soft tissue contrast of MRI to a great extent. The benefits of this hybrid modality have increased its clinical utility. This modality is gaining acceptance and being widely used for applications such as brain imaging wherein MRI has proven to be more effective than CT. other applications include those that require excellent spatial resolution as this hybrid modality is known to provide good resolution. However, there are some technical challenges to be addressed such as attenuation correction and electromagnetic interference.

Some of the trends being witnessed in the PET-MRI space are the development of cardio PET radiotracers and specific nanoprobes for MRI which could positively impact the early diagnosis of ischaemic heart disease, acute coronary syndrome, and acute and chronic myocarditis. PETMRI is also gaining momentum in the detection of lymphomas and lung nodules and is considered a more effective alternative as opposed to PET-CT.

PET-MRI has high potential in the neurology sector. Recent studies suggest that PET-MRI is more useful for brain studies than FDG-PET; for example, Alzheimer's disease. While FDG-PET findings are based solely on estimates, perfectly aligned MR-PET data presents findings with greater levels of accuracy.

According to the research team from John Hopkins University, led by Benjamin Tsui, PhD, SPECT-MRI is expected to be a viable technology that could enhance the diagnostic capability of SPECT alone and provide additional information that could not be provided by SPECT-CT. The modality is now in a preclinical prototype stage to be extended to clinical brain studies with clinical trials expected to begin within three or four years.

On the market front, the reimbursement coverage for FDGbased procedures is increasing, resulting in high competitiveness among FDG distribution networks to meet the increasing demands for FDG. A steady growth in the number of radiopharmaceutical suppliers is expected to decrease the average selling price of FDG. Low costs, availability and demand of FDG are expected to drive the deployment of PET-CT. The adoption rate of SPECT-CT has rather been slow as opposed to PET-CT; this could be mainly attributed to lack of reimbursement policies for SPECT-CT based studies. This hybrid modality is expected to witness growth in infection and bone imaging applications, creating market opportunities for radiopharmaceutical vendors. The sales of this hybrid modality are expected to overtake sales of stand-alone SPECT systems. SPECT-CT will continue to show moderate growth as new clinical applications emerge.

On the other hand the emergence of PET-MRI is expected to hinder market growth of SPECT-CT in the neurology market in particular. This owes to the fact that PET-MRI’s simultaneous imaging capability could aid in early diagnosis of neurological disease and offer high sensitivity and accuracy. Further PET-MRI is better placed in comparison with SPECT-CT, as it suffers from image mis-registration. These advantages of PET-MRI are likely to pose a threat to other nuclear medicine technologies in the long-term future.

Hybrid imaging has identified niche markets for penetration, which include orthopaedics such as bone scans, infection imaging, selective internal radiation therapy (SIRT), and apoptosis imaging, thereby creating the need for the development of novel diagnostic radiotracers to tap these potential markets.


Hybrid imaging systems and their applications have gained widespread acceptance and continue to grow. Enthused by the success of PET-CT, medical imaging i...

Run a successful CT business   Patients becoming critical consumers is a strong trend that can be observed around the globe. Stay competitive in the long run with a CT scanner that helps you improve patient experience throughout the CT...