Traditionally, radiologists in the UK and other parts of the world have worked to timetables based on the radiographic list. Sessions, usually lasting a half-day, would be defined by modality. For instance, the CT or MRI scans performed during that session would be reported by the radiologist, to whom that session “belonged”. Other sessions might be put aside for plain film or other reporting, for example nuclear medicine. Other sessions could be considered to be hands-on, such as interventional radiology, ultrasound (if performed by the radiologist) and “hot” duties. This can be seen as a rather inflexible way of working and does not optimise the efficient use of resources, in terms of both equipment and personnel.

The creation of a system for the fair allocation of workloads, which is balanced for each member of the department, has long been a challenge. Another driver for change is the demand for extended hours working in diagnostic imaging, beyond the traditional office hours (Monday to Friday after 17.00 p.m.) with emergency on-call services only available beyond these hours. In The West Hertfordshire NHS Trust (WHHT) we have introduced an IT-based flexible generic reporting system, which also manages interlocking rotas, providing extended working hours.

In 2009, a free standing 120-bed Acute Admissions Unit (AAU) with integrated diagnostics (plain film, CT, US and reporting facilities) was opened within our trust. This was in order to introduce a new service delivery model for acute care. The aim was to improve patient care and reduce length of stay, allowing fewer acute care beds and improving hospital-acquired morbidity. The model utilises seven days working with early senior clinical input and diagnostics in order to improve decision-making and diagnostic certainty. Consultant level ward rounds are held at least daily on a 365-day basis, supported by an extended day working in clinical support and therapy areas.

Activity mapping prior to the changes suggested that all emergency and in-patient investigations equated to approximately 20 hours of radiologist time. The radiology department agreed to provision this on an 08.00 a.m. – 20.00 p.m. basis Monday to Friday and to provide a radiologist on-site between 09:00 a.m. - 13:00 p.m. on weekends and bank holidays (the hours being constrained by financial and other staffing considerations), supported by radiographers and radiographic assistants. The AAU radiologists are responsible for all in-patient investigations and simple radiological interventions.

Use of Information Technology

The departmental rotas and work lists are managed by a spreadsheet- derived, in-house authored programme we call Wizrad. This programme has a scheduling function that identifies each of the radiologists on the individual rotas, a diary function with a record of each person’s leave and a workload function that calculates the number of examinations of different modalities that each radiologist has the time to report on a weekly basis. A new version is currently undergoing commercial development designed to provide comprehensive business intelligence and clinical governance functionality. Radiology reporting is performed from individual work lists on a Radiology Information System integrated with PACS.

We have 18 radiologists who work to multiple rotas (see table 1). Most radiologists spend approximately one week in four in AAU either as AAU1 (08.00 a.m. – 16.00 p.m.) or AAU2 (10.00 a.m. – 18.00 p.m.). Specialties having greater fixed commitments, e.g. breast radiology, have reduced presence in the AAU. There are further evening, weekend and bank holiday rotas as well as a traditional out-of- hours on-call rota. 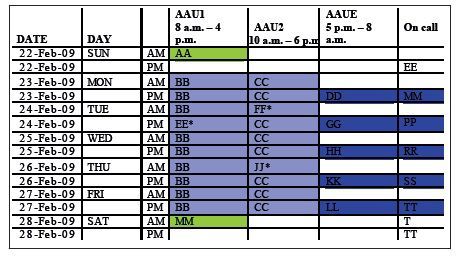 Most UK radiologists are employed by the NHS on a standard timebased contract. This is comprised of four-hour units known as programmed activities (PAs). A full-time consultant will typically be employed on between 10 and 12 PAs, equating to 40 - 48 hours. PAs are classified as direct clinical care (DCC), supporting professional activities (SPAs) and others (managerial, etc.). SPAs include activities such as clinical governance, audit and education whilst DCC includes all clinical activity, including multidisciplinary meetings.

During AAU weeks, working hours are defined by the rotas. When not in AAU the radiologist performs traditional type work, although not with traditional lists (other than if hands-on). The radiologist’s reporting workload is calculated by Wizrad. This system allows flexibility in the provision of “fillers” when the scheduled AAU1 or AAU2 radiologist is not available.

The reporting workload is allocated based on the amount of time available for this activity within the individual’s job plan on a week-by-week basis. The calculation starts with the number of contracted PAs (see table 3). From this an allowance is subtracted for the evening and weekend rotas, oncall commitment, SPAs and other non-clinical activities. The remaining DCC time then has hands-on time removed. Only the actual time spent on these activities is credited, for example an ultrasound list running from 09:00 a.m. - 12:30 p.m. will credit 3.5 hours. The system can allow for activities performed on an irregular basis, such as multidisciplinary meetings attended on alternative weeks. Preparation time for such activities is also allowed for. Interventional procedures are averaged over the year. 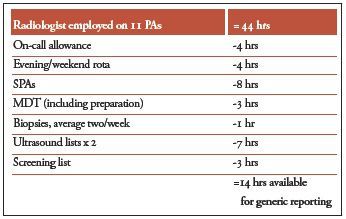 Table 3: Worked example of a weekly job plan (radiologist available for all sessions)

The remaining time is allocated for generic reporting of a mixture of modalities, primarily plain films, CT, MRI and nuclear medicine. The ratio of the modalities is agreed on an individual basis and can be set at 0 percent if the radiologist does not do that modality. Individual examinations are apportioned a time tariff based on complexity, and this includes allowance for vetting, verifying, and so on. Wizrad can apply weightings for time-consuming activities such as voice activated dictation and teaching.

Table 4: Example of a radiologist’s workload for one week, taken from Wizrad. An AAU session has replaced a reporting session. Dumping refers to the days on which that radiologist’s work is to be allocated. N.B, this reflects more than eight hours of reporting time.

Workloads for the individual radiologist are then available to the radiographer modality leads. They are responsible for allocating the cases to the radiologists’ digital work lists from where they are directly reported. The work is allocated allowing for subspecialty interest. There is some flexibility whereby capacity can be swapped between the modalities if necessary.

Radiological output has increased by approximately 25 percent. The changes have proven popular with the radiologists; there is no desire to return to the previous system. They have a great deal of flexibility as to when they perform their reporting, and clock watching is a thing of the past. Morale has been greatly improved as reporting is apportioned on a transparent, equable basis.

This has also proven to be a powerful management tool. Reporting capacity is now fully mapped and can be accurately predicted. Potential staffing shortfalls can be predicted and re-allocated as necessary. As we have a clear idea of capacity, it is much easier to justify the size of the radiological establishment and negotiate new posts.

The timetabling model that I have described works well in my department, which does not necessarily indicate that it would be suitable in other settings. However it is clear that major improvements in radiologist working practices can be achieved with consequent advantages to both the practitioners and the service they support.


Traditionally, radiologists in the UK and other parts of the world have worked to timetables based on the radiographic list. Sessions, usually lasting a ha...