The Royal College of Radiologists (RCR) of the UK has just released iRefer: Making the best use of clinical radiology. Despite the new name, this is the seventh edition of the radiology referral guidelines, demonstrating through more than 20 years support, the RCR’s commitment to the importance of guidelines in the delivery of radiology services for patients. Evidence from the increasing use of diagnostic radiation and publications on the percentage of unnecessary test requests indicates that such a resource is essential.

Diagnostic radiology in the USA accounts for as much per capita radiation as natural causes (up from 15 percent in 1980 to 48 percent in 2006) [NCRP 2009]. The number of CT examinations has increased at 10 percent per annum in the USA since 1980, from 3 to 80 million, driven by technological advances and combined with increasing complexity and multiple phases. Estimates are that up to 44 percent of CT exams may not be justified [Hadley et al. 2006].

The RCR realises that the production of guidelines alone is not enough; the next step is to ensure that they are used effectively. This view is supported by the European Medical Directive [European Union 1997], World Health Organization (WHO) Global Initiative [WHO 2010] and several International Atomic Energy Agency (IAEA) workshops all advocating the use of, and compliance with, referral guidelines. A project, sponsored by the European Commission, is under way to survey the use of such guidelines in member states, and in 2012 an IAEA workshop will address guideline methodology and distribution.

Why are Guidelines Needed?

Evidence-based referral guidelines help in the choice of the right radiological investigation and in so doing facilitate:

Good guidelines build the best available evidence into the decision- making process and are there to help make the right choice and also for reference when the referrer might be in doubt. The right radiological investigation will always obtain maximum information with the minimum of radiation, inform clinical management, reassure the patient and add confidence to the clinician’s diagnosis. The wrong investigation won't help – and it may add unnecessarily to patient irradiation.

The development of the iRefer guidelines (formerly referred to as Making the best use of clinical radiology services; MBUR) has evolved over its seven editions to incorporate a more evidence-based approach. The enhanced guidelines methodology has been accredited by NHS Evidence, managed by the National Institute for Health and Clinical Excellence (NICE).

Stratification of recommended investigations is based on:

Particular consideration has been made in the paediatric population recognising the different spectrum of diseases and the increased sensitivity to the biological effects of radiation.

Who Should Use Referral Guidelines

Additionally, since 2006, imaging referrals in the UK have been accepted from appropriately trained, experienced healthcare professionals who are not medically qualified. Referral guidelines are also helpful to radiological practitioners for the ICRP level 2 [ICRP 2007] generic justification of investigations, particularly to avoid ionising exposures where a suitable and effective non-ionising alternative exists. Whereas the ICRP level 3 justification on an individual basis can only be made with dialogue between referring and radiological practitioners, guidance incorporating an up-to-date knowledge base informs this process of both efficacy and radiation dose. Such guidance must include choice – where appropriate – to enable the best test within resource constraints.

There is evidence that justification is lacking for many radiological procedures and that the number of such procedures may be reduced by use of referral guidelines. After the publication of the first edition of the RCR referral guidelines in 1989, there was seen to be a reduction in referrals for plain radiographs by 13 percent, from 88.4 to 77.2 referrals per thousand patients [Royal College of Radiologists 1993]. The following year, a randomised controlled study by GPs in the UK showed significantly fewer referrals for lumbar spine radiography and a higher proportion of requests conforming to guidelines, in the group of GPs to whom guidelines were distributed [Oakeshott et al. 1994].

This early success by simple distribution of guidelines was not sustained in a longer study over four years [Matowe et al. 2002], and additional strategies were clearly required. Feedback of audit data regarding unjustified referrals for lumbar spine and knee radiographs was ineffective at reducing referral rates, but an educational reminder in reports for such incompletely justified investigations was helpful in producing a 20percent reduction [Eccles et al. 2001]. This effect was sustained [Ramsay 2003].

With so many benefits, the case for guidelines is obvious but despite this the RCR, like others, struggles to get healthcare professionals to embrace their use. It is difficult to get referring clinicians to use them without some form of encouragement, effective feedback or sanctioning. The reasons for this are many, including issues around time pressures, inaccessibility of guidelines, information overload, mixed messages from different guidelines, and patient expectations.

Clinical audit for improvement and monitoring

Clinical audit has been shown to be one way of improving compliance with guidelines. The power of such a voluntary process should not be under-estimated with reported improvement in inappropriate utilisation of lumbar spine radiography by up to 70 percent [Patatas 2008]. Other examples of local internal audit may be found on the RCR website [RCR 2010]. More formal external audits are available in some regions, most notably in Europe [Faulkner 2010]. Monitoring of individual’s radiation dose may now be made utilising a Smart Card [IAEA 2010].

When voluntary methods for monitoring and ensuring compliance are ineffective or unwanted, the last resort is regulation either by legislation or by reimbursement by payers. Under such circumstances, the clear message for radiation protection through justification occasionally may be muddied by conflicting interests, usually to reduce costs. Audit may be usefully combined with a regulatory process [Hirvonen-Kari et al. 2010].

Added to the challenges of implementation is the ongoing production of up-to-date evidence-based guidelines. The RCR has relied heavily on the enthusiasm and dedication of a significant number of its members giving up their time to support this work. Even so, there is a considerable cost required to resource the process and the production of the final versions, particularly as the process becomes, rightly, more robust and the delivery more complex. In the past, this process has been supported by funding nationally outside the College, but recurrent support in its entirety has proved difficult and so the challenge is to look at other models of ensuring effective use of the guidelines.

Figure 1: iRefer is available as an app for iOS and Android platforms

The RCR is answering this challenge by innovating. The new name, iRefer, brings with it new methods of making the guidelines available. Gone is the old reliance on printed versions; the new guidance is predominantly web-based (Figure 2).

In addition, there is now an iRefer App for iOS and Android devices – so referrers need never be without the guidance. The RCR is particularly keen to develop decision support software based on its guidelines, so that iRefer can be used exactly when needed – when the decision to refer is made. 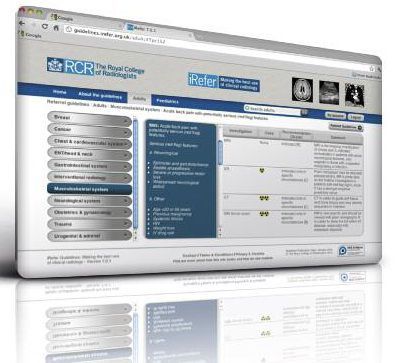 Figure 2: The online version of iRefer

Despite the challenges of implementation and the obstacles of lack of funding for the ongoing review and update of the evidence, the RCR and its members remain passionately committed to the ongoing production of guidelines and we will continue the look at novel ways to make them more available and more effective.

The Royal College of Radiologists (RCR) of the UK has just released iRefer: Making the best use of clinical radiology. Despite the new name, this is the se...