How ICU diaries can help patients and families

I work in a small intensive care unit (ICU) where we have been writing diaries since 1992. Initially, they were just little black books with notes by staff and families on how patients were doing during their ICU stay. In 1999, we began taking photos of the patients to illustrate their critically ill period, to help them understand and see what happened. Follow-up teams were introduced in 2012 with guidance from the Swedish Intensive Care Registry, including health form SF-36. We visit patients in the ward after ICU discharge to see how they are and offer them follow-up. The health form used since 2016 is RAND-36 and should be completed two, six and twelve months after discharge. Follow-up is individual, voluntary and free of charge.

Patients are often very grateful for the diary, although it is not unusual for them to just flick through it or even not look at it at all during the first follow-up visit. Recovery will take time and follow-up focuses on patients’ needs. It is important to listen to whatever the patients want to talk about during the visit. The importance of the diaries is demonstrated when patients have vivid memories and the diaries are able to provide explanations. For example, a patient remembers his throat being cut with a knife; the diary tells the patient he had a central venous catheter put in and we can then explain the procedure to him. Patients have such wide-ranging comments. It is often a relief for them to tell us stories their relatives don’t believe and sometimes we can help them find some kind of reality in the story or just reassure them that it can be like that after ICU. For some patients, their entire stay is a blank, so for them the diary is a precious tool. There are also patients who decline follow-up. They usually say they don’t need it, but it is possible that they are suffering in silence, we don’t always know.

We encourage patients’ families and friends to write in the diaries. They can write about anything, such as their own feelings, their hope that the patient will recover, the weather outside or something funny grandchildren did or said. Those small stories can help fill the gap of time that patients can lose during illness. It is also valuable to families of the critically ill whose world has been turned upside down. The diaries become a chronological record of what happened during the stay.

Families are often eager to tell stories and share memories from ICU stays. Studies show that relatives can also suffer post-traumatic stress disorder (PTSD) following ICU stays. Where possible, we try to show relatives and patients the actual place where patients spent most of their time at ICU. It is often more emotional for relatives than patients because of the memories it brings up.

As for staff, we try to write brief details on a daily basis, including progress in conditions and training with the physiotherapist. We also note any difficulties and whether patients’ conditions are deteriorating in any way.

The physiotherapist sees the patients every week day during their stay, and patients clearly remember her for literally putting them back on their feet. At the follow-up, various tests are carried out to monitor progress. Patients are often keen for tangible evidence of their progress during recovery, in addition to new goals and training schedules.

In conclusion, the diary is a very important resource to both patients and families. It can help patients recover lost time and increase their understanding of what happened to them during a period of critical illness.

Here are some photos from one of our diaries. It´s straightforward to use and is currently being updated. We also include a leaflet for relatives to describe what the patient likes to do when he or she is healthy, like sport, music, sleeping patterns (early bird or night owl). Things relatives would like us to know or what they think the patient would want us to know. 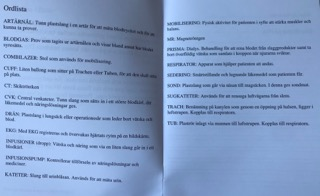 A glossary of words used in the ICU

Bright spots: music in the ICU

The intensive care unit (ICU) is a rather obscure place for many people. It is a place where you are exposed to the fragility... Read more

Patients, intensive care unit, Families, physiotherapists, ICU diaries I work in a small intensive care unit (ICU) where we have been writing diaries since 1992. Initially, they were just little black books with notes by staff and families on how patients were doing during their ICU stay.