The EVICURES project included research carried out by VTT Technical Research Centre of Finland Ltd on evidence-based design and user orientation. Hospital staff and patients were surveyed in order to gauge views on such issues as architecture, indoor conditions, durability, functionality, safety, accessibility and usability. 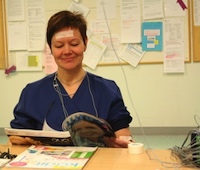 VTT evaluated the individual thermal sensation and comfort of both the staff and patients, using the Human Thermal Model tool to set new limits for ideal temperature. They were used in the heating ventilation and air-conditioning design, to adjust thermal conditions to the best level for staff and patient satisfaction. (Image at left shows Wired skin temperature measurement arrangement of a seated person at the Seinäjoki Central Hospital).

Seinäjoki University of Applied Sciences modelled a 3D virtual space. From this VTT developed a Unity3D game for computer and tablet, allowing the staff to move around virtually in the ICU facilities and to experience realistic interactive care situations in the new working area in advance. This helped in designing suitable facilities that support actual working practices and increase job satisfaction. In addition, the staff became familiar with their future work premises in the design phase.

"VTT produced the technical research data, which was combined with medical knowledge, practices and future visions contributed by the hospital. This enabled transforming theory into practice," said Kari Saarinen, Project Manager of the EVICURES project and Chief Physician at ICU, Hospital District of South Ostrobothnia.

“Operations will be more cost-efficient and of higher quality, when the equipment and nursing staff are concentrated into one place. We also expect the solution to have remarkable effects on patient healing," added Saarinen.

"A user-oriented approach was an essential foundation for the whole project. This way we can all together make the major change about to happen easier, when the nursing staff is moving from facilities for multiple patients to working alone in single rooms," says Tiina Yli-Karhu, Design Coordinator, Hospital District of South Ostrobothnia.

Computerised Order Entry (CPOE) Systems can improve the quality and safety of medication prescribing and reduce costs, according... Read more

Thoracic Ultrasound Vital in the ICU

Thoracic ultrasound (TUS) is vital for differential diagnosis in the ICU, and has many advantages, say the authors of a recently... Read more

French intensive care and nephrology societies have published recommendations for AKI in the perioperative period and in intensive... Read more

ICU, Design, Evidence, Virtual reality, VR, heating, thermal, Finland A new intensive and intermediate care unit at Seinäjoki Central Hospital in Finland is the result of extensive evidence-based design research and virtual modelling. The facility with 24 single patient rooms is due to become operational in 2018, and will b