Reijo Salonen, Orion's Senior Vice President, Pharmaceutical R&D and Reetta Kivelä, founder and CTO of Gold&Green Foods Ltd, have been selected as the CTOs of the Year 2017. The title CTO (Chief Technology Officer) of the year is awarded by The Finnish CTO Forum, a community for Chief Technology Officers, in cooperation with the technology and innovation centre Tekes and the Nordic leader in innovation consulting Spinverse. 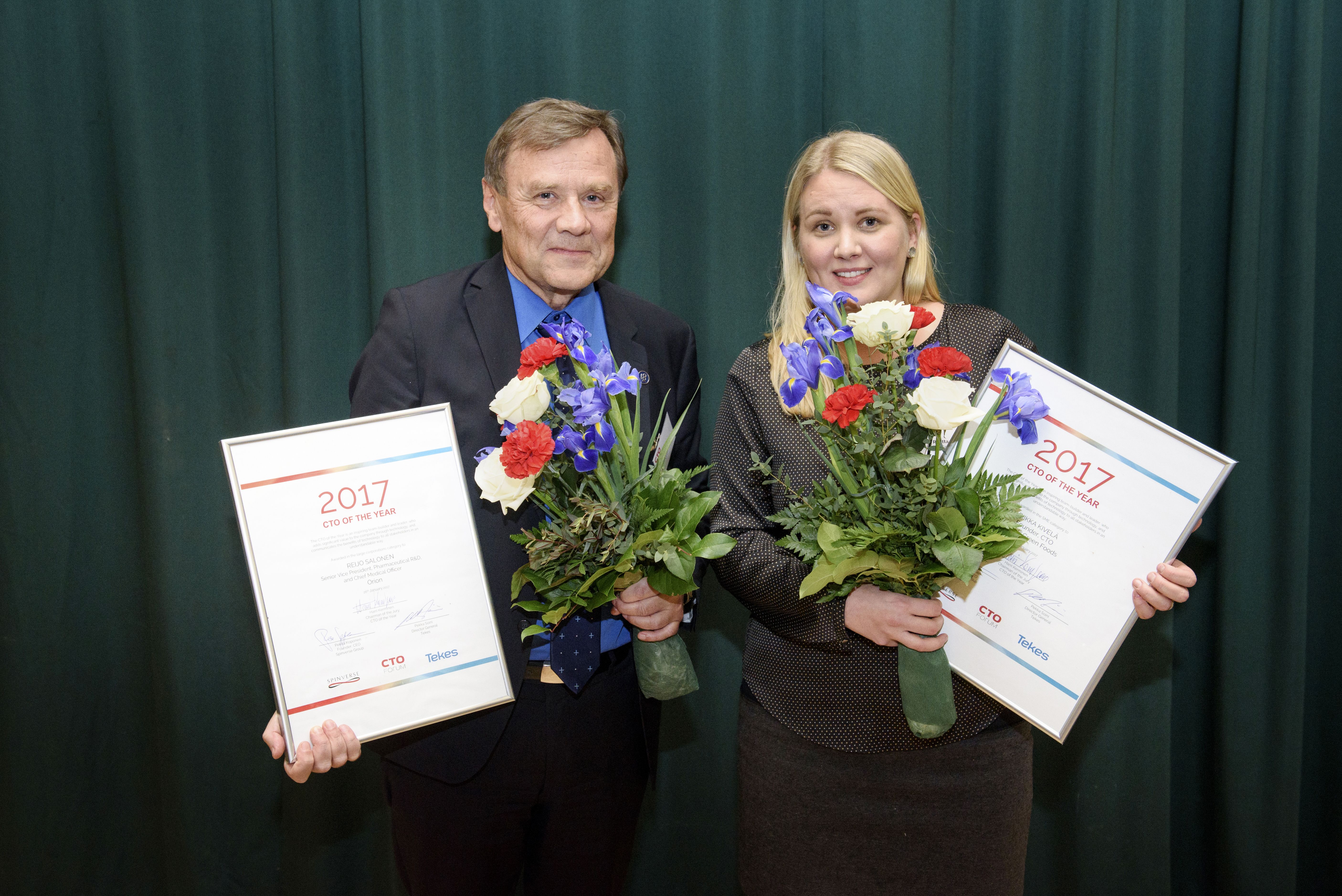 The CTO of the Year title is awarded annually to highlight Chief Technology Officers whose work has had an impact on their company's technology expertise and growth potential, and who are inspiring leaders and active in networks with an impact on society. The recipient is selected by a jury of Finland's technology leaders. This year the emphasis was on companies with considerable societal impact.

The title, which has been awarded since 2010, went to a major company and a SME. Orion was the jury's favourite among the major companies as it has had a significant impact on Finland's pharmaceutical R&D. Orion develops, manufactures and markets human and veterinary pharmaceuticals, active pharmaceutical ingredients and diagnostic tests, and is the clear market leader in Finland.

According to the CTO jury, Reijo Salonen was selected for his solid experience and extensive network, which have contributed to the positive development of Orion's business and results - not to mention the positive effects that new drugs provide to humankind.

"Ten years ago, the state of affairs in Orion's R&D work was challenging and the company was lagging behind international pharmaceutical industry giants. Under Salonen's leadership, Orion has renewed its R&D culture to make it open, transparent and enthusiastic about R&D. An organisational change created R&D that enables open innovation. While Orion's internal resources were being targeted precisely at the operations that provide the company its competitive advantage, it was possible to outsource the research and development work that focuses on other areas and carry it out as cooperation projects on a global scale. An extensive cooperation network increased Orion's resources and expertise. One example of the R&D department's achievements is a new kind of prostate cancer drug, which was also selected as one of the five finalists for the Chemical Industry Federation Innovation Award of 2016. Orion's aim is to launch this drug on the market in 2019," said the jury of the CTO Forum.

"This is wonderful recognition of what we have achieved together in the R&D organisation. We have worked hard to change the culture and we can now see the results in the development of innovative products. Over the past ten years we have been able to turn innovations into projects and partnerships, and it is wonderful that our development has been noticed more widely. Orion has a long and successful 100-year history. The robust R&D pipeline that we have created will enable us to be proud of our valuable company also in the future," says Salonen.

"Orion's financial and R&D performance have been beyond compare over the past ten years and Gold&Green Foods' products help to alleviate a major global challenge, in other words the environmental problems caused by meat production. According to the jury, the business activities of both companies combine important technological and social dimensions. Salonen and Kivelä have both proven their input to their companies and to societal networks," says Harri Kerminen, the chairman of the jury.

The Finnish CTO Forum is a community for Chief Technology Officers that provides a platform for innovation and technology leaders in different companies in Finland for networking, discussion and sharing ideas across different industries. The Forum's target is to increase appreciation and raise awareness of the work carried out by companies and Chief Technology Officers. The CTO Forum is implemented and the CTO of the Year title is awarded as a joint undertaking by Tekes and Spinverse.

«« Which Chest Pain Patients Can Safely be Removed from Monitors?


What is the Optimal Patient-Intensivist Ratio? »»