Regarding the growing number of patients with long-term mechanical assist devices, intensivists need to understand the physiology of the devices, their functioning, potential complications and their management.

Long-term mechanical circulatory support (MCS) is being used increasingly for patients at risk of dying from heart failure and cardiogenic shock (Ponikowski et al. 2016; Gustafsson and Rogers 2017). As a result, intensivists who do not have training in managing advanced heart failure patients are increasingly likely to encounter patients requiring MCS at various points in the trajectory of their disease, especially during subsequent admissions for complications (Pratt et al. 2014; DeVore et al. 2014). A basic understanding of ventricular assist device (VAD) physiology is essential for the safe and effective care of these patients. This review highlights the physiology of patients with MCS and management of common complications relevant to the critical care physicians.

MCS systems can be used to unload the failing ventricle and maintain sufficient end-organ perfusion. While heart transplantation (HT) is a highly effective therapy for advanced refractory heart failure (HF), it is limited to <10% of candidates, due to a severe shortage of donor organs and a variety of contraindications (Ponikowski et al. 2016; Aissaoui et al. 2018). This paucity of effective therapy promoted the development of VAD, which may be used as a) a bridge to HT or b) a long-term alternative to HT, also known as destination therapy.

Improvements in technology, especially the advent of smaller, durable continuous flow pumps, have led to the use of LVADs in a much broader population of patients in the last 10 years (Gustafsson and Rogers 2017). It is estimated that 2000 pumps are implanted annually in Europe. Compared with LVADs, TAH is implanted in a much smaller subset of patients (Cook et al. 2015; Torregrossa et al. 2014). Data from the most recent analysis from the LVAD registry show a one-year survival rate of 80% (Gustafsson and Rogers 2017). Concerning TAH patients, the most recent multicentre studies reported a one-year survival rate between 56% to 76% (Cook et al. 2015; Torregrossa et al. 2014).

Device physiology: what should intensivists know?

Management of these patients requires an understanding of the principles, indications and limitations of this unique technology. Pump flow is the blood flow displayed on the LVAD monitor and calculated based on measured pump power and set pump speed. The device flow is directly proportional to the pump speed and inversely related to the LV intracavitary pressure, i.e. the difference of pressure in the inflow and outflow cannulas (Figure 2). Any change in pump function or in patient condition may lead to significant changes in pump flow.

Pump power is a direct measurement of watts required by the device to pump blood at the set RPM. It may be affected by LVAD obstruction.

The Pulsatility index corresponds to the magnitude of flow pulse through the pump. It fluctuates with changes in volume status and with heart contractility (Heartmate II and 3).

For patients with severe biventricular failure and/or valvular mechanical prosthesis, a TAH may be an option (Cook et al. 2015; Torregrossa et al. 2014). TAHs replace all functions of the native heart. The most used TAH is the CardioWest TAH consisting of two polyurethane ventricles (Figure 3). The newest CARMAT TAH, an implantable electro-hydraulically actuated pulsatile biventricular pump will probably replace the CardioWest TAH in the future (Latrémouille et al. 2018). The CardioWest device is typically set to partially fill and runs at a fixed percentage of systole and a fixed beat rate of 120 to130 bpm with a stroke volume of 50–60 mL (Cook et al. 2015; Torregrossa et al. 2014). The clinician can modify several parameters to optimise cardiac output: beat rate, drive pressure, percentage of time in systole, and vacuum pressure. Depending on exercise or volume status, the cardiac output may automatically increase in response to an increase in venous return and preload such as in a normal heart. 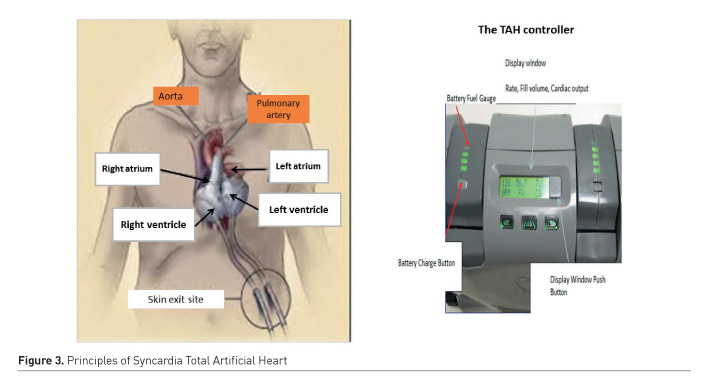 Which medication and specific care are required in VAD patients?

Medications of advanced HF. Despite the lack of evidence and in order to favour weaning, the guidelines used for patients under MCS are those used for heart failure patients (Gustaffson and Rogers 2017). Specifically, and according to the most recent International Society of Heart and Lung Transplant (ISHLT) guidelines, mean blood pressure (BP) should be lower or equal to 80 mm Hg with a typical goal range between 70 and 80 mmHg to prevent stroke and LVAD dysfunction due to increased afterload (Estep et al. 2017).

Driveline. The most important factor in preventing the morbidity of infections is anchoring the device to help stabilise the driveline, thus minimising trauma and tension at the exit site (Gustafsson and Rogers 2017; Pratt et al. 2014; Sen et al. 2016; DeVore et al. 2014). The patient follows a sterile dressing care regimen in accordance with protocol and has to monitor the driveline exit site for redness, drainage, tenderness and open areas at the site.

Why do patients with LVAD come into the ICU?

Bleeding is the most frequent adverse event in MCS due to combination anticoagulation and acquired von Willebrand disease due to the sheer stresses in the pump (Suarez et al. 2011). Bleeding events (after one month from VAD implantation) are epistaxis, gastrointestinal bleeding, intracranial haemorrhage and mediastinal and thoracic bleeding.

Infection is the second most common cause of death after cardiac failure in MCS patients (Estep et al. 2015; Feldman et al. 2013). The driveline exit sites need special attention. An infection can develop and ascend up to the device. LVAD-specific infections are located on the driveline or pump pocket (Kusne et al. 2017). They need aggressive treatment by including blood culture: blood cultures, antibiotics, surgical debridement, and even HT (Kusne et al. 2017).

Cardiac arrest. Consequences of cardiac arrest on pump function highly depend on cardiac rest function. While some patients will collapse immediately, others may even be able to exercise. The impact of ventricular arrhythmia is also variable, sometimes creating some kind of Fontan circulation, with a sufficient output flow. In general, LVAD patients in cardiac arrest who are collapsing should be managed according to the Advanced Cardiac Life Support (ACLS) recommendations, with some precautions (Hazinski et al. 2015; Nolan et al 2015).

Patients with device stoppage can present in severe cardiogenic shock or full arrest and should be managed appropriately while searching for the cause of malfunction. In these cases, the VAD coordinator should be contacted immediately and all of the VAD equipment should be assessed to verify that critical connections are intact. The driveline and power supply should be checked and reconnected if disconnected (Pratt et al. 2014; Sen et al. 2016; DeVore et al. 2014). Alarms should be assessed. If there is a VAD hum, it should be assessed with auscultation. Doppler ultrasonography should be used to evaluate the patient’s BP and echocardiography to assess some haemodynamic parameters and look for VAD complications.

Once restarted, a major concern is thromboembolism from the device. Device exchange can be performed emergently if necessary and feasible.

Electrical activity without cardiac contractility should prompt a search for underlying causes, such as tension pneumothorax and electrolyte derangements.

Noncardiac surgery. Noncardiac surgery presents an increased risk of morbidity due to bleeding (Pratt et al. 2014; Sen et al. 2016; DeVore et al. 2014). However, it can be performed if a VAD coordinator or nurse familiar with the management of the device accompanies patients in the operating room to manage the console, monitor LVAD flow and address any alarms. If emergency surgery at a centre without VAD support is necessary, care providers should call the manufacturer or nearest hospital with a VAD programme to obtain advice and recommendations on management of the device. Intra-abdominal procedures must proceed with extreme caution to avoid encountering the subcutaneously tunnelled driveline. Ultrasound can be used to mark the driveline’s location. No protocols exist for managing anticoagulation in the perioperative period, and a variety of approaches have been used.

Suction events. A suction event occurs when there is reduced filling of the pump (reduced preload), which increases negative pressure within the LV. During this event, part of the LV wall is sucked over and covers the pump’s inlet cannula, generating an alarm and a decrease of speed to release the suction. Suction events are caused by low volume, RV failure or tamponade. Suction events can lead to low LVAD flows and can trigger ventricular arrhythmias. The management includes decreasing the RPM rate and administering fluid.

Echocardiography. Echocardiography is fundamental in the management of LVAD patients but should be interpreted with knowledge of the patient’s clinical status (Stainback et al. 2015).

It is useful to assess haemodynamic parameters:


Bedside echocardiography can also detect and/or diagnose LVAD complications. It is useful in TAH patients.

Advisory alarms. Table 1 reports the main alarms to look out for and to manage.

The red hazard alarm can indicate disconnection of driveline from the controller, low flow or incorrect operation, and so the connections need to be checked. It may also suggest hypovolaemia, bleeding, tamponade, RV failure, hypertension, or cannula obstruction. In these cases, both the patient and the device should be assessed emergently.

The yellow system driver signals low cell voltage. When this occurs, the cell battery should be replaced and a system controller self-test performed. The green advisory alarm signals a power cable disconnection; the power symbol and battery power bars flash. Cable connections to the power source should be checked and power leads should be assessed for damage and replaced if necessary. 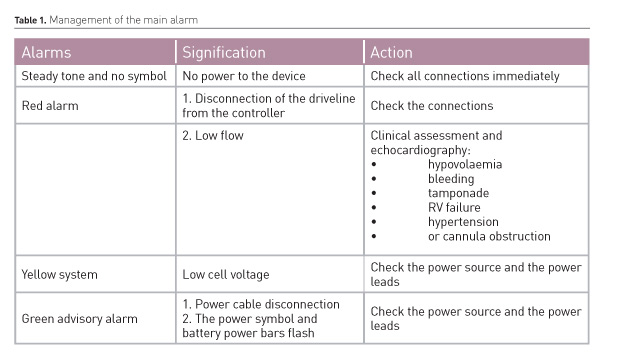 Nadia Aissaoui declares receipt of Medtronic grant for congress participation. All other authors declare that they have no conflict of interest.

Stainback RF et al. (2015) Echocardiography in the Management of Patients with Left Ventricular Assist Devices: Recommendations from the American Society of Echocardiography. J Am Soc Echocardiogr, 28: 853-909.

Establishing a relationship of trust and care

The chaplain is a resource of ethically competent support and a compassionate caring presence for patients, families and ICU... Read more

We can do better! Élie Azoulay, MD, PhD, is Professor of Medicine in Specialty Pulmonary Medicine and Critical Care at Saint... Read more

LVAD, artificial hearts, left ventricular assist device Regarding the growing number of patients with long-term mechanical assist devices, intensivists need to understand the physiology of the devices, their functioning, potential complications and their management.