School of Anesthesia and Intensive Care - University of Pisa Italy

Share
Download Article Back
“The success of intensive care has not to be measured only by survival statistics, as though each death is a medical failure. It has to be measured by the quality of lives preserved or restored and by the quality of dying of those in whose interest is to die.” This statement of G. R. Dunstan, Prof. of Morals and Social Theology, dating back to 1995, represents a warning to all intensivists. Since then, the importance of the quality of life and the cognitive, psychological and physical impairments that intensive care unit (ICU) survivors may experience has been increasingly stressed by the literature. Therefore, it is essential for all intensivists to be aware not only of the long-term sequelae of critical illnesses and their treatments, but also of the organisational changes and improvements that can be implemented to improve quality of life of the ICU survivors and their families after discharge.

There is more to life than measuring death.

At first, there was only survival or death. Critical care is a relatively new branch of medicine that emerged in the 1950s during the large polio epidemic in Northern Europe. For decades, the primary objective of intensive care was to save as many lives as possible, regardless of the severe disabilities that could ensue and then weigh on the residual life of the patients. In the 1970s, though, critical care outcomes after ICU discharge have increasingly reported. Particularly significant is a 1976 article ("Survival, hospitalisation costs, and follow-up results in critically ill patients") published in NEJM (Cullen et al. 1976) about 1-year follow-up outcomes of ICU survivors. The article described a novel approach to treatment in ICU, more focused also on post ICU outcomes. In this study on 226 critically ill survivors, the one-year mortality rate was as high as 73%. Moreover, only 42% of the one-year survivors had the same functional level as before, while 16% had a partial recovery and were in a nursing home. Cullen et al. (1976) also demonstrated, as expected, a profound negative effect of age (≥65 years) on survival and long-term cognitive decline. It is noteworthy that this first comprehensive analysis on outcomes related to post-discharge items revealed many problems that ICU survivors still have to deal with today (Cullen et al. 1976). Since then, our awareness on long-term sequelae increased and in the 2012 the concept of post intensive care syndrome (PICS) was established to indicate the overall chronic disabilities that plague ICU survivors and their caregivers (PICS-Family) (Rawal et al. 2017).

Current evidence shows that this syndrome can affect up to 50% of patients discharged from ICU. Cognitive impairments of different grade of severity and duration occur in up to 30-80% of ICU survivors (Harvey and Davidson 2016; Pandharipande et al. 2013). Psychiatric disorders, such as anxiety, depression, or post-traumatic stress disorder (PTSD) often lasting for years can occur in 8-57% of patients (Harvey and Davidson 2016). A new physical disability can also be developed by 25-80% of patients (Griffiths et al. 2013), and new symptoms such as dyspnoea, pain, sexual dysfunction, or impaired exercise tolerance may be experienced as well. 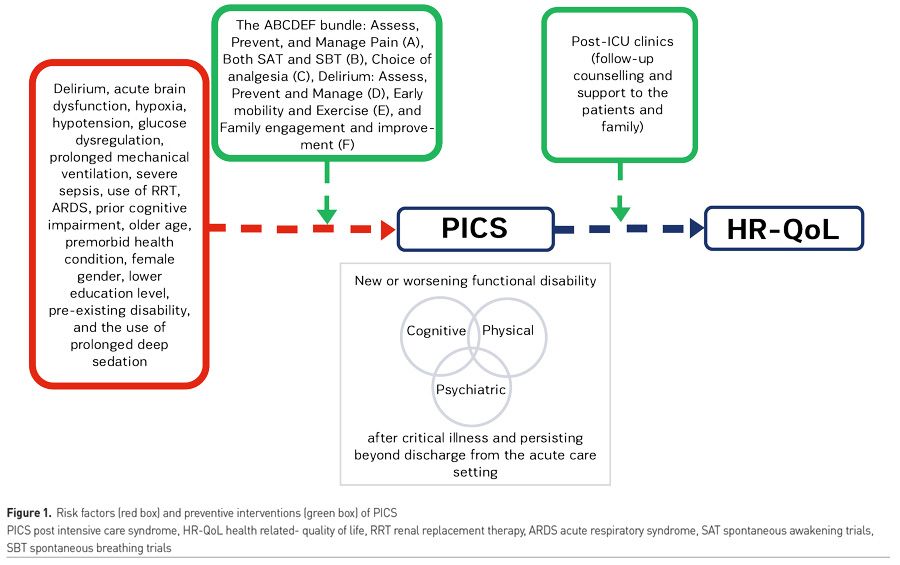 Even though a growing number of reports on PICS occurrence and epidemiology are available, the risk factors and biologic mechanisms involved and the applicable preventive and treatment strategies have yet to be completely clarified.

In daily clinical practice, preservation of health-related quality of life (HRQoL) must be routinely pursued. With this aim a bundle of intervention has been elaborated:

The ABCDE is the bundle for sedation, delirium, and immobility management in ICU patients. ABCDE is composed of:

A: Airway management, assessment, prevention, and management of pain;

C: Choice of analgesia and sedation, coordination of care, and communication;

The ABCDE bundle has been recently complemented with FGH for PICS prevention. FGH includes:

The Post-ICU management: a new target for the intensivist.

Despite efforts in identifying risk factors and implementing prevention strategies, PICS remains underdiagnosed mainly due to:

•Lack of universally validated tools for PICS screening and diagnosis

While some categories of patients, e.g., stroke survivors or Chronic Obstructive Pulmonary Disease (COPD) patients, usually fall under a structured programme of rehabilitation because of their chronic diseases, ICU survivors suffering from PICS are not recognised as 'chronically ill’ and often do not have follow-up schemes.

Van der Schaaf et al. (2015) underlines that the optimal timing of first visit after ICU discharge are lacking in the literature (between 1 to 12 months after discharge). However, a panel of Dutch experts has suggested that the optimal timing is about 12 weeks after hospital discharge (Van Der Schaaf 2015). This period of time seems long enough to rule out all ICU survivors who face early hospital readmission or death. It also appears to be an adequate time period for any physical, cognitive, and psychological sequelae to emerge and be noticed by family members or caregivers and, therefore, be reported at the follow-up consultation as significant impairment for quality of life. 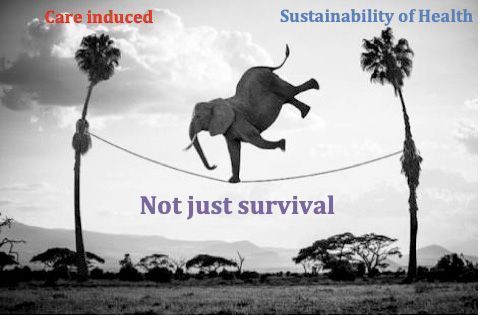 With reference to the duration of the follow up, some studies suggest up to 10 months after discharge for those patients who report sequelae related to ICU admission disease and up to 1 year for family members or caregivers who develop psychological repercussions from their family member’s experience (Griffiths et al. 2013).

Based on global literature data, the follow-up schemes could be structured as follows:

• One-year last follow-up visit for those who had shown PICS symptoms at the first visit.

Moreover, the first follow-up visit represents an early opportunity to identify any physical, psychological, and/or cognitive deficits. Hence, the need to create a post-intensive support network, including physiotherapists, psychologists, psychiatrists, and others, to guarantee continuous assistance to post-critical patients.

PICS is gaining more and more importance as a consequence of COVID-19 pandemic, both because of the elevated number of ICU survivors and because of the significant likelihood that COVID-19 ICU patients will evidence a greater incidence of PICS. In fact, the long sedation that these patients require to allow mechanical ventilation is a risk factor for delirium, which is closely related to cognitive impairment. Additionally, due to infection control bundles, family members are restricted from in-person visiting and even health care staff may reduce the time they spend in contact with patients. This reduction in human interaction causes a decrease in cognitive stimulation, reorientation and reassurance to patients, causing further anxiety, depression and demoralisation. This creates a vicious circle of mental health impairment (Hosey et al. 2020). Considering the crucial role of evaluating COVID-19 long-term effects, technological advances should be leveraged to facilitate remote follow-up and comply with social distancing measures (Warnakulasuriya et al. 2020).

PICS is a widespread but under-recognised syndrome that can involve up to 80% of patients surviving acute respiratory failure who have received mechanical ventilation in ICU. Therefore, especially during this COVID-19 pandemic, it is of utmost importance for intensivists to implement evidence-based interventions (ABCDE) and to establish rehabilitation programmes that begin in ICU and continue after discharge. These actions can optimise survivorship experience and minimise long-lasting physical, cognitive and mental health impairments which cause profoundly disabling functional problems such as persistent fatigue, chronic pain, sleep dysfunction and overall low health- related quality of life.

“If you do not know what you are doing and how well you are doing it, you have no right to be doing it at all,"Professor Sir Bruce Keogh, NHS Medical Director

Kim IY, Schutzler S, Schrader A et al. The anabolic response to a meal containing different amounts of protein is not limited by the maximal stimulation of protein synthesis in healthy young adults. Am. J. Physiol. Endocrinol. Metab. 2016; 310: E73–80.

Nutrition in the Post ICU Period: Where is the Evidence?

This article summarises the current nutrition evidence in the phase of recovery that occurs following critical illness.... Read more

N umerous patients are admitted to the Intensive Care Unit (ICU) every year. Many of these critically ill patients receive... Read more

Continuous Monitoring Beyond the ICU - The Rise of Mobile Solutions

Post-ICU patients are at high-risk of clinical deterioration. Continuous and mobile monitoring on hospital wards is useful... Read more