State of Intensive Care in Turkey

The history of intensive care (IC) in Turkey has followed a somewhat similar pattern to other European countries (see Figure 1). The first intensive care unit (ICU) was founded in a state hospital in Istanbul in 1959. The first attempts to institute intensive care in several cities were performed almost exclusively by anaesthesiologists. In 1977 those pioneer anaesthesiologists attended their first international meeting of Intensive Care Medicine (ICM) in Paris. With the influence of this meeting, the Turkish Society of Intensive Care (TSIC) was founded in 1978.

Although the pioneers of ICM were anaesthesiologists, the founding committee members of the society were all from different specialties (surgeons, internists, pulmonologists, neurosurgeons and cardiac surgeons). Yet the interest of other disciplines was minimal until recent years. As a consequence, ICM remained almost as a “subspecialty” of anaesthesiology. As a result, TSIC and the Turkish Society of Anesthesiology and Reanimation (TSAR) played a crucial role in the clinical and administrative development and the scientific progress in representing ICM. Today the majority of intensivists are anaesthesiologists. The changes in administrative structure and the renewal of the requirements for the intensive care supraspecialty have caused big discussions among primary specialties (see Hot Topics in Intensive Care in Turkey, page 46).

The Ministry of Health (MoH) is the main health service provider in Turkey; universities and private sectors have a complex connection with the MoH on which they are financially dependent. In recent years, there has been a radical change in the Turkish healthcare system, the so-called “Health Transformation Programme” (HTP). One of the first steps of HTP was the unification of several former “state insurance programmes” under a single umbrella, named “General Health Insurance” (GHI). Family medicine was supported, popularised, and organised with a computerised system. A stepwise system from primary to tertiary levels of health care centres and hospitals was introduced. However, this did not prevent over admission to the university hospitals.

The reimbursement of health services is organised generally around several “packages”, with only a few exceptions. A performance-based supplementary payment system was also initiated for physicians. This system has advantages and disadvantages, and has been discussed and criticised in equal measures since its introduction. The most important drawback of this system concerning the ICU is that the reimbursements of ICUs are performed almost exclusively in “package programmes”; as a result, hospital managements rearrange their ICU policies according to these programmes (which are not necessarily parallel with medical obligations). The majority of private hospitals are also connected to GHI and therefore to the MoH.

In Turkey there are approximately 27,000 intensive care beds (adult, paediatric and newborn), of which 12,661 are in tertiary level ICUs, meaning that they are capable of treating severe critical illness with multiple organ dysfunctions (see Table 1, and Figure 2). The intensity of ICU in Turkey is shown in Figure 3. In Table 1, the numbers of beds are listed. Most of the ICUs are working in a closed system with a director.

Graduates of medical faculties have to pass a central examination to become a specialist. Residency training lasts for five years; during training in anaesthesia, one year of rotation is obligatory in the ICU according to recent regulations. Obligatory rotation periods in other main specialties were not strictly specified. According to the new constitution of the specialisation programme in medicine, intensive care becomes a supraspecialty for anaesthesiology, pulmonology, general surgery, internal medicine, neurology and infectious diseases where training lasts three years. Anaesthesia has been recognised as the main discipline for the supraspecialty training. The base programme of the training is defined by the MoH and the Scientific Committee as consistent with the Competency Based Training programme in Intensive Care Medicine for Europe (CoBaTrIce). The details of the programme are determined by the protocols of the different disciplines within each centre.

Since 2012 specialists need to have a good mark on a central examination to start the supraspecialty in intensive care medicine (ICM). There are 27 University Hospitals and 4 MoH Research Hospitals that have education programmes for the ICM supraspecialty. After acceptance of the new regulation, several doctors from six base specialities, who have been working at intensive care units for at least five years applied to the MoH to get the intensivist certificate. Only 208 intensivists, 166 of whom are anaesthesiologists, received this certificate. After objections and court decisions, approximately 225 certificated intensivists exist in Turkey, and the main specialty of 180 certificated intensivist is anaesthesiology.

Since its foundation, TSIC has organised several scientific activities:

1. Congress: From the beginning the Society co-organised its congress within the Turkish Anesthesia and Reanimation Congresses; in 1997 it was held as a separate National Intensive Care Congress. Since then, the 17th congress has been organised for 2014 with more than 650 attendees. The congress is a biennial event of 3-4 days duration.

2. International Intensive Care Symposium: this is also a biennial event (alternating with the national congress), and the 19th was organised in 2013. For the global masters of ICM, the meeting in Istanbul has become a tradition.

3. Courses in different topics of ICM, such as Mechanical Ventilation, Sedation- Analgesia in ICU, Renal Replacement etc. (Each topic is organised 3-4 times a year in different cities of the country as weekend courses). To date, 16 courses on mechanical ventilation have been given.

4. Co-organisations with “sister” societies: Panels in congresses of TSAR, the Society of Cardiovascular and Thoracic Anesthesia and Intensive Care, Society of Nutrition, Society of Resuscitation, etc. 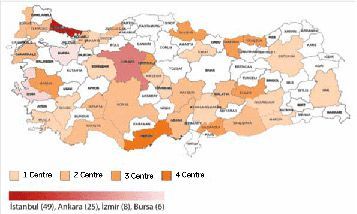 Turkish delegates to the national council of the European Society of Intensive Care Medicine (ESICM) have been elected from the TSIC members since the institution of this council.

Turkish intensivists are invited to give lectures in international meetings such as ESICM, ISICEM, in several countries, intensive care societies, and meetings, etc.

Since 2005 Turkey has also been a centre for the second phase of the EDIC examination, a popular choice for candidates, especially from Asian countries. The first EDIC diploma awarded to a Turkish intensivist was in 2003; since then, further intensivists (all from anaesthetic origin) have passed the EDIC-examination. TSIC publishes its official journal (Journal of the Turkish Society of Intensive Care) every three months. This journal is principally dedicated to reviews and educational aspects; however, studies have also recently been published in this journal; attempts to join the international indexes continue.

In conclusion, TSIC has represented and will represent the intensive care community in Turkey. There are many problems to be solved, such as shortage of nurses, reimbursements of ICUs, educational issues, etc. We think that the Turkish Society of Intensive Care will represent intensive care to a better place in the national and international arena.

«« Aspirin Use In Surgery Does Not Reduce Kidney Infection


The history of intensive care (IC) in Turkey has followed a somewhat similar pattern to other European countries (see Figure 1). The first intensive care...