Editorial Board Member since 2009

Obese patients without other major co-morbidities are categorised as class II according to the American Society of Anesthesiologists (ASA) physical status classification (https://iii.hm/38j). If additional organ dysfunction is present they are categorised as ASA III. These patients are at increased risk for metabolic, cardiovascular and pulmonary complications. Postoperative pulmonary complications (PPCs), including atelectasis, respiratory failure and pneumonia are not uncommon conditions, and can develop in as much as 40% of high risk patients. Obesity affects the respiratory mechanics, causing a restrictive pattern due to adiposity, compromising both chest wall and lung compliance. The lung volume is decreased in obese patients, predominantly due to a reduction of functional residual capacity (FRC) (Bluth et al. 2016).

Regardless of the direct mechanical effect of obesity, the co-morbidities of obesity, i.e. obstructive sleep apnoea (OSA), obesity hypoventilation syndrome (OHS), pulmonary hypertension and difficult-to-control asthma may further cause deterioration of lung function (Bluth et al. 2016; Fernandez-Bustamante et al. 2015). These patients need to be carefully screened at the preoperative anaesthesiology visit. Peripheral oxygen saturation (SpO2) should be always measured, while forced vital capacity and cardiopulmonary exercise testing should be performed in selected patients in order to identify high-risk subjects.

The prevalence of OSA is high in obese patients, and has been reported to be above 70% in patients scheduled for bariatric surgery (Fritscher et al. 2007). In obese patients, sleep apnoea is caused by upper airway collapsibility, and results in intermittent hypoxia and fragmented sleep (Chung et al. 2016). During the perioperative period, sedation and anaesthetic agents, especially neuromuscular blocking agents, opiates and benzodiazepines, facilitate the upper airway collapse and impair ventilatory status or arousal response. OSA increases the risk of postoperative hypoxaemia, ICU admission and increases hospital length of stay. The most relevant episodes of hypoxaemia are usually observed during the rapid eye movement (REM) sleep phase, due to unstable airway and muscle hypotonia; therefore this phase is a period at particularly high risk during the postoperative phase. As a result of the stress and inflammatory response, REM sleep episodes significantly reduce during postoperative nights 1 or 2. On the other hand, the REM sleep rebound occurs during recovery nights 3 to 5 (Vasu et al. 2012). The gold standard for the diagnosis of OSA is polysomnography, an expensive and time-consuming exam: it is not done routinely and this fact may lead to a high incidence of undiagnosed OSA in surgical patients. The STOP-BANG score assesses several parameters including snoring, tiredness, observed blood pressure, body mass index, age, neck circumference and gender and is a sensitive tool for predicting the diagnosis of moderate to severe OSA (Bluth et al. 2016). Not only OSA but also obesity hypoventilation syndrome (OHS) is associated with higher incidence of postoperative pulmonary complications. OHS is characterised by daytime hypercapnia in obese patients, and may be concomitant with chronic obstructive airway disease.

Obesity is a risk factor for asthma, is associated with the severity of the disease and often has a poor response to glucocorticoids. Chest wall fat accumulation leads to a reduction of lung volume, distal airway collapse with increase of closing capacity and reduced functional residual capacity. The incidence of perioperative bronchospasm is high, and should be taken into account.

Airway management in obese patients can be challenging. Several studies have identified independent risk factors associated with difficult mask ventilation in obesity, including male gender, higher neck circumference, limited mandible protrusion, Mallampati score III or IV, OSA and reduced mobility of the cervical spine (Leoni et al. 2014). As a result of the decrease in FRC and expiratory reserve volume, the simple fact of placing the patient in supine position may cause a rapid deoxygenation. Pre-oxygenation should be ideally performed in the head-up (reverse Trendelenburg), ramped or sitting position in order to limit the decrease in FRC and improve laryngoscopic view (Hodgson et al. 2015). A tight-fitting face mask is essential to ensure optimal pre-oxygenation.

The anaesthetic drugs should be titrated according to clinical effects. Dosing of several drugs should be based on lean body weight. The use of lipophilic drugs characterised by a rapid redistribution to adipose tissue compartments may lower the overall risk for accidental awareness (Bluth et al. 2016).

In obesity the airway pressure measured by the ventilator does not reflect the real stress and strain of lung tissue. In fact the decrease of compliance in obese patients with healthy lungs results from an increase in the chest wall elastance. An increase of BMI has a negative correlation with lung volume and lung compliance during general anaesthesia. These patients trend to have an increased incidence of intraoperative and postoperative atelectasis. Moreover an increase in intra-abdominal pressure causes an increase of chest wall elastance. Severely obese patients under mechanical ventilation are more likely to develop ventilatorinduced lung injury and acute respiratory distress syndrome (ARDS) than non-obese patients. Obesity is undoubtedly a risk factor for receiving improperly high tidal volumes that should rather be titrated according to the predicted body weight (Fernandez-Bustamante et al. 2015; Serpa Neto et al. 2014). A recent meta-analysis demonstrated that a low tidal volume ventilation with 6-8 ml/kg predicted body weight with low to moderate levels of positive end-expiratory pressure (PEEP), with or without recruitment manoeuvres, can prevent postoperative pulmonary complications in nonobese patients undergoing surgery (Serpa Neto et al. 2015).

The application of PEEP causes stabilisation of the alveoli, maintaining the patency of respiratory units and counteracting the airflow limitation and auto-PEEP (Fernandez-Bustamante et al. 2015). In morbidly obese patients with OSA undergoing bariatric surgery, the use of continuous positive airway pressure (CPAP) before the induction of anaesthesia, intraoperative PEEP plus recruitment manoeuvres and postoperative CPAP for at least 8 hours showed an improvement of respiratory function compared to conventional ventilation (Neligan et al. 2009). A combination of pre-oxygenation with noninvasive positive pressure ventilation (NIPPV) and recruitment manoeuvres after intubation showed an improvement of oxygenation and end-expiratory lung volume during anaesthesia compared with either oxygen or NIPPV alone in morbidly obese patients (Futier et al. 2011).

In obese patients with BMI above than 30 kg/m2, a meta-analysis showed that an intraoperative ventilation strategy with recruitment manoeuvres with PEEP improved intraoperative oxygenation and compliance compared with PEEP alone (Aldenkortt et al. 2012). In patients without obesity, The Protective Ventilation using High versus Low positive endexpiratory pressure (PROVHILO) trial has investigated the effect of the open lung strategy with high PEEP and recruitment manoeuvres in short-term mechanical ventilation against PPCs. The authors demonstrated that high level of PEEP and recruitment manoeuvre does not reduce PPCs (Hemmes et al. 2014). Protective Ventilation with Higher versus Lower PEEP during General Anesthesia for Surgery in Obese Patients (PROBESE), NCT02358512, is an ongoing randomised trial aimed at investigating the effect of higher PEEP levels and recruitment maneuvres compared with low PEEP levels on PPCs in patients at intermediate-to-high risk for PPCs (clinicaltrials. gov/ct2/show/NCT02148692). Pressure control ventilation (PCV) is often preferred to volume control ventilation (VCV), although clear benefits have not been demonstrated. Further studies are warranted to investigate the role of ventilator modes, namely PCV, VCV and other ventilator modes, including pressurecontrolled ventilation volume-guaranteed in perioperative obese patients in terms of avoidance of either barotrauma or volutrauma (Dion et al. 2014). The high driving pressure during the intraoperative period and an increase in the level of PEEP that caused an increase in driving pressure are associated with more PPCs. The monitoring of driving pressure and the transpulmonary pressure with the application of an oesophageal balloon should be considered to titrate PEEP and adjust ventilator setting (Pelosi et al. 1998; Pelosi et al. 1999; Pelosi and Vargas 2012; Neto et al. 2016).

The intraoperative use of high inspiratory oxygen fraction might decrease the surgical site infection rate, but it might be associated with resorption atelectasis formation, potentially leading to PPCs. However, a recent randomised controlled trial failed to show differences in infection rates and PPCs between patients ventilated with 80% or 30% oxygen during and for 2 hours after surgery (Staehr et al. 2011).

The application of CPAP immediately after surgery can maintain lung function in patients after laparoscopic bariatric surgery (Neligan et al. 2009). Perioperative CPAP application is recommended in patients at risk for OSA (Chung et al. 2016). Respiratory physiotherapy, rehabilitation including coughing, deep breathing and early mobilisation should be initiated to reduce the incidence of PPCs. Practical recommendations for perioperative respiratory management in obese patients are summarised in Table 1. 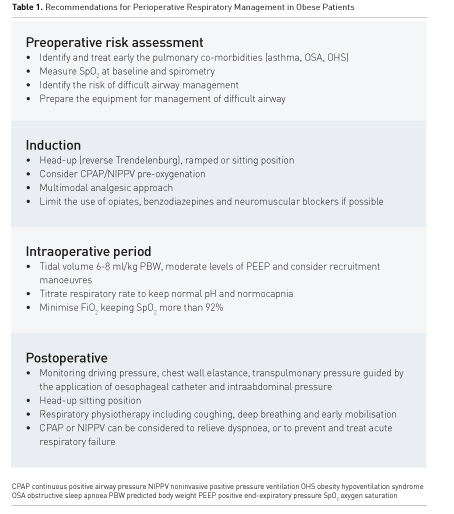 Obese patients present specific physiologic abnormalities challenging physicians during the perioperative period. A multimodal anaesthesia and analgesia approach and protocols for perioperative care should be implemented in order to reduce pulmonary complications and improve outcome. Lung protective ventilation with low tidal volume, adequate level of PEEP and appropriate use of oxygen concentration is recommended. Multidisciplinary teams including surgeons, anaesthesiologists and sleep and pulmonary physicians must cooperate to achieve optimal management of obese surgical patients.

Bringing new technologies to anaesthesia: are we there yet?

Maxime Cannesson, MD, PhD, is Professor of Anesthesiology and Vice Chair for Perioperative Medicine at UCLA. He is the Technology,... Read more

A Public Health Threat That Should Be Routinely Included Within Care Quality and Patient Safety Programmes This paper provides... Read more