Liver support in the intensive care unit: mechanism of action and science 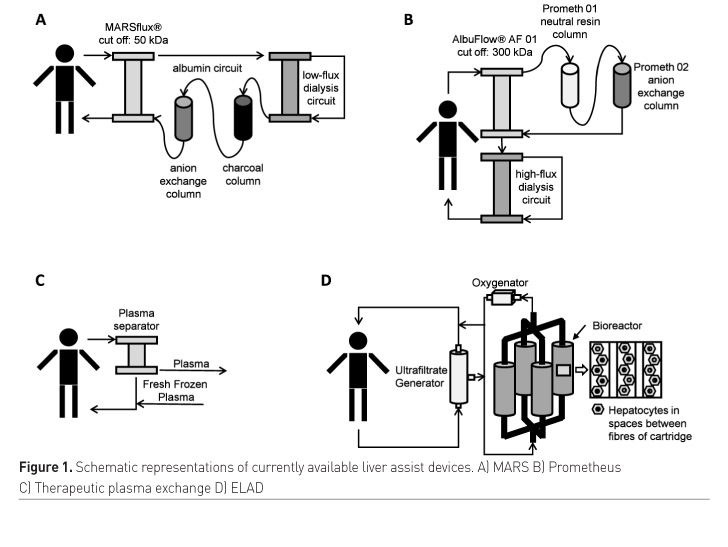 Plasma separation from blood is achieved by passage of blood across an approximately 300 kDa cut-off membrane. Plasma is cleansed by direct passage through two cartridges containing different adsorbents. Plasma is then returned to the blood circuit for clearance of water-soluble substances by a high-flux dialyser. A modification of this device, which excludes the high flux dialyser, known as double plasma molecular absorption system (DPMAS, Fresenius Medical Care) is also under investigation, as a plasma-sparing alternative to TPE (Wan et al. 2017).
There are few controlled studies of Prometheus® in liver failure (Rifai et al. 2003; Laleman et al. 2006). The largest RCT included 145 ACLF patients (n=77 vs 68 SMT) and demonstrated no survival advantage at 28 days (66% vs 63% in the SMT group, p = 0.70) (Kribben et al. 2012). A retrospective case series of 23 ALF patients supports a potential role for Prometheus® as a bridge to transplantation or recovery (Senturk et al. 2010), but further data are needed for validation before any recommendation.

Therapeutic plasma exchange (TPE) requires use of an extracorporeal blood cell separator for removal of plasma from blood. Patient plasma is then discarded, whilst blood cells are mixed with a replacement fluid and returned to the patient. Fresh frozen plasma (FFP) is the typical replacement fluid, but HSA has also been reported. TPE aims to achieve removal of toxins plus harmful inflammatory mediators and replacement of beneficial plasma proteins normally synthesised by the liver.
There have been no RCTs of TPE in ACLF, but evidence from prospective studies supports evidence for an improvement in Model for End-Stage Liver Disease (MELD) score and survival (Yue-Men et al. 2016; Ling et al. 2012; Zhou et al. 2015). Early case series of TPE improving outcomes in ALF (Nakamura et al. 2000; Kondrup et al. 1992; Larsen et al. 1995) have been supported by a multicentre RCT of high-volume plasma exchange (HVP) (15% of body weight [8-12L FFP]), which included 182 patients (92 HVP vs 90 SMT), and showed an improved hospital survival; 58.7% versus 47.8% (SMT) hazard ratio (HR) 0.56; 95% CI 0.36-0.86; p = 0.0083) (Larsen et al. 2016). In those patients that did not receive emergency liver transplantation, HVP improved survival compared to SMT (p=0.03), but in those who received a transplant prior use of HVP did not improve outcome compared to SMT (Larsen et al. 2016).

The rationale of bioartificial devices is to augment any residual liver function and support the failing liver by incorporating functional hepatocytes in combination with blood detoxification or additional mechanisms to attenuate liver injury.

ADVOS® detoxifies blood by albumin dialysis against a 2% albumin dialysate (Al-Chalabi et al. 2013). The albumin dialysate is recirculated via the ADVOS circuit, which contains two parallel conventional haemofilters, in which albumin-bound toxins are released through exposure to an alkaline or acid environment and subsequently removed by filtration. This design aims to maintain clearances of protein bound toxins through the treatment period (Al-Chalabi et al. 2013). In a pig liver failure model ADVOS® resulted in improvement in survival, cerebral perfusion pressure, haemodynamic status and kidney function (Al-Chalabi et al. 2013; 2017). A retrospective report of the first fourteen patients treated with ADVOS (mean treatment session 575 minutes) showed that there was significant reduction in serum bilirubin and creatinine (Huber et al. 2017).

Li-ALS combines a low-volume TPE (exchange of approximately 2.5% body weight of plasma) circuit with a modified MARS secondary circuit, in which high-flux haemofiltration replaces low-flux haemodialysis (Zhou et al. 2015). This approach seeks to benefit from the more comprehensive detoxification achieved by TPE compared to MARS, without need for a supply of exogenous fresh frozen plasma, as patient plasma is returned post-detoxification to the patient. In a D-galactosamine pig model of ALF, Li-ALS resulted in an improvement in survival compared to treatment with low-volume TPE alone and to treatment with the modified MARS circuit alone (Zhou et al. 2015).

In DIALIVE blood is filtered across two filters; one a high-cut off membrane (nominal cut-off of 60kDa) through which albumin passes, the second is a selective endotoxin adsorption membrane. Albumin lost during filtration is replaced by HSA infusion (Lee et al. 2015), thus this effective albumin exchange addresses the irreversible loss of detoxifying function of albumin in liver failure. Targeted removal of endotoxin aims to reduce innate immune response, which is a key pathophysiological component driving ACLF. In a pig model of paracetamol-induced ALF, DIALIVE improved survival and cardiovascular and respiratory function and reduced circulating dysfunctional albumin, endotoxaemia and immune system activation (Lee et al. 2015). DIALIVE is currently being evaluated in a multi-centre RCT to assess its performance and safety (clinicaltrials.gov/ct2/show/NCT03065699).

The bioreactor features of AMC-BAL are a non-woven matrix for 3D hepatocyte cultures; spiralling of this 3D matrix around oxygen carrying capillaries; and direct exposure of hepatocytes to patient plasma (van de Kerkhove et al. 2005). The first trial of this device in 12 ALF patients used primary porcine hepatocytes; however, the risk of zoonoses has tempered further development as porcine DNA was found in patient plasma (van de Kerkhove et al. 2005).

The idea of liver assist is extremely attractive for patients with liver failure, as the liver possesses huge capacity to regenerate. If the patient can be kept alive long enough, it may be possible for the liver to regenerate and return the patient to the state of health they were in prior to developing liver failure. Although many of the devices available have been shown to improve the clinical condition, only plasma exchange was able to improve transplant-free survival of patients with ALF. Attempts to develop effective extracorporeal liver assist devices continue. With better device design, understanding of the pathophysiological basis of liver failure and emergence of tools to stratify patients, it is likely that an effective liver assist device will emerge.

Rajiv Jalan has research collaborations with Takeda, Ocera, and Yaqrit, and consults with Yaqrit. Rajiv Jalan is the founder of Yaqrit Limited, which is developing UCL inventions for treatment of patients with cirrhosis. Rajiv Jalan is an inventor of ornithine phenylacetate, which was licensed by UCL to Mallinkrodt Pharma. He is also the inventor of Yaq-001, DIALIVE and Yaq-005, the patents for which have been licensed by his university into a UCL spinout company, Yaqrit Ltd. No other authors declared conflicts of interest.

What happens before patients arrive in the ICU? We know that status pre-ICU is associated with outcomes after patients leave... Read more

liver support, liver assist, bioartificial liver The use of extracorporeal liver assist is to enhance the regenerative environment by removing or replacing toxic molecules while the liver can regenerate. The available devices and emerging technologies described