Fluid Overload is Not Only of Cosmetic Concern

(Part II): results from a meta-analysis and practical approach

The ebb phase was characterised by Cuthbertson in 1932, by the presence of “ashen faces, a thready pulse and cold clammy extremities”, while during the flow phase, “the patient warms up, cardiac output increases and the surgical team relaxes” (Malbrain et al. 2012). Recent data tell us, however, that many patients do not enter the flow phase spontaneously. In order to avoid a positive cumulative fluid balance with peripheral oedema and organ oedema, resulting in end-organ dysfunction and failure, these patients may need a little help in the transition from ebb to flow (Cordemans et al. 2012). This article will check the evidence with regard to the impact of a positive fluid balance on patient outcome and how to deal with it at the bedside.

Background and Results of Meta-Analysis

The below PICO method was used in performing a meta-analysis of the available literature in order to find an answer to the following question: Does a management strategy attempting to obtain a daily fluid balance (FB) close to zero, or even negative (conservative fluid strategy), after day three result in a lower intra-abdominal pressure (IAP) and improved patient outcome compared with management approach that accept a liberal fluid strategy, and will the latter result in higher IAPs in critically ill adults in intensive care units? 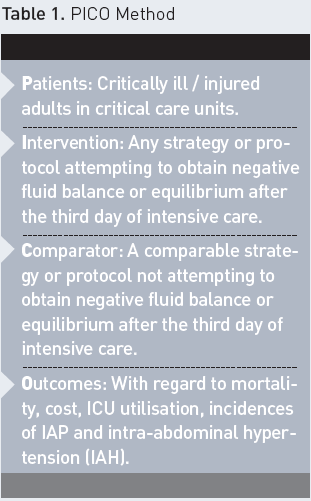 We applied the Grades of Recommendation, Assessment, Development and Evaluation (GRADE) system to guide the assessment of evidence when addressing the clinical management questions. Opinions were graded from high to very low to help determine the strength of recommendations. Proposals at the top of the scale (Grade 1A) suggested that the overall desirable effects of intervention clearly outweighed potential undesirable effects, while weaker recommendations (Grade 2D) indicated that the balance of risks and benefits for any intervention was rather unclear. Lowest ranking opinions suggested that clear uncertainty existed on any benefits from intervention, meaning that no final recommendation could be made.

By performing a Medline and Pubmed search, 40 articles were identified and included in this analysis: there was one meta-analysis (albeit only published in abstract form), while there were 10 randomised controlled clinical trials (four of which were blinded), seven interventional studies, 28 observational studies, and four case series. In total, 23,625 critically ill patients were studied in the 40 articles; in 23 studies the IAP was also measured. Through analysing the data collected, we developed four subquestions:

2. Does intervention to limit fluid intake or lower FB improve outcome? Data on 12,871 patients from 23 studies showed that outcome significantly improves with a conservative fluid regimen (odds ratio 0.34). In patients treated with a restrictive fluid regimen, mortality decreased from 29.1 percent (1,859 deaths in 6,384 patients) to 22.2 percent (1,443 deaths in 6,488 patients) (p < 0.0001). Actual data on cumulative FB was available in 6,555 patients from 13 studies. Data suggests that conservative treatment results in a less positive FB. Cumulative FB was on average 5,470 ml less positive after one week of ICU stay. The summary of findings of these studies is given in Table 2.

4. Does IAP improve with interventions acting on lowering FB? Only 10 studies looked at the effects of fluid removal (by using furosemide or renal replacement therapy with net ultrafiltration) on IAP. These were case studies or small series. A total fluid removal of 6,810 ml resulted in a drop in IAP from 21.5 mmHg to 12 mmHg. A dose related effect was observed: the more negative the FB, the greater the decrease in IAP 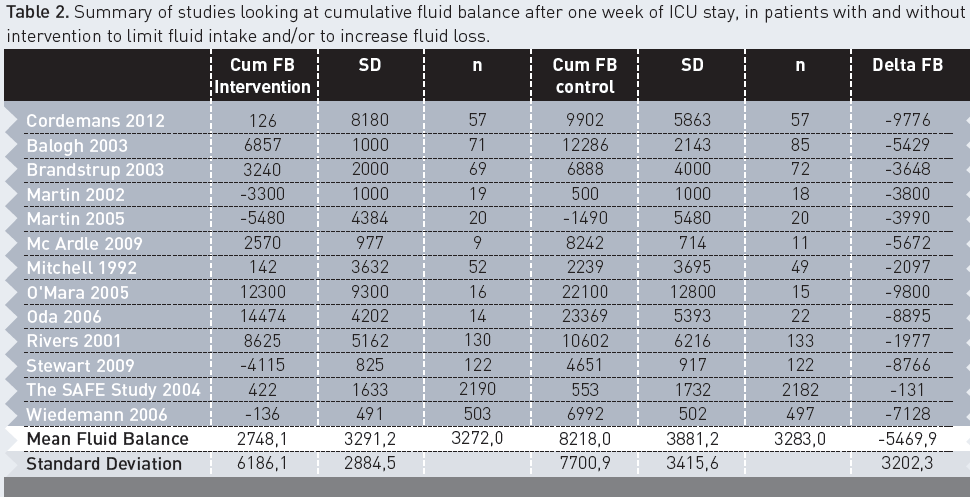 Suggestions for Management and a Practical Approach

In light of this evidence, we recommend the use of a protocol to try to avoid a positive cumulative FB occurring in the critically ill, especially in those with, or at risk of, IAH, and after acute resuscitation has been completed and the inciting issues and source control have been addressed (Grade 1B). We suggest obtaining a zero to negative FB by day three and keeping the cumulative FB on day seven as low as possible (Grade 1B). A vicious cycle leading to more fluid loading and further IAP increase is illustrated in Figure 1, and this must be avoided.

After reviewing the scarce evidence, we can only make a weak suggestion regarding the use of diuretics or renal replacement therapy (in combination with albumin) versus nothing to mobilise fluids in haemodynamically stable patients with IAH and a positive cumulative FB following acute resuscitation and source control measures (Grade 2C). The lack of consensus for this intervention underscores the uncertainity regarding it’s role in managing FB and subsequently IAH, and signifies the need for further study. 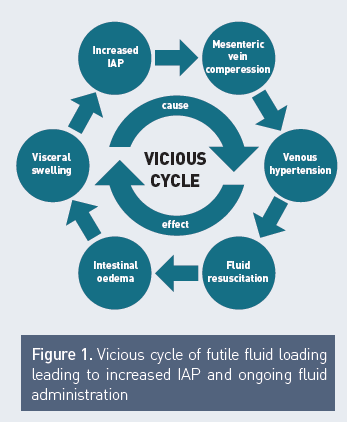 Recently, the effects of a restrictive fluid regimen on patients with negative FB, who are using PAL-treatment, were examined in mechanically ventilated patients with ALI, who were presenting with severe hypoxemia, increased EVLWI and IAP (Cordemans et al. 2012). PAL-treatment combines high levels of positive end-expiratory pressure (PEEP), small volume resuscitation with hyperoncotic albumin, and fluid removal with diuretics or ultrafiltration during continuous renal replacement therapy (CRRT). First, a 30 minute application of PEEP is titrated to counterbalance the effects of increased IAP (best PEEP in cmH2O = IAP in mmHg). Next, hyperoncotic albumin (20 percent) solution is administered with 200 ml boluses, over a 60 minute period, twice on the first day; it is subsequently titrated towards a serum albumin level of 30 g/dl. Finally, after 30 minutes, a furosemide drip is initiated with an intravenous loading dose of 60 mg, followed by a continuous infusion at 60 mg per hour for the first 4 hours and 5-10 mg per hour thereafter, according to haemodynamic tolerance. In anuric patients, CRRT is initiated with an ultrafiltration rate resulting in neutral to negative daily fluid balances.

In a recent study of 57 patients, compared with 57 matched controls, we found significant beneficial effects of PAL-treatment on EVLWI, IAP, organ function and vasopressor therapy during one week. This resulted in a shorter duration of mechanical ventilation and an improved 28-day mortality. Through combining the results of two recent studies (with number of patients totalling 180), we found that the group of patients treated with conservative initial and late fluid management had the best outcome, followed by those who received initial adequate and late conservative fluid management (Cordemans et al. 2012; Cordemans et al. 2012). Mortality was significantly increased in those patients who received late liberal fluid management (Figure 2). This is in line with previous results by Murphy and co-workers (Murphy et al. 2009). 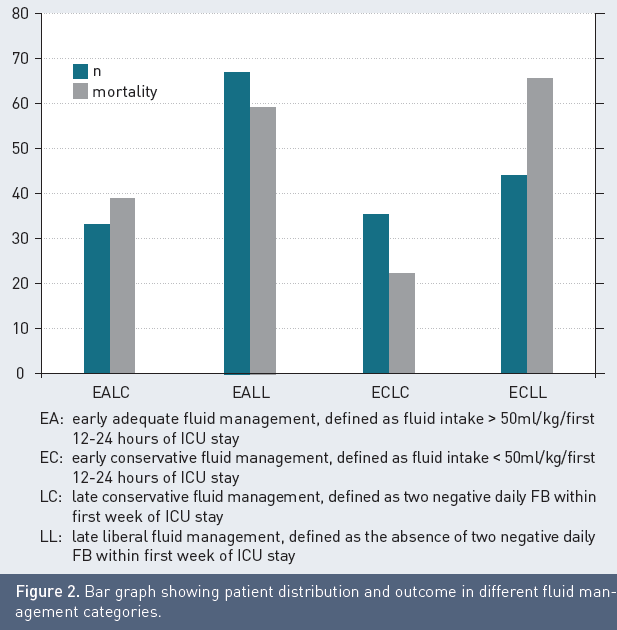 Late conservative fluid management may, in the long run, be even more important than initial resuscitation efforts during the ebb phase in patients with shock. EVLWI can be used at the bedside as a guide to initiating a conservative late fluid strategy or late goal directed fluid removal in those patients that do not transgress spontaneously from the ebb to the flow phase of shock. However, we must remember that no single parameter can change outcome; this can only be achieved by a good protocol. PAL-treatment seems a good example of such a protocol, but further prospective studies are needed.

Cotton, B. A., N. Reddy, et al. (2011). "Damage control resuscitation is associated with a reduction in resuscitation volumes and improvement in survival in 390 damage control laparotomy patients." Annals of surgery 254(4): 598-605.