Elevated blood glucose is a widely recognised response to critical illness, with most non-diabetic patients exhibiting concentrations outside the normoglycaemic range and a substantial proportion having significantly or hugely elevated blood levels (Farrokhi et al. 2011). It has been 15 years since the publication of the Leuven study abruptly changed the landscape of glycaemic control, highlighting the tolerated wide range of blood glucose levels and the potential benefits of tight glycaemic control in cardiac surgery patients (Van den Berghe et al. 2001).

Since these highly encouraging results, a plethora of studies have been carried out to replicate these outcomes in other patient groups and to better understand the underlying mechanisms of the benefits of insulin infusion therapy (IIT). The latter have identified that hyperglycaemia is associated with morbidity, particularly to the kidney and liver, and that insulin itself does not offer any particular effect beyond control of glucose levels (Ellahham 2010).

However, attempts to apply tight glycaemic control across different groups of critically ill patients have met with mixed success due to the difficulties of maintaining control. Studies encountered increased rates of hypoglycaemic injury when trying to implement tight glycaemic control, and were terminated where the harm was deemed to be greater than any benefit (NICE-SUGAR Study Investigators 2009; Brunkhorst et al. 2008). Furthermore, variability in glucose levels was found to be a strong independent predictor of mortality (Krinsley 2008) and diabetic patients’ requirements are distinctly different from non-diabetics (Krinsley et al. 2013).

As noted by Krinsley (2013), this has left clinical staff with the advice that they should “(a) target a discrete blood glucose range by using insulin, (b) avoid hypoglycemia, and (c) minimize glucose variability.”

In order to better understand how the current state of knowledge is being applied and where the challenges are, a survey of ninety adult intensive care units (ICUs), thirty in each of the United Kingdom, Germany and the Benelux countries in a range of teaching and general hospitals was carried out on behalf of Sphere Medical.

The survey identified three trigger strategies for starting IIT in the protocols used. These ranged from routine insulin infusion for all patients admitted to the unit, initiation on a single elevated glucose reading through to persistent elevated glucose levels over time or multiple readings.

Overall an estimated 65% of patients admitted to intensive care were treated with IIT. However, strong geographic differences in clinical practice were observed (Figure 1). Fifty percent of centres in the Netherlands routinely implement IIT on all patients, while no units in the UK reported this practice, and the highest proportion of units waited for prolonged elevated glucose levels before initiating control. As a result, IIT is delivered to 50% of patients in the UK but 85% in the Netherlands compared to around 65% in both Germany and Belgium/Luxembourg. 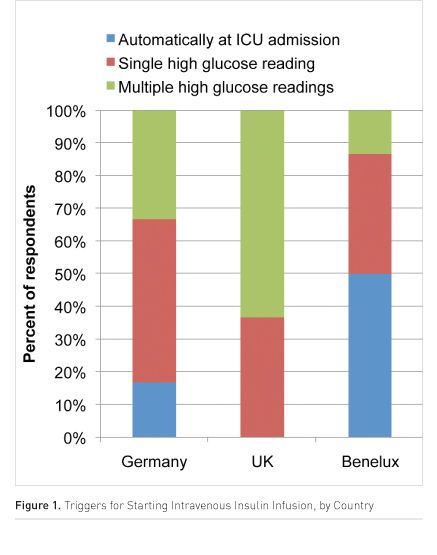 The decision to stop IIT was driven by stability of glucose levels and the establishment of enteral nutrition in the majority of units. In the remainder, and particularly in the Netherlands, it was a part of discharge of the patient from the intensive care unit. Tight Glycaemic Control?

None of the centres questioned were trying to maintain control to normoglycaemia in their patients. Around half of centres have a relatively liberal upper threshold of 10 mmol/l (180 mg/dl). Most of the rest of the centres were maintaining a moderate level of control keeping below 8 mmol/l (~140 mg/dl) with a minority below 7 mmol/l (~130 mg/dl). Again, there is a distinct difference between the countries in the survey, with ICUs in Benelux most likely to control more tightly than those in other countries (Figure 2). 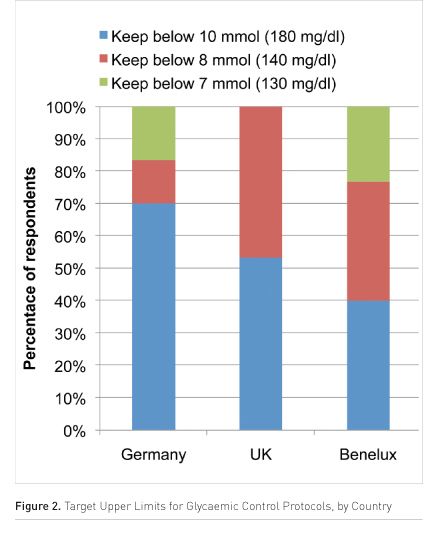 Survey participants estimated the frequency of testing as every three to four hours. All except one centre used a blood gas analyser (BGA) to measure arterial samples for glucose. However, many units used multiple measurement approaches and just under 70% of samples are arterial blood measured on the BGA. Around 20% of measurements made are capillary samples measured on a glucose test strip meter (Figure 3). As shown in Figure 4 (p. 210), there are a number of difficulties with implementing an effective glycaemic control protocol. 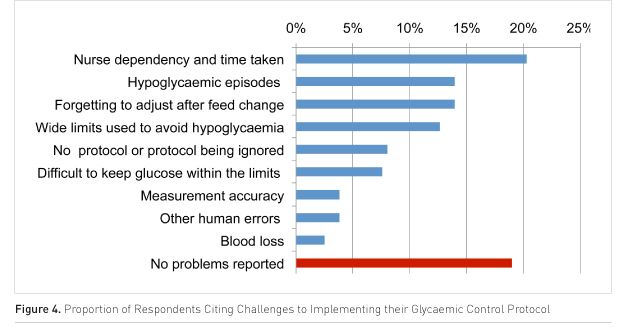 The benefits of avoiding mortality and morbidity associated with hyperglycaemia in critically ill patients have been demonstrated and are understood. This has resulted in a widespread change in clinical practice to control excessively high glucose levels. However, the difficulty with safely and consistently maintaining blood glucose concentrations has hampered the ability to determine optimal target blood glucose concentrations. Closer control tends to lead to an increase in hypoglycaemic events, themselves associated with increased mortality. As a result, even after fifteen years of investigation, IIT protocols remain highly heterogeneous across northwest European ICUs and 80% of units cite problems with implementing their adopted protocols.

Frequent blood glucose monitoring is essential for optimally managing IIT. However, this can be a significant burden and was the most common problem cited by the clinical staff surveyed. Typical protocols require hourly measurement of blood glucose and, if necessary, adjustments in insulin infusion rates until glucose levels are stable and in the target range, at which time measurements can be taken every two to four hours. Any changes that could affect glucose levels, such as insulin or feed changes require reverting to hourly measurement until stability is evident.

In addition to the increased workload caused by glycaemic control, risks of hypoglycaemia and the widespread use of capillary samples are major concerns. Capillary test strip measurements offer workflow advantages, however, and the use of capillary test strips is associated with a range of limitations and potential sources of harm (Corl et al. 2015) and can lead to significantly biased results (Petersen et al. 2008).

Despite the move away from tight glycaemic control, hypoglycaemia remains a challenge for routine clinical practice, either due to the incidence of hypoglycaemic episodes or the relaxation of target ranges to lower the risk of such incidents.

The ability to better control glucose levels is important both for safer clinical practice and as a necessary condition for any further work to optimise glycaemic control as a therapy in critical care. This requires:

b) A protocol that can deliver control within the desired limits

c) Processes that ensure compliance to the protocol

A number of continuous and intermittent systems for glucose monitoring are now commercially available for use in critical care. Subcutaneous sensors do not appear to be able to provide the level of accuracy required for the management of critical care patients (Wollersheim et al. 2016). Continuous monitoring catheters have been developed, but their adoption has been very limited so far, possibly because of their invasiveness (a central venous catheter or dedicated cannula is required) and the costs involved for monitoring a single parameter. Ex-vivo blood gas analysers are now available (www.spheremedical.com), which allow intermittent measurement of a fuller panel of analytes with an improved workflow over traditional blood gas analysis.

Computer-assisted control systems have demonstrated the ability to provide an acceptable level of glucose control using intermittent measurement (Juneja et al. 2009). These incorporate algorithms that determine the required insulin infusion rate to maintain glucose within the target range as well as the necessary measurement frequency.

In combination, these technologies meet all of the three requirements identified above. At the very least they offer the ability to provide safer, more consistent implementation of existing targets. On the upside, they offer further opportunity to investigate and optimise glycaemic control in critically ill patients

Whether they are called handoffs or handovers, it is known from the literature that the transfer of patient information between... Read more

Severe hypoxaemia and cardiovascular collapse, leading to cardiac arrest, cerebral anoxia and death, are the most frequent... Read more