Technological advancement has made robots an integral part of several fields, including medicine. This article provides an overview of the application of robots to anaesthesia, highlighting recent developments. Pharmacological robots are closed-loop systems, able to precisely titrate the dose of anaesthetic drugs to a preset value, concerning hypnosis, analgesia and neuromuscular block. New evidence shows the possibility to feasibly control haemodynamic, respiratory and metabolic parameters. Mechanical robots automatically reproduce manual tasks, showing promising performance. Decision support systems and teleanaesthesia can improve clinical practice. The use of robots in anaesthesia shows the advantage of eliminating the repetitive part of the workload, allowing the anaesthesiologist to focus on patients. Additional studies will be addressed to test safety and refine algorithms of functioning, in order to maintain homeostasis through an automatic integrated control of all biological variables.

Background: the Rationale for Robots in Anaesthesia

The use of robots is part of the technological advancement in several aspects of our lives, from aviation to construction, from industry to medicine. Different definitions of robots have been presented (Hemmerling et al. 2011a). Automation, reproducibility and precision of an action are key elements of robots, which make their use advantageous. Recently this progress has involved the field of anaesthesia. The concepts of robotisation and automation have a potentially great impact on anaesthesia for different reasons. Essentially robots perform measurements, make decisions and perform actions accordingly, which represent what anaesthesiologists continuously do to maintain body homeostasis (Dumont and Ansermino 2013). The activity of anaesthesiologists is displayed in complex environments (operating room, intensive care unit) and requires technical and non-technical skills to be competently implemented (Smith and Greaves 2010). The repetitive implementation of technical and nontechnical tasks (e.g., manual tasks, decisionmaking) during the day, or even in an emergency, may negatively affect the performance of further tasks, due to the accumulation of fatigue and drop in alertness, factors exacerbated by ageing and possible coexisting issues, with a variable safety outcome for patients (Atchabahian and Hemmerling 2014). Robots can eliminate the repetitive part of the workload, the acquisition of patient data, decision-making and manual tasks, and allow  anaesthesiologists to efficiently focus on patients and the related perioperative issues (Cannesson and Rinehart 2014). Consequently, the workload is ‘smartly' distributed and implemented as if the anaesthesiologist had a technological mental and physical ‘extension’. In addition, several physiologic functions can be seen as a combination of automatic feedback circuitries, which can be controlled by robots in such terms. This change would mean the increase in accuracy and safety of the care being delivered, with robots assisting this process without replacing the conduct of anaesthesiologists. For these reasons, two main types of robots have been developed in anaesthesia: pharmacological robots and mechanical (or manual) robots (Hemmerling and Terrasini 2012). A third category is represented by decision support systems: they can be regarded as precursors of robots by helping anaesthesiologists in decision-making through relevant and updated information. This article will present an overview on the application of robotisation in anaesthesia, focusing on the latest advances.

Pharmacological robots are designed to correctly titrate anaesthetic drugs (Hemmerling and Terrasini 2012) and control biological parameters of anaesthetic concern. Robots exert a control, meaning the regulation of the functioning of a system in drug administration (Dumont and Ansermino 2013), which is performed by a closed-loop modality. Closed-loop or feedback control means that in predetermined time intervals a controller acquires measurements of a variable (controlled), which are compared to a desired target value (set point): if there is a difference, the controller modifies the manipulated variable in order to restore the controlled variable to the set point (Dumont and Ansermino 2013). On the basis of this model, three main elements are recognised: software (the controller), an effector (e.g., drug delivery system, ventilator) and some variables (usually one controlled and one manipulated, deriving from either the patient or the effector). Robots continuously adjust the administration of drugs and maintain a biological target without manual input (Hemmerling and Terrasini 2012). To date the closed-loop control has been applied to the three components of anaesthesia: hypnosis, analgesia and neuromuscular block. Recently, new applications concerning ventilation, haemodynamic homeostasis, metabolism and temperature have been developed (Dumont and Ansermino 2013). These modern additions may allow anaesthesiologists to have complete feedback control of all aspects of human homeostasis (Fig. 1). 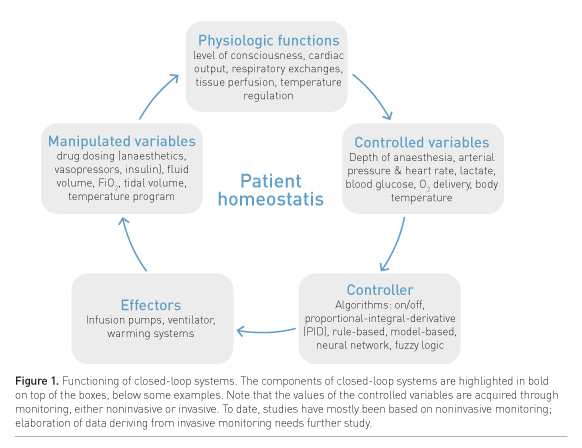 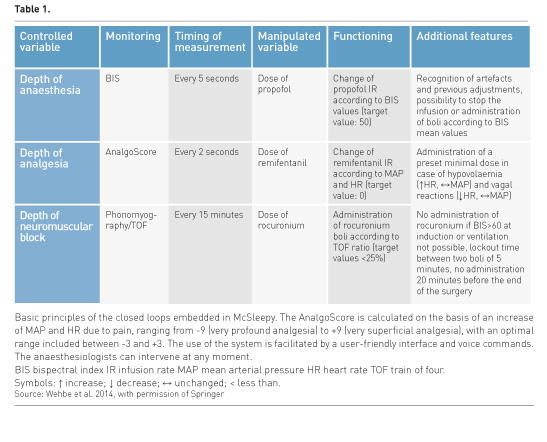 Sedasys® (Ethicon, Somerville, NJ, USA) is a computer-assisted personalised system intended for mild to moderate propofol sedation in healthy adults, managed by a non-anaesthetist member of staff (Banerjee et al. 2011). This device has been approved in Canada for colonoscopy (Banerjee et al. 2011) and in Australia, the European Union and the United States for colonoscopy and oesophagogastroduodenoscopy (Banerjee et al. 2011; Goudra et al. 2014). The system records patient data (e.g. arterial pressure, saturation, respiratory rate), automatically adjusts propofol rate infusion, oxygen flow and also gives cues to optimise patient responsiveness (Banerjee et al. 2011). Another system is the hybrid closed-loop sedation system (HSS), defined as hybrid since it includes a decision support system and a closed-loop control for propofol administration (Hemmerling et al. 2011b; Zaouter et al. 2016). It was tested in patients undergoing hip or knee arthroplasty under spinal anaesthesia and propofol sedation, monitored by the BIS. In the HSS group, the control of sedation showed more consistency and the control of adverse events (apnoea, hypotension) was more accurate than manual control (Hemmerling et al. 2011b).

This kind of robot is designed to give support or replace manual gestures of anaesthesiologists. The two main fields of application are endotracheal intubation and regional anaesthesia. In regard to intubation, a first trial involved the use of the da Vinci® Surgical System (Intuitive Surgical, Inc., Sunnyvale, CA, USA) in the performance of two simulated fibreoptic intubations, which were both successful even if technically difficult due to the robot design with multiple robotic arms (Tighe et al. 2010). The Kepler Intubation System (KIS) (Hemmerling et al. 2012a) is composed of one robotic arm linked to a standard videolaryngoscope at one end, and remotely controlled by a joystick controlled in turn by a specific software and interface (Fig. 2). Intubations can be performed automatically or semiautomatically, under direct vision or remotely: procedural time ranged overall from 40 to 60 seconds in 90 simulated intubations, which were successful at the first attempt (Hemmerling et al. 2012a). In a trial in 12 patients, the KIS showed a success rate of 91% with a mean procedural time of 93 seconds, without complications (Hemmerling et al. 2012b). In regard to regional anaesthesia, an attempt at ultrasound-guided nerve block and placement of a perineural catheter was carried out on a phantom using the DaVinci System, with the same constraints mentioned for intubations (Tighe et al. 2010). The Magellan system (Oceanic Medical Products, Inc., Atchison, KS, USA), has been developed to perform robotassisted, ultrasound-guided nerve blocks by the use of a robotic arm, with a nerve block needle at the end, guided by a joystick and controlled by a specific software and interface (Fig. 3) (Tighe et al. 2013). A success rate of 100% was achieved on a standard ultrasound phantom (Tighe et al. 2013) and subsequently in 13 patients undergoing popliteal block with a maximum procedural time of 4 minutes (Hemmerling et al. 2013b). This system could be integrated with software which allows for the automatic recognition of the nerve on the ultrasound image, without human search (Wehbe et al. 2012). It is still under development after the first promising results (Wehbe et al. 2012). In addition, it has been recently shown that the use of robots for ultrasound-guided nerve blocks is associated with faster learning and a lower inter-subject variability than manual performance in a simulated setting (Morse et al. 2014). 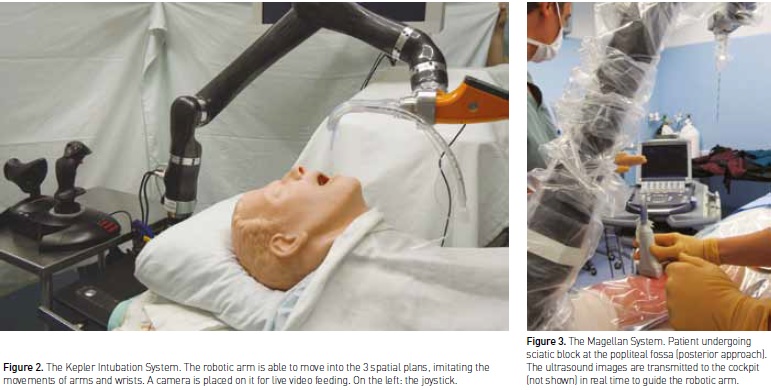 Good clinical practice can be enhanced by the use of decision support systems (DSS) and telemedicine. Decision support systems are designed to provide the performer with updated clinical suggestions and options for treatment. They are precursors of robots, able to detect adverse events and enhance compliance with guidelines. It has been shown that DSS are effective in facilitating the achievement of haemodynamic (Sondergaard et al. 2012) and ventilation (Blum et al. 2013) set points, with a performance at least the same as the one of the anaesthesiologist. DSS improve the detection and the management of intraoperative hyper- and hypotension (Nair et al. 2014), critical events (respiratory and haemodynamic) during sedation (Zaouter et al. 2014) and epidural haematoma in patients under anticoagulant or antiplatelet therapy (Gupta 2014). Telemedicine is a form of delivery of healthcare using information and communication technologies when distance between the providers is significant (Chatrath et al. 2010). Many applications in anaesthesia are currently under development, ranging from pre- and intra- to postoperative applications, with promising results (Chatrath et al. 2010; Galvez et al. 2011). This is highly advantageous for some rural areas of the world where there may be a paucity of physicians and healthcare facilities (Chatrath et al. 2010), as well as an additional opportunity for training and learning (Galvez et al. 2011). The remote control of general anaesthesia has been successfully performed between two different countries (Canada and Italy) by using robots (McSleepy) (Hemmerling et al. 2013c). This pilot study in 20 patients undergoing thyroid surgery in Italy showed the feasibility of teleanaesthesia, with no additional risk of complications (Hemmerling et al. 2013c). Remote preoperative airway assessment between the same two countries has been demonstrated to be feasible as well (unpublished data).

Robots in anaesthesia are designed to eliminate the repetitive part of the workload. The objective is to safely and effectively deliver anaesthesia and have control of all biological variables involved in homeostasis, which is at the base of a good patient outcome. Robots can be helpful to exert this control continuously and simultaneously, with anaesthesiologists having the possibility to 'open the loop' when needed. The automatic management of general anaesthesia, sedation and manual tasks is not inferior to the conduct of anaesthesiologists, but can be even better. Decision support systems and teleanaesthesia can significantly improve the quality of care and the opportunity for training. Additional studies are needed to further test the safety of robots and to develop more refined systems of control and monitoring in order to integrate all components of the management of anaesthesia, augmenting their reliability and overcoming the possible limitations related to their use.

Bringing new technologies to anaesthesia: are we there yet?

Maxime Cannesson, MD, PhD, is Professor of Anesthesiology and Vice Chair for Perioperative Medicine at UCLA. He is the Technology,... Read more

Obese patients without other major co-morbidities are categorised as class II according to the American Society of Anesthesiologists (ASA)... Read more

Robots, anaesthesia, anaesthesiology An Introduction to Robots in Anaesthesia (Thomas M Hemmerling, Marilu Giacalone) Both mechanical and pharmacological robots can play a useful role in anaesthesia.