Cristina Rodriguez is a consultant in the health field and takes part in the joint management of the Cerdanya’s Hospital project.

Victorià Peralta is the delegate of Catalan Health Service on Alt Pirineu I Aran and member of the the Comissió Permanent (Permanent Commission) and of the Patronat de la Fundació Privada Hospital Transfronterer de la Cerdanya.

Enric Mayolas is the Director of Office of International Relations and Cooperation of the Departament de Salut de la Generalitat de Catalunya Government of Catalonia(the Catalan government’s health department); he is a member of the Comissió Permanent (Permanent Commission) and of the Patronat de la Fundació Privada Hospital Transfronterer de la Cerdanya.

The domain of La Cerdanya and Le Capcir is a geographically isolated area formed by a valley in the eastern Pyrenees. By the Treaty of the Pyrenees in 1659, Spain and France distributed the land, dividing it into two parts.

The territory has a population of approximately 32,000 inhabitants, with a practically equal parity between the north and the south. Its economy is essentially based on the service sector, especially on the tourism industry. During the holidays, the estimated resident population can reach up to 130,000 inhabitants.

Since 2003, and thanks to a research co-financed by the French district of Languedoc-Roussillon, Catalonia and the European Union (Interreg III), the idea of the construction, starting and joint management of a hospital for acute short-stay patients has strengthened. The hospital, a public property following agreements between the French Republic and the Generalitat de Catalunya (Catalan government), will be located in Puigcerdà, the natural capital city of La Cerdanya, replacing the current hospital which attends the Lower Cerdanya (Spain), and filling the actual gap and lack of service attending this kind of patients in the Upper Cerdanya and Capcir (France).

1.The Institutional and Governing Line.

The upcoming hospital of La Cerdanya needs to set up an interadministrative organisation with its own legal entity allowing the representation of all the involved actors. The Agrupació Europea de Cooperació Territorial (Europea Group of Territorial Co-operation), a model promoted by the European Union and the parliament, is the chosen instrument. In 2006 Cerdanya’s Cross- Border Hospital Private Foundation was created as a temporary instrumental entity towards a better efficiency of the project management.

Even though each health authority has its own instruments (Health Plan and Health Map in Catalonia and the SROSS 3 in France), a joint planning following the each partner’s basic criteria has been developed.

It will be a hospital with a built area of 14,190 sq. M and an approximate cost of 32 million euros.

Even though the hospital will be ruled under the Catalan and Spanish jurisdiction it will be owned by two different states’ administrations. Assistance patterns (both differing as far as development and organisation stages), admissions of two populations with two distinctive cultures in the use of different health resources (strongly influenced by the problems of professional demography in Europe and particularly in isolated areas), applicable legal frameworks, not only from the welfare point of view but also in the daily operations, contract models and case-mix, for instance, will have to be integrated. 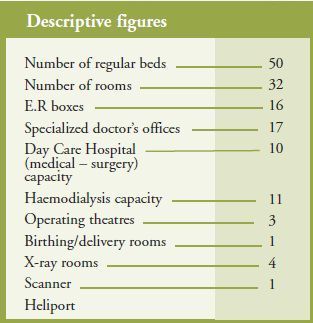 The standardisation of the clinic’s relationship with health professionals through a performance protocol and clinical practice guidelines will make the hospital a center of reference. Also, this territorial network will have to develop the functions of a territorial observatory and work on the health promotion, education and disease prevention fields.

Even though it is still on a design stage and soon under construction, the project features a set of big challenges:

The health models in France and Catalonia are different, thus bringing up differences in the relationship systems between the administrations and the supply network as well as causing the rules of the game to use distinctive instruments. Even the citizen’s legal benefits are different.

This shared project uses some basic premises focused on the citizen and his or her rights and obligations. It will be up to the hospital’s organisation and both its clinical and administrative services to make the effort to adapt to this reality.

A good example is the information system being worked on which has to be able to answer to the needs of the professionals, of the organisation, of both administrations, of the different financing parties (public or private, insurance com panies, benefit societies…), of the other actors in the territorial network… and on top of that in three languages.

Let’s take the example of ambulatory care both in specialists’ consultations as in other spheres such as surgery without hospitalisation or with daytime hospitalisation. Whereas in Catalonia it has always been an efficiency sign conditioned to the different paying systems (paying upon process), in France this hadn’t been introduced until very recently and yet in a very discrete way.

Different Patterns of Political and Work Relationships Among the Human Resources…but One Single Project.

Finally, the third big challenge is that of the organisation’s structure, which means attracting competent professionals to an isolated area.

We are working on the idea of a management and organisation based on the Catalan model (‘droit du sol’), but we want to involve all health professionals (nurses, administrative staff…) more closely in the management of their work.

The hospital will be small. According to French law, some of these low-activity departments would not be authorised, but according to Catalan rules, they are allowed to operate. So, in order to maintain specialists’ medical competences, the best option is to ensure partnerships with reference hospitals in both networks. This cooperation goes beyond mere patient transfers and gives doctors the opportunity to practice their specialties.

Even though the construction and management project of the “Hospital de la Cerdanya” has only started and has very important challenges to overcome, it also offers some advantages.

This is a necessary project for the area. Due to its current location, Puigcerdà’s hospital has no growth possibilities and the patients from the Upper Cerdanya and Capcir (France) have to be cared for in hospitals

situated more than 90 minutes away. Access to care has to be guaranteed based on a win-win relationship and mainly considering the people to whom this hospital will have to be of service.

For further information about the project’s history and features, we recommend visiting the site http://www.hcerdanya.eu.


Authors: Xavier Conill is a member of the Fundació Clínic per a la Recerca Biomèdica in the filed of innovation of health systems and he is the secre

Utility of Chest Radiograph for Clinical Diagnosis of COVID-19

One of the main organs affected by the coronavirus is the lung. While... 117344Read more