Retired Professor of Radiology and Chairman - University of Pisa
Italy

Recruiting a Retired Physician: Our Experience

An overview of a physician’s journey and the impact of retirement and a presentation of an example of an anaesthetist who worked ten years in our radiology department after his retirement.

In an insightful review published in 2018, Harriet Gordon notices that part of the workforce crisis is due to the fact that most physicians retire around the age of 62, contributing to a potentially dangerous trend in consultant physician appointment rate that has fallen from 73% in 2008 to 55% in 2017 (Gordon 2018; Royal College of Physicians 2016).

On the other hand, retirement can be for physicians a complex transition that not only raises questions about financial stability but also stirs up issues regarding work identity and one’s sense of social responsibility. In fact, the negative association with retirement often emanates from the simple fact that for many physicians, work identity is synonymous with personal identity (Pannor 2016).

This may be the reason why many retired consultant physicians return to the active workforce and constitute 5% of the total workforce in the UK, albeit 81% of them work less than full time (Royal College of Physicians 2018). The reasons for returning to work after retirement may include greater fulfilment, wanting to work but not as previously, and a desire not to ‘throw it all away’ (Gordon 2018).

In this paper, an example is presented of an anaesthetist who worked ten years in our radiology department after his retirement. Fernando Burchi (Figure 1) retired after working 31 years as a hospital anaesthetist. He had a successful career and had endured operating room pressure and out-of-hours work. Aged 62, he was ready to continue serving the wider medical community in a less demanding way, possibly as a part-time attending anaesthetist in the radiology department and a clinical mentor.

When I first interviewed him, I was immediately convinced that recruiting him was a very good idea. The opportunities I saw were:

The main challenges that I was expecting were:

The easiest task resulted in being the seamless integration of the anaesthetist in our radiology team. He was immediately recognised as a valuable working partner by the nurses who frequently involved him in the management of difficult venous accesses. Radiology residents and staff radiologists also showed a distinct interest in seeking his advice for preventing or treating contrast media-related adverse events. In fact, his presence during radiology sessions guaranteed increased safety to patients with previous history of allergic reaction and to patients with asthma, urticaria, and angioedema. When an allergy-like reaction took place, the attending anaesthetist ensured immediate coordinated team response: from the technical manoeuvres executed by the nurses to the treatments carried out in accordance with established guidelines. 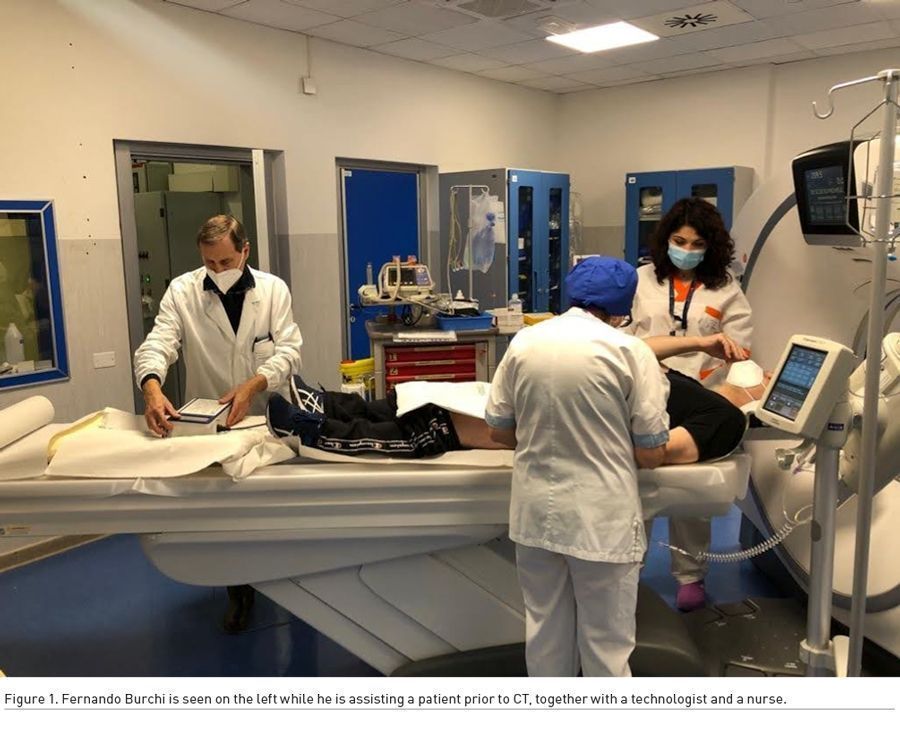 During the ten years of Fernando Burchi’s service in the radiology department, the hospital anaesthetists were relieved of part of their workload and experienced a significant decrease of requests for intervention by the radiologists.

When allergy-like contrast media reactions take place, speedy recognition and treatment are mandatory: in this case, the presence of an attending anaesthetist is useful to guarantee optimal patient care because it cuts to zero the time needed for the anaesthetist’s intervention. On the contrary, when an attending anaesthetist is not part of the radiology team, depending on the priority of the radiologist’s request to the on-call anaesthetist, the delay between request and intervention can vary between five and 20 minutes.

To overcome easy problems such as difficult venopunction, mild symptoms after contrast administration, time is not an issue in terms of patient care. However, when the delay is significant, the disruption of the radiological workflow may be of concern. In fact, an unexpected benefit of the attending anaesthetist in our department was the improvement of the radiology workflow obtained by minimising delays during the sessions.

Hospital management is typically hard to convince when a new position is created where it was traditionally absent. Moreover, it would have been unwise to give the impression to the anaesthesia department that we were competing with them in the recruiting of a young anaesthetist, who we were going to distract from the core business of their department.

Therefore, I submitted a request for funding the part-time employment of a retired anaesthetist to a charitable institution, the Gioia Foundation (Caramella and Mian 2021), which agreed to support ten years of salary (the contract is due to expire on May 31, 2021).

During this time, the hospital benefitted from the investment of the charitable institution in terms of:

Indeed, everyone was greatly reassured by the presence of the attending anaesthetist, who could intervene swiftly, solving minor clinical issues and could be readily available in case major problems arose during the examinations.

Federation of the Royal Colleges of Physicians. Focus on physicians: census of consultant physicians and higher specialty trainees 2017–18. (2018) London: RCP.

With the URIS, the Moscow Health Care Department Has Laid the Foundations for Connected Care

"One Ring to Rule Them All" in AI – Affidea’s Experience

An overview of Affidea’s experience on the road to AI implementation and the need to understand the complexity of integrating... Read more

Prof Elmar Kotter is the Vice-Chair and Director of Imaging Informatics & Quality and Risk Management at the Department of Radiology... Read more

Staff Wellbeing – In COVID-19 and Beyond

Staff  wellbeing  in a busy hospital responding to the pandemic can reap the rewards of positive relationships built... Read more

An overview of the consequences of neglecting mental health and a case study of reorganisation of mental health service practices... Read more

Creating an Awesome Future for Health