National Telehealth Can Save Money and Improve Health

Since its introduction into the Danish healthcare landscape, telehealth has shown that it can lead to better outcomes and reduced costs. Hans Erik Henriksen, of Healthcare Denmark, writes about the difference telehealth has made to the senior population in recent years.

Over recent years, Denmark has conducted a  number of telehealth pilot projects, which has given them the knowledge to launch three largescale telehealth projects. The purpose was to establish a region wide, full implementation of telehealth to support Chronic Obstructive Pulmonary Disease (COPD ) patients. From the start, the large-scale telehealth projects were analysed by more than four parallel research projects to not only implement telehealth, but also build the evidence for nationwide adoption. The research projects prove not only that substantial savings are possible with telehealth, but also that telehealth can improve patients’ Quality Adjusted Life Years (QUALY) and their general quality of life.

The introduction of IT in the Danish Health sector started in the 1970s when the first Patient Administration Systems (PAS) were introduced. During the 1990s Electronic Health Records (EHR ) and Electronic Medical Records (EMR) systems started to emerge and this was the basis for the organisation MedCom, established in 1994, with the single mission to create a nationwide Health Data Network.

By 2002 the MedCom Health Data Network was almost complete, i.e. most prescriptions, referrals, discharge letters, laboratory results and reimbursements were handled electronically. At the same time, driven by the Health IT -strategies and by MedCom, a high level of EMR adoption at General Practitioners (GP) and specialists had been achieved, and hospitals had either implemented EHR ’s or they were planning implementation projects.

Interchangeable electronic healthcare data at a national level was the inspiration for establishing the National eHealth Portal (sundhed.dk), which went live in 2003.

Today, all Danish citizens can securely access their healthcare information through sundhed.dk. This includes their medical history, (dating back to 1977), all medicine and drug information, lab results, referrals and clinical notes. Protected by the security system, the same information is available to clinical professionals, when they are treating the individual patient.

For years, Denmark has been among the countries with the highest Internet penetration and, alongside the eHealth journey, general strategies for digitalisation (eGovernment) have been implemented. In November 2014 public authorities in Denmark switched to electronic service and Danish citizens no longer receive paper letters from any public authority – instead all communication (and most services) are handled through the internet.

In conclusion Danish citizens are now used to public eServices and eHealth – and this is a perfect start point for the next steps towards nationwide telehealth.

See Also: Health IT: Benefits to Both Patients and Providers 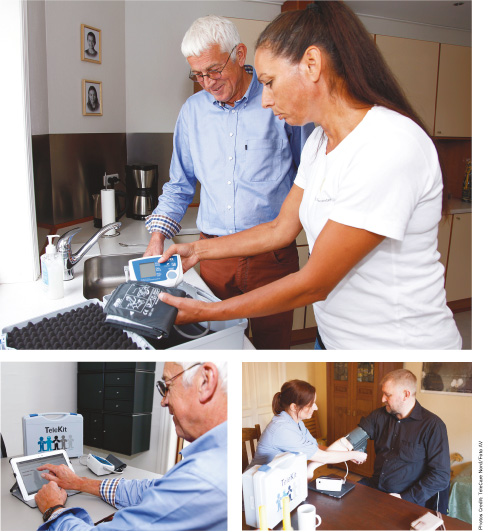 One of the main objectives of the Danish healthcare IT-strategy 2014-2020 is to advance and up-scale the use of telehealth to empower, educate and involve chronic patients in managing their own disease.

Danish Healthcare Regions are in the process of up-scaling the implementation of telehealth in close cooperation with Danish Municipalities.

In the North Region the project, TeleCare North, was established in 2011 and has rolled out telehealth support to approx. 1,300 COPD patients. Since then, large research programmes have monitored and analysed the effects and benefits of telehealth, in order to build the evidence for a national rollout.

In the TeleCare North project, The North Denmark Region, the 11 associated municipalities, Aalborg University and local doctors cooperated to enrol all patients with the lung disease, COPD , in the telehealth project.

The participants in the project received a TeleKit, which gave patients the opportunity to measure and report data about their condition by themselves. The virtual contact was supported by physical visits either at home or the hospital.

Benefits for Both Patients and Public Spending

The patients in the TeleCare North project reported a very positive experience. Six in ten experienced increased control of the disease, while more than seven in ten experienced increased comfort and mastery of their disease. Usability is key for the success of telehealth, and the patients’ feedback on the TeleKit was positive. A random sample made during the TeleCare North project showed how almost ninety percent thought it was easy or very easy to use the TeleKit.

In The North Denmark Region alone, 45,000 citizens are diagnosed with COPD , and it is estimated that around ten percent of these COPD patients are characterised as severe or very severe. Figures from the Danish Lung Association estimate that around 23,000 COPD hospitalisations are made annually throughout Denmark. Hence, the economic potential is significant if telehealth leads to fewer hospitalisations.

For both patient categories, the researchers who followed the project documented that the patients quality of life, as telehealth patients, improved because of the increased education and insights in living with their chronic disease. Also documented was that the ability to participate and be active in controlling their own disease was an important factor in both quality of life improvements and in reducing the number of admittances to hospital.

Can Danish health authorities save money and at the same time achieve the above-mentioned effects - improving the patients quality of life and QUALY? This was the key question to be answered to enable a decision to be taken to implement telehealth on a national scale.

The result of the financial analysis is that the payback time for investing in national implementation of telehealth in Denmark, to support all COPD patients in the GOLD 3 and 4 target groups, would be two to three years. This is based on three different scenarios, where the likely scenario indicates an annual investment/savings of 1:3 (i.e. every time one euro is invested, it generates a saving of three euros). The best-case scenario indicates a savings/investment ratio of 1:4 and the most conservative scenario a ratio of 1:2.75.

The large-scale telehealth projects for COPD patients have proved the case for telehealth as a means of reducing hospital admittances, reducing costs and improving the quality of life for patients. This has been fundamental in Denmark’s decision to implement telehealth at a national level, starting out with the target of implementing national telehealth support for all Danish COPD patients before the end of 2019.

The large-scale telehealth projects also resulted in new ways of working and organising telehealth support between the regions, hospitals, municipalities and primary care services. These results and experiences are helping the regions to take the next steps towards regional implementation of telehealth support for other chronic patient categories like diabetes and heart disease patients.

Harnessing the power of connected care and telehealth

Amid the COVID-19 pandemic women are often deprived of necessary health care. The research on women’s health in this context... Read more

In this article, we discuss some aspects of note with regard to virtual clinics, including their proposed benefits and associated... Read more

National Telehealth Can Save Money and Improve Health

Since its introduction into the Danish healthcare landscape, telehealth has shown that it can lead to better outcomes and reduced... Read more

HealthManagement.org is pleased to bring you a flavour of Dr. Heywang-Köbrunner’s keynote lecture to the EUSOBI 2016 annual... Read more