Health Economic Systems: How Do They Influence Radiology?

Why do Healthcare Markets Fail? The Origin of Health Economics

In an ordinary market, the client uses their knowledge and the resources available in order to make purchases, which will cover their needs. Depending on their knowledge, their needs and the money that they possess, they compare prices and products in order to make informed decisions on what to buy.
When it comes to their healthcare, the client does not have specific knowledge, so they seek a physician. The physician has asymmetrically more knowledge than the patient, and in that way they act as the patient’s agent when it comes to the purchase of health services. In cases where the patient is covered by a social security plan (that means broadly that somebody else will cover the bill), neither the patient nor the doctor are interested in the cost of the healthcare services. This may lead to over-utilisation of services or, in other words, to a moral hazard to the social security system (Allart et al. 2000). This creates healthcare market failure.
Health economists are interested in how healthcare market failure can be confronted (Kenneth 1962). The issue becomes even more complicated, because the resources of the society are scarce at the same time as the needs are unlimited. Therefore societies have to allocate their scarce resources amongst health and the other goods that they provide (such as education, transportation etc.)
The question is not only how to allocate the resources amongst health and other goods, but most importantly how to allocate the scarce resources within the healthcare sector itself. Within this sector, the demand for health services is unlimited. Opportunity cost is a key concept in order to approach this issue. It has been described as expressing the basic relationship between scarcity and choice. For instance, the opportunity cost of buying a new scanner might be not to have a refurbishment of the reception area of your department. This cost of the lost opportunity of the refurbishment as a second alternative choice of the budget’s usage, represents the opportunity cost, and reassures the good or the bad use of the budget.
The notion of opportunity cost plays a crucial part in ensuring that scarce resources are used efficiently. This is because societies express major concerns about the following issues:
Thus, health economics is used to orient policies on:
Moreover, health economics evaluates multiple types of financial information, such as costs, charges and expenditures (Wonderling et al. 2005).
In this evaluation radiologists, radiographers, physicists and radiology managers must take an active part by using evidence-based knowledge about the appropriateness and the utility of the imaging services related to each particular clinical question of their clinicians or managerial fellows.
We know, for instance, that an MRI for patients with back pain typically leaves them no healthier, but it does leave them more satisfied. Is it a cost that the citizen taxpayer should bear? Everyone in a department wishes to offer the best available services to patients without thought to cost. Unfortunately, cost is tightly linked to offered services and somebody has to cover it.

The cost of health services is becoming more and more unbearable for working class people. Unfortunately, in the highest percentage of the world’s under-developed countries patients have to buy their health services out of their own pocket. It is expected that when there is no insurance coverage umbrella, only rich people or the political elite can have access to the health services. This is called an out-of–pocket payment health coverage “system”; it is practically a “non-system”.
In the European region, but also in other areas of the world, systems have been established based on re-distributional policies to equalise the financial burden of healthcare and to ensure access on the basis of need and not on the ability to pay. Broadly, these models, in the chronological order they were developed are (Reid 2009):
The Bismarck model: This model was introduced by Chancellor Bismarck in Germany around 1883. In the Bismarck model countries’ healthcare providers and payers are both private entities. The model uses private health insurance plans, usually financed jointly by employers and employees through payroll deduction, to cover everybody, and they do not make a profit. Although the Bismarck model is a multiplayer one, tight regulation of medical services and fees gives the system a strong cost–control clout.
The Beveridge model: The system was introduced in Britain around 1945. In this system healthcare is provided and financed by the government through tax payments. There are no medical bills. Many or sometimes all hospitals and clinics are owned by the government. These systems tend to have low cost per capita, because the government as the sole payer controls what doctors can do and what they can charge. The core theory of the Beveridge model nowadays can be summarised as “services can be provided to everyone, but not everything”.
The national health insurance model: This system has elements of both Bismarck and Beveridge. The provider of healthcare is private, but the payer is a government-run insurance programme that every citizen pays into. The insurance plan collects monthly premiums and pays medical bills. As a single payer covers everybody, the system tends to have considerable market power to negotiate for lower prices. The national insurance model runs as a nonprofit one.
Summarising the above in relation to radiology departments’ reimbursement we observe:
Government bodies attempting to eliminate moral hazards from free at the point of delivery imaging services have developed mechanisms, as follows:
Publicity of the protocols and the referrals criteria gives transparency to those mechanisms and reduces public criticism, and also reassures them that no-one can trespass them.
Despite all the aforementioned methods for patients’ coverage, the reality is that health services are getting more expensive, and cost control alone is not effective. Policies have to be developed aimed at improving efficiency of service delivery and use. 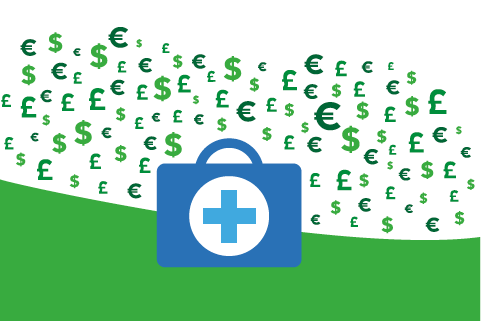 Radiology departments are units that transform inputs to outputs through the imaging process. Inputs are the medical referrals of the patients. The main aim of an imaging department is to produce the maximum possible output from a fixed resource, in other words to function efficiently. The question is what the department considers as an output and how they measure it. The key phrase here is the “maximum possible output” in relation to the “fixed cost”. It is the responsibility of everyone who is involved in the imaging services to protect the scarce resources of the system by making efficient use of them and by keeping cost to the minimum. In the health sector cost has a broad meaning beyond financial expenditures, that also includes time, education and training of personnel, availability of the imaging units around the clock, etc. (IAEA 2011).
The health service’s funding mechanisms are believed to influence the delivery and quality of patient care. Private imaging providers are looking for a considerable volume of examinations in a certain time frame, as their reward comes from the volume of examinations they provide. It is expected that fee-for-volume funding is associated with overutilisation of imaging services. The contribution of the referring physician under the possible existence of any financial incentives is unquestionable due to the asymmetric information that the physician has and the patient lacks. The existence of a health coverage system, which will later pay the bill, probably increases the volume of the prescribed examinations, as Roemer’s law states: “Under a Social Insurance payment plan, every offered imaging unit is a usable unit” (Shain and Roemer 1959).
When hospital-based imaging departments are reimbursed through global budgets they are expected to have a gatekeeper’s role, by exercising the principles of justification and optimisation (Porter and Lee 2013). Those two pillars of radiation protection are also expected to increase the effectiveness of the department by allocating imaging resources and controlling the radiation risk to patients.
A critical parameter for the effectiveness of radiological departments should be the number of accurate diagnoses in relation to the number of exams produced, booking waiting time, and the radiation dose burden delivered to patients (IAEA 2011). The number of exams performed by itself may not be an indicator of the department’s efficiency. If the reimbursement is on a fee-for-volume basis, it is expected that the interest of the department is in the volume of the exams produced in a certain time frame rather than the accurate diagnosis given to the patient’s problem. It is established empirically that money follows the patients, with the more patients treated the higher the reimbursement to the efficient, flexible providers. This should encourage departments to meet the needs of their customers, who are both patients and their referring physicians. Patients need quality services and referring physicians need an accurate report. Departments also have the task of minimising costs not only by switching to new efficient technologies, but by extending the working hours of the existing facilities, developing in this way economies of scale. Modern competitive departments must always ask themselves: Do we solve the clinical problem of the patient? How many accurate vs. inaccurate diagnoses do we produce weekly?
Everyone must start to measure value, quality and performance as we transition from a fee-for-volume to a fee-for-value performance scenario. In that case the department creates realistic expectations of the revenue it can have, as more referrers trust it, and more patients (followed by money) are using its services.
A plan for measuring and identifying weak performance areas must be established in the departments. Although “To Err is Human”, mistakes must be analysed and provisions must be taken for them not to be repeated. That procedure, when incorporated as a standard one, can be a valuable source of information, which potentially transforms the department to a learning organisation. This is the way evolving imaging departments always meet the needs of their clients. And that way the department is working effectively and efficiently.

Challenges and Opportunities Using the Example of a Radiology Department Management cannot work without defining and utilising... Read more

Whilst mammography remains the most consistent modality for breast cancer detection, it is neither foolproof nor perfect. Additional... Read more