Health and Wellbeing of the Workforce 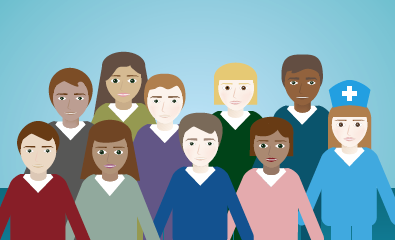 Workforce Health Must Be a Priority

The National Health Service (NHS) must work hard to protect the health and well being of its workforce. Failure to do so costs organisations across the system dearly but, more importantly, patient care may suffer. What does it feel like to be unable to do your job properly through lack of time, staff shortages or financial constraints? Today, many NHS clinicians and managers (and probably support staff too) could tell you. But they may not always make the correlation between working under relentless pressure and the cost to their mental and physical health.
In March, the BBC revealed that it had obtained figures showing that staff absences for mental health problems, such as anxiety, stress and depression, had doubled at hospital trusts across England — from 20,207 in 2010 to 41,112 in 2014 (BBC 2014). Unprecedented demand for health services means staff cannot always deliver the care they want to and the price paid may be their own health.
The NHS needs staff that are both healthy and at work in order to deliver the best possible patient care. This means staff who are neither absent through sickness nor unhealthy or present through a misguided sense of loyalty to their patients and colleagues. Looking after the health and well being of staff directly contributes to the delivery of quality patient care, but it is also the moral duty of employers.
Of course, poor workforce health ultimately carries high and far-reaching costs to NHS organisations. It is estimated that the median cost of sickness absence to each NHS organisation is 3.3 million pounds annually (Audit Commission 2011). good managers recognise that wellbeing and productivity are inextricably connected.
In August 2009, Dr. Steve Boorman’s interim report on the health of NHS staff was published (Boorman 2009). It called for “a sea change in the way in which staff health and wellbeing is perceived", and asked NHS leaders to put the health of staff “at the heart of the NHS mission and operational approach”.
A year later, the final NHS Health and Well-being Review (Boorman 2010) was welcomed by the then Health Secretary, Andy Burnham, who said that the NHS organisations needed to be exemplars in promoting the health and wellbeing of their staff. By doing this, they would “support the NHS to play its key role in promoting public health” (House of Commons 2009).

More Work to be Done

Whether the NHS has succeeded is a moot point. In 2013-14, according to the Health & Social Care Information Centre, health service workers in England took an average of 14.82 sick days, a small improvement on 201213, when the figure was 15.52 days (Health & Social Care Information Centre 2014). Significantly, however, data from the Office for National Statistics (ONS)  shows that in 2013, across the whole UK labour force, just 4.4 days per worker were lost to sickness (ONS 2014).
The publication of further workplace policy and management practices guidance from the National Institute for Health and Care Excellence (NICE)  earlier this year (NICE 2015), making recommendations on how organisations can improve the health and well being of employees, suggests that there is a recognition that there is still work to be done.
The IHM believes that making the health and well being of employees a core priority should be an absolute given for all managers, at every level across all healthcare services. The raison d’etre of healthcare provision is to improve the health of patients and the wider public, so it would be ironic if management failed to do the same for its own workforce.
In particular, IHM supports the NICE recommendations on leadership style of line managers (nice.org. uk/guidance/ng13/chapter/1recommendations#8-leadershipstyle-of-line-managers), reflected in its own Professional Practice Framework (ihm.org.uk/about-us/professional-practice-framework.html), which has optimising health and well being at its centre. Encouraging creativity, having a clear vision to communicate to employees, providing a sense of meaning and challenge in the workplace and consulting regularly on daily procedures and problems are all key components of good management and vital to the health and wellbeing of any workforce.
The guidance includes a section on fairness and justice, highlighting that “senior leadership and managers, human resource teams, and all those with a remit for workplace health should ensure any unfair treatment of employees is addressed as a matter of priority" (nice.org.uk/guidance/ng13/chapter/1recommendations#4-fairness-and-justice) This is important, since experience of unfair treatment is stressful and will impact negatively on the mental health of those who experience it.
In particular, all organisations need to ensure that they have a robust and meaningful whistleblowing policy. Without a commitment to fairness and justice, fear of bringing failings in care to the notice of management will cause employees anxiety, as well as proving a stumbling block to service improvement.
Last month saw NHS England announce a five million pound drive to support NHS organisations help their staff to stay well through initiatives such as serving healthier food, promoting physical activity, reducing stress, and providing health checks covering mental health and musculoskeletal problems (NHS England 2015).
Announcing the move, NHS England Chief Executive Simon Stevens said: “When it comes to supporting the health of our own workforce, frankly the NHS needs to put its own house in order" (NHS England 2015).  He is right and these are important first steps. Success, as ever, will be dependent on clear leadership from managers who, in implementing change, must be cognisant of their own health and well being.

Workforce Planning – Can we Face the Future Without it?

Workforce planning aims to creat a sustainable workforce that is centred around patient need, provides quality outcomes and... Read more

Urban Health and Wellbeing in the Contemporary City

This paper explores and debates the intricate connection between our built environ- ment and an increasingly technocentric... Read more

Medical imaging is uniquely positioned to play a pivotal role at many points in the cancer patient journey, from early detection... Read more

The Older Patient: Ehealth and Mhealth Approach in Today's Context of Demographic Ageing

Background  The demographic trends projected over the long term reveal that Europe is ‘turning increasingly grey’ in the... Read more

workforce, health, wellbeing, costs Health and Wellbeing of the Workforce: Shirley Cramer of the IHM argues that a healthy workforce means well cared for patients.