Effects of smoking on carotid artery structures and haemodynamics

Role of radiographer in ultrasound assessment.

A study to assess and compare structural and haemodynamic parameters in carotid arteries in smokers and non-smokers using ultrasound.
The goal of this research was to assess the effect of tobacco on structural and haemodynamic parameters in carotid arteries. 103 subjects (51 smokers and 52 non-smokers) were evaluated by a trained radiographer using ultrasound equipment. The smokers group was divided into four different categories depending on the number of cigarettes smoked per day. Several parameters were evaluated by B-mode and pulsed Doppler images acquired in longitudinal and transverse sections of the common carotid arteries: intima-media thickness (IMT), peak systolic velocity (PSV) and end-diastolic velocity (EDV). Our results suggest that smoking has negative effects on carotid artery structure and haemodynamics, and female smokers are more likely to develop vascular changes. Smoking is a risk factor for alterations in carotid artery haemodynamics.

Smoking is associated with several pathologies, such as atherosclerosis or strokes, and is the cause of death of millions of individuals worldwide (World Health Organization 2008). For this reason, it´s crucial that smokers are screened to prevent major complications.
Many studies demonstrate an association between strokes and abnormalities in the common carotid arteries. Harris assessed the common carotid arteries of 259 subjects with a history of previous stroke, and concluded that intima-media thickness was associated with the presence of neurovascular pathologies (Harris 2012). In another study, where the objective was to compare severity of carotid stenosis and the dimension of the brain ischaemic lesion, it was observed that the percentage of the stenotic lumen may be a good predictor for the quantity of ischaemic brain tissue (Alagoz et al. 2016).
The Australian National Stroke Foundation (2010) recommends that individuals with suspected vascular lesion should have imaging studies performed. Other organisations, including the American College of Cardiology Foundation, American Heart Association, American Academy of Neurology and the Society of Cardiovascular Computed Tomography have developed guidelines for the control of groups with carotid and vertebral vascular pathologies. These organisations recommend ultrasound examinations in asymptomatic individuals with suspected carotid stenosis, screening for any haemodynamic changes. This procedure must be repeated every year to evaluate lesion progression or therapeutic response (Brott et al. 2011).
Hedna et al. (2013) tried to understand stroke mechanisms with the objective of assessing the frequency, severity, functional outcome and mortality when lesions occur in the right and left brain. A higher incidence was found in the left brain, and the highest mortality rate was in those patients who had lesions that occurred in the left cerebral territory. Selwaness et al. (2014), in their study of the prevalence of atherosclerosis plaques, severity and composition in the common carotid arteries, showed that 85% of the individuals studied had bilateral atherosclerosis plaques. Unilateral plaques were more likely to appear in the left carotid artery. The authors concluded that these lesions are not distributed symmetrically, being more prevalent and unstable in the left carotid artery.
Based on this, it is crucial to implement a methodology to control population risk. The goal of this study was to assess and compare structural and haemodynamic parameters in carotid arteries in smokers and non-smokers using ultrasound, as it is a fast and economic imaging technique, with no ionising radiation.

The target subjects were male and female individuals, smokers and non-smokers. The inclusion criteria were individuals aged between 20 and 40 years old with unknown diseases, so risk factors such as cholesterol, hypertension and dyslipidaemias could not influence the results. This age interval was suitable as vascular wall thickness increases with age.
The final sample included 103 volunteers: 51 smokers and 52 non-smokers.
The ultrasound equipment used a 7.5MHz probe and dependent variables were defined: (1) intima-media thickness (IMT), (2) peak systolic velocity (PSV) and (3) end-diastolic velocity (EDV), as well as independent variables: (1) the average number of cigarettes smoked per day and (2) gender.
For the exam protocol the volunteers assumed a supine position with a pillow under the cervical spine for an extension of the neck to facilitate the approach with the probe. B-mode images were acquired in longitudinal and transverse sections of the common carotid arteries. IMT measurements were performed about 1.5 cm below the carotid bulb. Also, in this location, using pulsed Doppler, the PSV and EDV measurements were acquired. All image acquisitions and measurements were made by a trained radiographer in sonography.
The smokers were divided into four categories, according to the number of cigarettes smoked per day (Table 1), as described in Bjartveit and Tverdal (2005), whose study was to determine the risk of developing a tobacco-associated pathology in men and women smoking from one to four cigarettes per day. The arithmetic means of each dependent variable (IMT, PSV and EDV) were performed for each category and were compared to each other. Evaluations of these averages were also made for each gender (male and female). 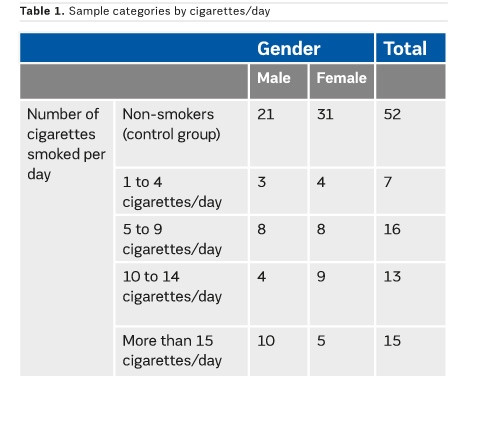 Figure 1 shows the mean IMT in the control (non-smokers) group and in the smokers group. There is a significant difference in the mean, with smokers having a higher average. 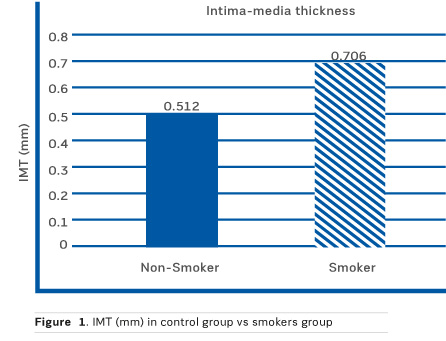 Figure 2 shows the PSV and EDV of the control group compared to the smokers group. Both have a higher value in smokers. 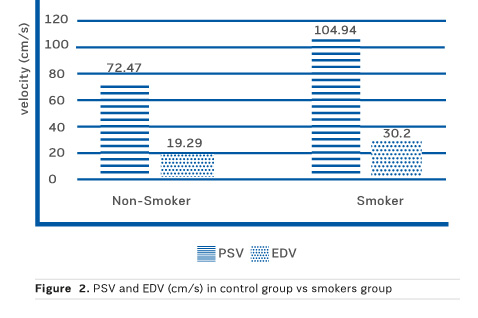 Figure 3 shows the differences in IMT between male and females, non-smokers and smokers.

Figure 4 shows the comparison between PSV by gender, in non-smokers and smokers. There is an overall increase of PSV in the smokers group.

Figure 5 shows the EDV values by gender, in non-smokers and smokers.

The exponential increase of tobacco consumption in the world, especially in younger age groups, is already considered a serious problem. With these smoking habits growing among the young population, it is expected that in the near future this population will need an easy and accessible diagnostic tool for screening and controlling alterations caused by tobacco.
Similar results for IMT and PSV have been reported in previous studies, however these authors described EDV values inversely proportional to the number of cigarettes smoked per day (Mahmoud 2012; Alzimami et al. 2014; Recio-Rodriguez et al. 2013).
These results verified that tobacco consumption will increase the thickness of the intima and tunica media, as well as the value of the systolic peak and diastolic value. It should also be noted that the number of cigarettes smoked per day will be central to the severity of the changes presented since increasing the number of cigarettes smoked per day will intensify the associated changes. For this reason, the group of smokers who smoked more than 15 cigarettes per day was the one that presented higher values in the study variables. Females also appear to be more likely to acquire structural and haemodynamic changes induced by tobacco compared to males.
The data from this study suggest that smoking has negative effects on carotid artery structure and haemodynamics. Radiographers qualified in sonography can play a key role in the detection of pathophysiological changes in a preventive perspective.

Radiographers on the Frontline

Charitable Institutions During the COVID-19 Pandemic: The Pisa Experience

How Agfa’s SmartXR puts artificial intelligence in the technician’s hand to boost efficiency, consistency, safety and care in... Read more

Separate and concentrate― a sustainable business model for general hospitals?

Reducing management complexity in patient care. Research shows how to optimise and streamline care in the hospital... Read more

What is the future of breast cancer screening?

Αdvances in technology and the advent of precision medicine point to a move away from ‘one size fits all’ breast cancer... Read more

Ultrasound, smoking, radiography, haemodynamics A study to assess and compare structural and haemodynamic parameters in carotid arteries in smokers and non-smokers using ultrasound.