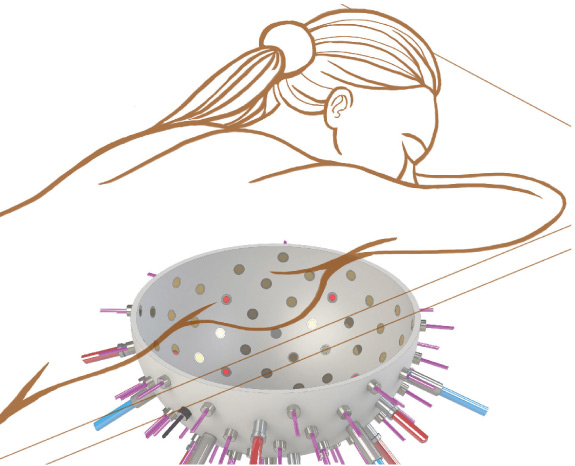 Today, techniques for detecting breast cancer, ie x-ray mammography, ultrasound and magnetic resonance imaging (MRI ), have several disadvantages. One of the most important ones is that they cannot clearly distinguish a tumour from a benign abnormality or even healthy tissue. The end result is that often tumours are missed or unnecessary biopsies have to be carried out. A European research consortium is to receive a grant of 5.1 million euros from the European Union and the Swiss government to develop a new imaging device that is expected to improve and accelerate the diagnosis of breast cancer. More specifically, it will provide improved photoacoustic and ultrasound imaging and will also combine the images generated by both techniques. The device, which has been dubbed ‘PA MMOTH ’, is expected to be ready for largescale testing and production in four years. Project leader Srirang Manohar gave an interview to HealthManagement. org about the benefits and advantages of the proposed device over existing technologies and the expectations of the team of researchers.

A range of proven technologies already exists for the diagnosis of breast cancer - 2D and 3D mammography, MRI and ultrasound. Why is this new device needed and what benefits are anticipated?

X-ray imaging uses ionising radiation, involves painful breast compression and has poor performance in younger women or women with higher glandular tissue in their breasts, the so-called dense breasts. Ultrasound is ubiquitous in the breast imaging paradigm as an adjunct to x-ray imaging, being real-time and showing anatomic features, but is not always able to differentiate between malignancies and benign lesions. Magnetic resonance imaging (MRI) has high sensitivity for breast cancer detection, but suffers from limited specificity, is expensive and requires contrast agents.

What advantages does photoacoustic imaging bring for breast imaging?

Photoacoustic imaging uses light as excitation energy, but, rather than detecting light which is heavily scattered, ultrasound is detected to study the optical absorption contrast. The mechanism of signal generation and detection is as follows: short pulses of near-infrared light are shone on the breast. Some of the light is selectively absorbed by blood in the strongly vascularised tumor. The absorbed optical energy is converted to heat and results in a localised increase in pressure due to thermal expansion. This pressure spreads out as acoustic waves, which have frequencies very similar to those in ultrasound imaging. These pressure waves can thus be detected by ultrasound detectors.

Photoacoustic imaging, when implemented in the PAMMOTH imager, will allow the tumour to be displayed due to the high blood vessel density around it. Furthermore, the use of multiple wavelengths of light excitation combined with a robust mathematical analysis will give tumour-specific optical contrast including oxygen saturation of tissue. This may provide information regarding the metabolism of the tissue allowing differentiation between malignancies and benign lesions. However, photoacoustics alone cannot provide anatomic information, which is why we included ultrasound imaging.

Thus, we developed a hybrid of the two methods in our proposed PAMMOTH imager in order to provide images of anatomical features and the extent of tumours using ultrasound imaging with overlaid photoacoustic images of tumour vascularity. The imaging system thus generates information that is complementary making the system multimodal. So, instead of layered imaging as is used now, we have two imaging modalities in one instrument.

What evaluations on diagnosis compared to existing technologies will be performed before the anticipated production begins in 4 years (2020?) Will there be randomised controlled trials (RCT)?

We will have the clinical prototype in 3 years. We will not be doing RCT within the period of the project. The last 9-12 months of the project will be devoted to first clinical feasibility studies on a limited number of patients. We will compare our images with conventional imaging from x-rays, ultrasound and MR. The gold standard regarding the diagnosis will be from histopathology.

Do you anticipate that the "dream imager" will improve on the kind of false negative and false detection rates seen with existing technologies?

Yes, that is indeed our ambition, and that is why we intend to develop hybrid photoacoustic-ultrasound and build in various functionalities that will generate information which should help the radiologist to make more accurate diagnoses.

We are aiming to perform region-of-interest (ROI ) imaging in real-time. Detailed functional images will be available only offline. The question about image reading is a difficult one, since there is very little clinical data available at the moment using photoacoustics, so it is not yet fully known how to interpret images.

Meet pioneering gynaecardiologist Angela Maas, who explains why there's still a lot to do when it comes to cardiovascular disease... Read more

A Successful HR Strategy in Healthcare

photoacoustic imaging, ultrasound, breast cancer Interview about a new imaging device that is expected to improve and accelerate the diagnosis of breast cancer.