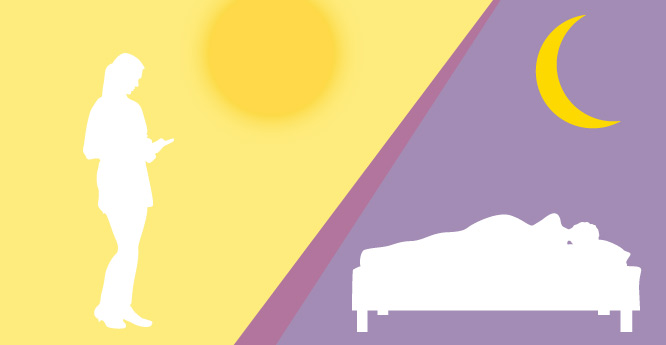 The Circadian rhythm dictates that living organisms sleep during the night and are awake during the day. This internal autonomous function ensures adequate rest, avoidance of emotional disorder and the reduction of future morbidity and mortality.

Ideally the work timetable is adapted to the Circadian rhythm, but there are certain professional groups for which this is difficult within current conditions and the applicable legal framework. The medical profession falls into this category. The rolling working hours and insufficient relaxation time often mean staff are unable to work and rest in line with the Circadian rhythm. This situation has negative consequences, such as the full deregulation of Circadian rhythm in these professional groups and the disorder of physiological balance between work and rest (Garbarino 2014; West 2001). This is a situation that has been exacerbated in working conditions in recent years owing to the burden of fiscal adjustment and the effects on the medical profession especially in the Greek health system.

The deregulation of the normal secretion of the melatonin hormone, instrumental in managing sleep cycles, is thought to be the actual cause of any pathological consequences for occupational groups in medicine. If the portion of the brain where the melatonin secretion is regulated is damaged, then the Circadian rhythm disappears.

As to the psychological impact, nurses are a high-risk population for depressive symptoms regardless of the rolling schedule. For example, according to one study, in a relatively large sample (n=3474) the incidence of clinically significant symptoms was recorded at 38 percent. Indeed, this study confirms the aggravating role of a rolling schedule, since those working on rotating schedule for two or more nights a week had a statistically more significant probability of clinically significant depressive symptoms than those not working on rotating schedule (Gong et al. 2014). These findings are confirmed in an earlier study of the nursing population by Skipper et al. (1990) and in a study which found that depressive symptoms affected in turn identical nursing work by reducing staff durability in work in staggered shifts (Jung and Lee 2015).

Moreover, depressive symptoms of rolling schedules seem to trigger a wider range of psychopathology. According to the results of various studies, professionals who work on rotating shifts have a higher probability of clinically significant anxiety and sleep disorder (Flo et al 2014; Oyane et al 2013). As a result of exhausting hours, burnout syndrome is triggered. Burnout is defined as physical fatigue and the psycho-emotional exhaustion of the worker (Skouteli 2010). This is considered a concerning situation since the reputation of health institutions is impacted by poor care.

In terms of physical morbidity, the first symptom appears to be tiredness (Øyane et al. 2013) followed by a series of psychosomatic and musculoskeletal problems (Nicolleti et al. 2014) and chronic, potentially fatal bodily diseases. Specifically, a large epidemiological study in the USA revealed that those who worked more than five years in rolling schedules had a greater chance of death due to cardiovascular problems and other causes than those who were not working in rotating shifts (Gu et al. 2015). Researchers from Mount Sinai Hopsitals in the USA reported at the American Heart Association meeting in 2014 that the toxic combination of fatigue, frustration and irritability from exhausting work increased the risk for cardiovascular disease by 36 percent (Onmed.gr 2014). In terms of cancer, Gu et al.’s research confirmed a causal relationship only with lung cancer not overall cancer mortality (Gu et al. 2015). The Mount Sinai researchers also showed that people who experience constant disruption of the Circadian rhythm and experience intense stress and fatigue smoke and eat more unhealthily as they are seeking ways to address the situation (Onmed.gr 2014).

Circadian rhythm disorder has a strong negative impact on the health and lives of medical staff employed mainly on rolling schedules. It is possible that there may also be an increased prevalence of psychological disorders uninvestigated to this day in this population (eg, excessive anxiety, sleep disorder, panic attacks).

Therefore either policies towards minimising rolling timetables and working hours should be implemented along with six-hour rather than eight-hour days (as in Sweden), or introduction of increased and regular rest periods should be considered.

There is a need for practical and practicable strategies to be created at management level, with training and education through management programmes and the establishment of control and monitoring with periodic stress test programmes for employees.

Indeed, both because of the probability of error on the part of the professional and of increased morbidity, health systems may be burdened with a much heavier load in the future.

It is essential that the issue of Circadian rhythm burnout is addressed at a management and policy level in order for the quality of services and the integrity and sustainability of health systems throughout Greece and Europe to be sustainable.

Øyane NM, Pallesen S, Moen BE (2013) Associations between night work and anxiety, depression, insomnia, sleepiness and fatigue in a sample of Norwegian nurses. PLoS One, 8(8): e70228.

The Importance of Continuous Education in Healthcare

Fraud in Healthcare: A Worldwide Concern

Affidea is an international healthcare provider focused on advanced diagnostic imaging and cancer care. We are the largest independent... Read more

Securing a hospital round the clock is a tough job. But a rapidly maturing technology is perfectly built for the task, writes... Read more