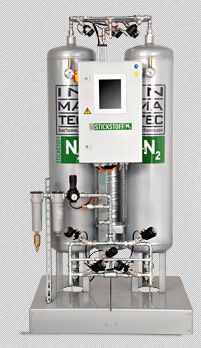 PAN process: efficient regulation of nitrogen requirements The INMATEC PAN technology is based on the PSA adsorption principle. Purified compressed air flows through the adsorption vessel in the pressure swing adsorption process. A specially refined activated carbon molecular sieve binds the small oxygen molecules, whereas the larger nitrogen molecules pass through unhindered. Carbon dioxide is also bound and thus does not end up with the nitrogen that is produced. The pressure changes to the second adsorption vessel only once the activated carbon, which acts as an adsorption medium, is fully saturated with the oxygen molecules. The first adsorption vessel regenerates itself in the meantime. The approach ensures a continuous production of high to ultra high purity nitrogen. An innovative TCP control from INMATEC allows an almost complete utilisation of the adsorption potential. Pure nitrogen gas flows into the product tank as a result. The very dry and high purity nitrogen can subsequently be used in the production process immediately.
× × × × × × × × × × ×
[email protected]
Gewerbestr. 72,
82211 Herrsching
× × × × × × ×

Precision medicine has been an important goal in healthcare. Researchers... Read more

Family Presence for ICU Patients During a Pandemic

The effects of critical illness on patients and their families last long... Read more

Has the Pandemic Given Telehealth a Boost?

Researchers Found That Use of Patient SafetyNet with Masimo SET® Pulse... Read more