Moderated by Dr. Ralf Michael Schmitz, EAHM Education and Training, the ceremonial opening of the ceremony began with an outline of this year’s theme ‘Health Sector: Our role and responsibility’. Achieving a balance between the ethical responsibilities of healthcare and the economic factors in evidence represents a daily challenge, and as Dr.Schmitz explained, this congress aims to provide the opportunity for discussion and a platform for the exchange of ideas. 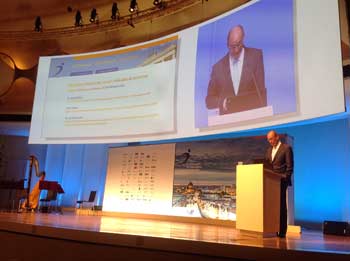 He then introduced Dr. Josef Düllings, President of the German Association of Hospital Managers (VKD), who in turn welcomed and thanked the participants, organisers and sponsors of the congress. As this EAHM congress was being held on a European level, Dr. Düllings pointed out that Europe got its name from Greek mythology, Europa meaning ‘wide-gazing’, and he suggested that the emphasis of the event be placed on looking ahead and identifying solutions for improved quality of care in the years to come. 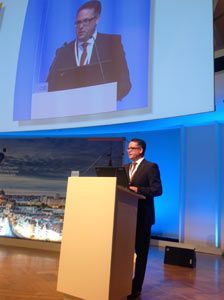 Heinz Kölking, President of the EAHM, then took to the stage and highlighted the fact that this year’s congress is the 25th, an anniversary shared with the fall of the Berlin Wall. Europe has undergone significant changes in recent years, and the past five years have shown a fundamental shift in the general direction of European politics. EU regulations and institutions are being increasingly criticised by the member states. The current political constellation opens an increased role for the EAHM association, and Mr. Kölking sees opportunities towards change of the current structure of healthcare. Changing demographics, increased competition, lack of qualified staff and more stringent quality requirements are making the environment ever more complex. According to him, both national and EU standards are responsible, and a balance needs to be found between the influencing factors such as the EU working time directives, the patient mobility directives, and local competitive factors. The debate cannot be purely ideological. Ideally, EU member states will work towards established goals within their own local set of conditions. Within this context of change, each hospital needed strategies and strong management to achieve this, Mr. Kölking concluded. 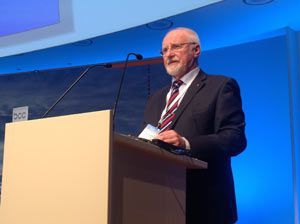 He handed over to Mr. Eric de Roodenbeke, CEO of the International Hospital Federation, who offered a presentation entitled ‘Hospitals: Facing Austerity and Ageing’. The OECD perspective of austerity for healthcare will remain in place for the foreseeable future, which makes management ever more important. Current healthcare trends are not sustainable, and the major reason in the change of pattern of care and age is the upcoming big ‘Silver Tsunami’ wave. Ageing and multichronic conditions are impacting healthcare and creating a burden of disease in the developed world. The role of hospitals in healthcare expands across multiple dimensions, and according to Mr. de Roodenbeke, there is no one-size-fits-all solution, as location, culture and infrastructure play a significant role in each individual country’s challenges. 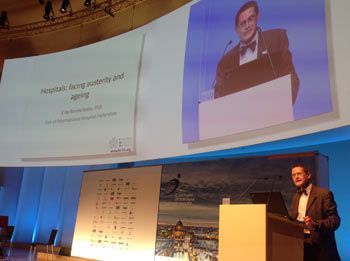 The next speaker was Mr. Lutz Stroppe, Secretary of State, Federal Ministry of Health, Germany, who pointed out that the healthcare industry had an increasing responsibility for quality and economic efficiency in the country’s economy. With over five million employees, the healthcare sector was the largest economic contributor and, as a consequence of its recent growth, had overtaken the automobile manufacturing industry in terms of employment. Ageing factors are influencing future dynamics, however, and to sustain the current high standards and extensive catalog of services, Germany needed to concentrate on three tasks: defining the true need for patient-centred care, allocating financial means efficiently, and embracing innovative framework and digital technologies. There was a need to keep the focus on people and not to divert the attention to technology, as was frequently the case. He added that healthcare could learn from other industries, and concluded that the hospital reform would present concrete suggestions by the end of the year for law proposals to be handed in for 2015 in time for implementation by 2016. 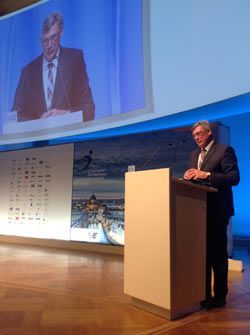 Mario Czaja, Senator for Health and Social Affairs, Berlin, followed Mr. Stroppe’s presentation with an overview of the role that healthcare plays in Berlin. In recent years, Berlin has grown in importance for this sector, with an increasing number of pharmaceutical and medical companies establishing a base in the city. Within the past year alone, this has led to the creation of 5000 new employments in areas of life sciences, technologies, research and extended healthcare. Mr. Czaja pointed out that due to differences prevalent in each locality in Germany, discussions on a nationwide level made very little sense. He explained that government allocated hospital investment varied between €60 and €18 per inhabitant, depending on the city, and concluded that geriatric care would need to become the focus in the years to come. 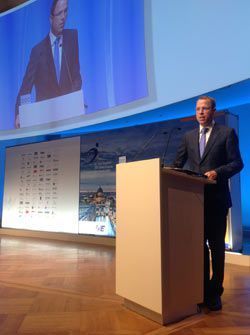 The informative speeches and presentations were replaced by the musical sounds of ‘Classic Quartett’ at this point. Four very talented young ladies, who performed a beautiful interlude with a harpe, a cello, a violin and a flute, took centre stage. 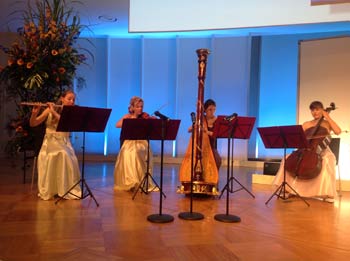 It was then the turn of renowned future researcher Leo A. Nefiodow to present his work on  ‘The Sixth Kondratieff – The New, Long Wave of the Economy’, as announced via our Healthmanagement.org news channel back in June 2014.
This in-depth presentation highlighted the new value chain biotechnology as the driving factor behind the new wave, with a need for a holistic approach to medicine presenting a number of opportunities for hospitals. For further information on this topic, we recommend the Kondratieff website and Wikipedia entry on that topic. 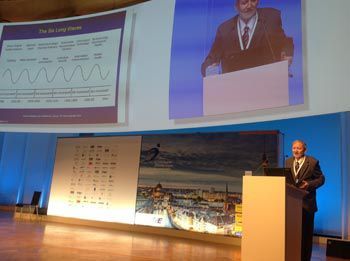 Becker’s Hospital Review recently published tips on how hospitals in the U.S. could improve their Hospital Consumer Assessment... Read more

Focusing on ways of reducing power consumption through green energy production methods is one key way of reducing the bills for... Read more