The Economic Benefits of Antibiotic Management in Hospital: An Economic Analysis

Alastair Gray
Health Economics Research Centre
Department of Public Health
University of Oxford
[email protected]
Infections in hospital are challenging to manage and are costly for healthcare systems. Following control of acute infection, discharge into the community may be feasible, with or without continuing antibiotic therapy, oral antibiotic therapy, or intravenous infusion therapy. However, although many health systems are committed to moving care out of hospital and closer to home, there remain substantial numbers of patients in hospital who could be discharged, given the right circumstances and management.

A series of service evaluations was therefore conducted to assess how an antibiotic management and Early Discharge
(ED) programme might affect NHS resources and patient pathways in such patients. These service evaluations were exploratory studies conducted in a sample of Trusts/Health Boards across the UK, and were designed with the intention of providing information on antibiotics used, the scope for changing antibiotic therapy, including IV antibiotic therapy, and an
assessment of whether discharge from hospital was feasible. Full clinical and economic details of this study have
previously been published. Using data collected from these evaluations, an economic analysis was conducted, which estimated the potential cost consequences of changing antibiotic therapy, earlier discharge dates, and more community support. These estimates in turn permitted an assessment of how much might potentially be saved if antibiotic
management and early discharge to the community had been implemented in this population.

Following costing conventions, appropriate unit costs were then attached to the resources used, in order to calculate
a total cost per patient. These came from national published sources and are fully documented in previous publications. Antibiotics used were costed on the basis of net ingredient costs reported in the 2010 British National Formulary, and the costs associated with IV administration of antibiotics in hospital were taken from a Dutch study. The mean resource volumes
and costs were then calculated for everyone in the study population, based on what would have happened had the antibiotic therapy been switched, had patients been discharged if appropriate, and if community support services had been provided.

The six hospital sites yielded 429 patients on antibiotics, but one site (Sheffield) could not provide information on discharge dates of patients. As a result, the economic analysis was conducted using 291 patients on antibiotics in five hospitals. Summary data are given in Table 1. The main specialties were general medicine (n=134, 46%) or general surgery (n=91, 31%). Patients were mainly living with their family (61%) or alone (27%). Average age when assessed was 69 years, and 29% of the
sample were aged 80 or older. 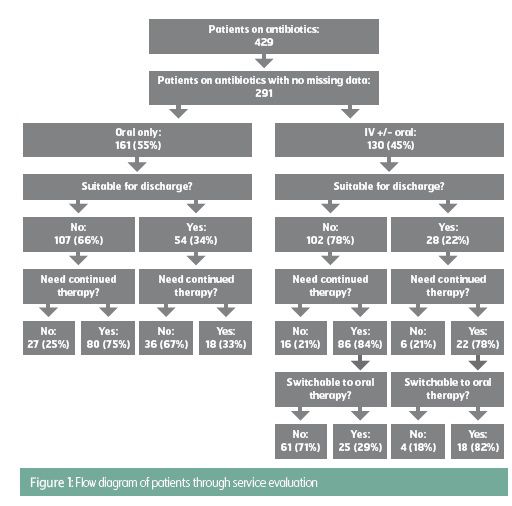 A summary of the results of the assessment is given in Figure 1. 82 patients (28%) were assessed as suitable for discharge,
of whom 54 (66%) were on oral antibiotics and 28 (34%) on IV antibiotics; in 4 instances earlier discharge would only have been feasible if Outpatient Parenteral Antibiotic Therapy (OPAT) services were available. In total, 150 (51%) of the 291 patients assessed were considered suitable for stopping or switching their current antibiotic therapy.

Some patients had long lengths of stay which may have had a large influence on the total number of bed-days and potential days saved. To assess their effect, the eight patients having the largest impact on potential bed-day savings were excluded from the analysis: this resulted in savings falling to £363 per patient, but this remained highly significant (95% c.i. £261, £465).
Similarly, increasing or decreasing by 25% the assumed cost of providing an OPAT service (£151.8 per person per day) had little effect on the overall results, changing the net saving per person to £667 or £657.

In this study the objective was to quantify the potential benefits in economic terms of an antibiotic review and early discharge assessment. Using data collected in a wide range of different hospitals and specialties and for a range of patients, the study found that 28% of patients assessed could be suitable for early discharge, and that another 23% of patients could have had their current antibiotic treatment either stopped or reduced. Conducting such an assessment, and providing some additional
out of hospital support services, would of course involve some added costs, but these would be just a small fraction of the potential savings. Reductions in lengths of stay arising from earlier discharge were the main source of potential savings.

In practice, in-patient days saved might not result in cash savings, but from an economic perspective they can be viewed as opportunity costs: earlier discharge of some patients may allow waiting times for other patients to be reduced, for example.

While the potential savings from such a scheme would mainly benefit hospitals, the additional costs involved would fall mainly on community service budgets. Service commissioners would need to recognise these issues to ensure fair outcomes and correctly aligned incentives. Similarly, early discharge schemes could reduce costs falling on the formal health services, but increase the burden on family and friends. This study was unable to collect information on such issues, which would be a valuable focus for further research.

If such interventions were being fully evaluated, they would also have to take into account their impact on health outcomes
such as quality of life. Recent years have seen other initiatives to improve antibiotic stewardship, such as self-assessment toolkits. But many audits and official reports still proclaim the need for improved antibiotic management. Focusing on the potential cost savings reported in here as arising from formal antibiotic review might increase the incentive to introduce such policies.

Finally, the pressure to innovate would be enhanced by evidence from randomised trials or case-control studies: the results reported here are illustrative and need to be confirmed in a rigorous experimental study design, but they do suggest that such a study might well be worthwhile.

Gray A, Dryden M, Charos A. Antibiotic management and early discharge from hospital: an economic analysis. Journal of Antimicrobial Chemotherapy. 2012;67(9):2297-302.